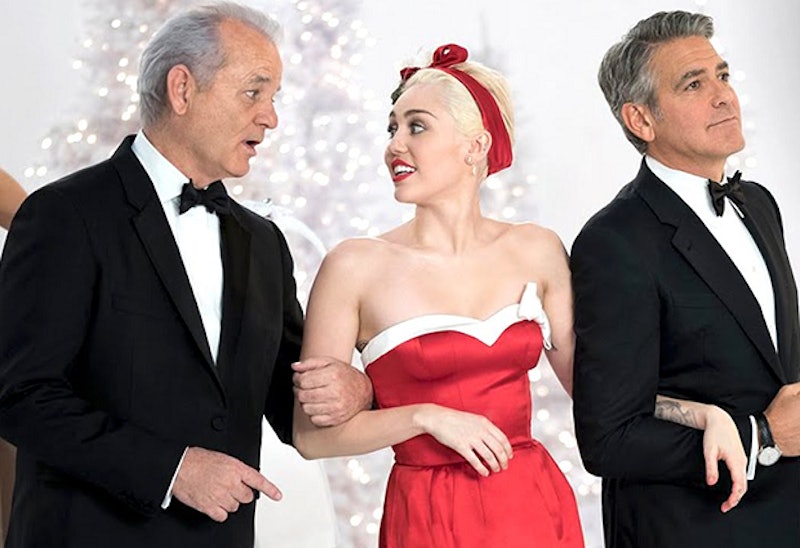 It's the most wonderful time of the year, and it's time your Netflix queue reflected that. With the 2016 holiday season right around the corner, the best way to get ready is with a Netflix Christmas movie marathon. Specifically, one in which all you need is an account and a bit of holiday cheer. But to keep you from having to search the streaming site all day and night, this list — which isn't so much naughty, but definitely very nice — should make your next holiday marathon a slice of fruitcake.

While the selection is always changing, you'll never run out of holiday movies to watch to get you in the holiday spirit. There are animated features to make you feel like a kid on Christmas morning. There are Hallmark classics that will always have a happy ending and a lesson to go with them. There are documentaries that delve into the different aspects of the holiday, from tree sellers to fanatics to rodeo cowboys. Not every movie is going to be your favorite, but it's safe to say whatever you choose to watch will make you laugh, make you cry, and make you believe in something more than Santa.

Grab yourself a cup of hot chocolate and all the marshmallows you can find. It's time to find your holiday cheer, courtesy of Netflix.

No Christmas would be complete without this classic, which will have you dreaming of a snow-filled holiday in no time.

Make this Netflix original, starring Bill Murray and directed by Sofia Coppola, a holiday classic by watching it again this year as many times as you'd like. That duet between Murray and George Clooney is a gift that keeps on giving.

If you need a laugh this Christmas, cuddle up with Ernest, and his elastic face that will make any holiday funnier.

Pour yourself of a glass of good cheer (or whiskey) and enjoy this satire of very '90s Christmas specials. You'll feel all the spirits of Christmas, if you know what we mean. Yep, it was a pun.

Because sometimes your holiday needs a dose of weird, and Pee Wee is the perfect person to give it to you.

On the first day of Christmas, Amy Smart finds out that she can't stop reliving her Christmas Eve date. Luckily, it was with Zack Morris himself, Mark-Paul Gosselaar.

If you're allergic to Christmas cheer, check out this 2014 film that tells the tale of a guy who sells trees and hates the holidays.

Anna Kendrick stars in this quirky Christmas story that focuses on a girl needing to start over, and the effect it has on her sister-in-law.

With this triple feature, let Mickey Mouse teach you that Christmas isn't about presents; it's about family.

This holiday season, add a little love into your life with this modern Christmas classic that proves Hugh Grant has some moves.

A mysterious kiss in an elevator leads to a Cinderella-like love story that feels as magical as Christmas itself.

Denis Leary is a cat burglar who has met his match with a dysfunctional couple that will put the "fun" in your Christmas.

A dog helps a forgetful Santa remember the magic of the holiday and what he means to it.

You'll be laughing, crying, and singing along to this Murray classic that puts a new spin on Ebenezer Scrooge's Christmas story.

This animated film gives the snowman with a corncob pipe and a button nose and two eyes made out of coal an origin story.

Need a getaway, but can't afford to travel this holiday season? Then live vicariously through Kate Winslet and Cameron Diaz in this 2006 film.

For those going back home for the holidays, let this be your guide. Or not. Either way though, it's worth watching this holiday season.

Watch this remake of the 1947 classic and reminisce about the simpler times when Mara Wilson was just a kid. Yup, we're all getting old.

Not a fan of Christmas? Prefer to stay home on New Year's Eve? Don't really like St. Patrick's Day either? Well, then watch this 2016 short film anthology that looks at the horrors of holidays in general.

This documentary looks at those who sell Christmas trees on the streets of New York City and what they mean to the neighborhoods they serve. Light the tree and grab some tissues, you're going to need them.

Boycotting Christmas isn't as easy as Jamie Lee Curtis and Tim Allen expect in this holiday comedy that may have you rethinking your own holiday cheer factor.

Pete is not very lucky, but he's trying to change that all in the name of Santa in this Groundhog's Day-like Christmas flick for teens.

This Netflix original documentary looks at those Christmas obsessives who are in the holiday spirit all year long. Like, literally.

In this Hallmark Original, a soldier on leave from Afghanistan finds a letter that leads to an unexpected love connection. It will have you crying in no time. Don't fight it; just lean into it.

Evie has two choices: Go to Hollywood and start her music career, or stay in Balsam, TN to save her family's Christmas tree farm. Hmm, wonder what she's going to choose in this holiday movie.

When a rebellious teen lands at her grandma's ranch during the holidays, she bonds with a horse who needs her help. This is perfect for the horse lovers who think reindeer get to have too much Christmas fun.

Need something to believe in? How about a little girl named Noel who has the power to achieve great things.

Sure, the title gives a sense what you're getting with this holiday rom-com, but the added bonus is a sweet take on female friendship, marriage jitters, and raising kids as a single mom.

The adorable St. Bernard is here to help Santa — and likely slobber all over his suit.

Seriously, good luck finding your family after they get lost en route to Palm Springs, Charlie.

There's a boarding school mystery to be solved this Christmas, and Mandie is on the case.

Add a dose of spookiness to your Christmas with the friendliest ghost around.

That title seems to say it all. But it may be worth watching to see if you know more, right?

Based on a Norwegian fairy tale, one little girl needs to track down the Christmas star so that she can free a hidden kingdom and the princess who is trapped there.

With pressure from her family to get married, Charlene finds a fake fiancé who may be more than she bargained for. Isn't that always how it goes?

For Bronies and non-Bronies alike, let these little ponies help you make this holiday season magical.

The Abominable Snowman and his two kids are on the run from a scientist trying to kick them out of their Colorado town. Seems like someone needs to learn a little something about tolerance this Christmas.

Did you know Christmas is the busiest time for rodeo steer wranglers? Just one of the facts you can wrangle from this documentary.

A talking dog tries to help a naughty boy get on the nice list. But does he really have the Herculean strength to turn this kid around?

From this very punny title, you may have guessed it has something to do with a mule. But this specific mule is going to help Santa defeat a goblin. Your guess is good as mine, honestly.

Go Down Under this Yule with a tale about two brothers who need to save their penguin pal before Santa comes.

Need a little ha-ha instead of ho-ho? Then check out this comedian's special, which pokes fun at all those '70s variety shows.

Enjoy a little time-traveling this holiday season with a movie that wants to help you remember why you love Santa so much.

A sheriff who hates Christmas arrests a guy who claims to be Santa. And that's where the adventure begins.

Santa gets arrested, and it's one little boy and his dad's mission to save Christmas.

Ring in the new year with Winnie the Pooh and Tigger, too. Maybe ask Eeyore to stay home this time.

When a little boy tries to take over for Ol' St. Nick, he realizes those are some tough boots to fill.

Hi-ya your way into Christmas with this adorable holiday special that is filled with panda hijinks.

How does he fix it? Well, you're going to have to watch and find out.

Marathon through some of Dreamworks' best holiday movies, starring Shrek, How to Train Your Dragon's Hiccup and Toothless, and the animals of Madagascar.

No spoilers here, but Santa's evil twin gets ahold of a magic crystal which helps the real Santa make his deliveries. Yep, we need to know more too.

Make yourself a cup of hot cocoa with marshmallows, grab yourself a blanket, and snuggle up by this very realistic-looking fire.

For those who can't wait until December to get in the holiday spirit, always remember that on Netflix, it's Christmas all year round.