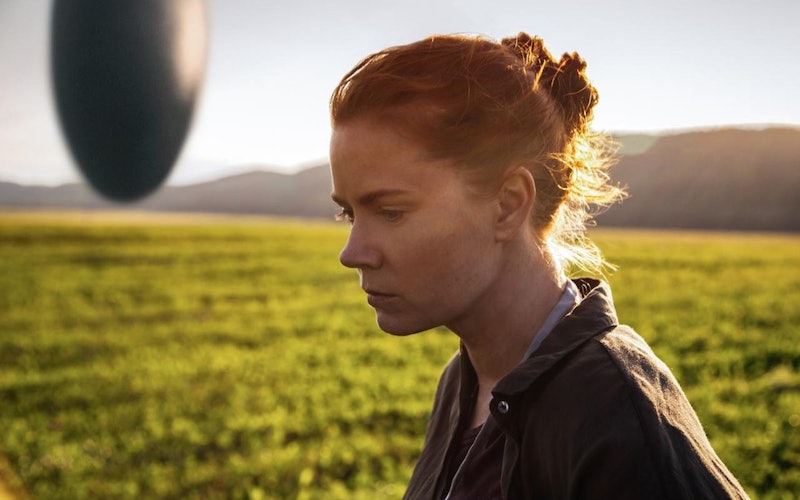 It's not often that a science fiction movie comes along with as much critical acclaim as the new film Arrival. As of this writing, the movie has a perfect 100 percent rating on Rotten Tomatoes after 60 reviews; with critics praising the film's philosophy, emotion, and the performance of star Amy Adams. But even though it may be a prestige film, at the end of the day it's still a movie about an alien invasion. So is Arrival scary?

It probably depends on what you're afraid of. The movie is not meant to be a horror film by any means, and is instead meant to be thought-provoking. Of course, one thought the film provokes is that of a society of alien creatures far more advanced than we are showing up out of the blue with no indication of what they want. That is certainly a frightening idea, and since the movie portrays this scenario in such a believable way, it's possible you may come away a little rattled. There's also the alien creatures themselves, who are hideous-looking tentacled beasts that I would certainly rank among the scariest extraterrestrials ever put to film. E.T. they are not, that's for sure.

Given the seemingly juxtaposing genres of Arrival, the movie can be somewhat difficult to categorize. On the one hand, it's a deep, thinking person's sci-fi film in the vein of Interstellar or Contact, with overarching themes of time and linguistics; while on the other, it's a film about a worldwide alien invasion by tentacled creatures that wouldn't seem out of place in Independence Day. So which is it? Psychological sci-fi drama or big time alien spectacle?

The movie definitely trends more toward a smaller, intellectual film than it does a blockbuster actioner. Although the trailers put some emphasis on the world-ending potential of the aliens' arrival, the bulk of the film is far more personal, and mostly revolves around the effect that deciphering the aliens' complex dual language has on Adams' master linguist, Louise Banks. The film is based upon the Nebula Award-winning novella Story of Your Life by Ted Chiang, which is not a horror story in the slightest.

So is Arrival scary? If the mere idea of aliens visiting Earth terrifies you beyond belief, then yes, I suppose you'll be frightened by Arrival. But the movie certainly isn't meant to be scary, and its main purpose instead is to get you thinking. Whether the thoughts it conjures terrify you or not is ultimately up to you.