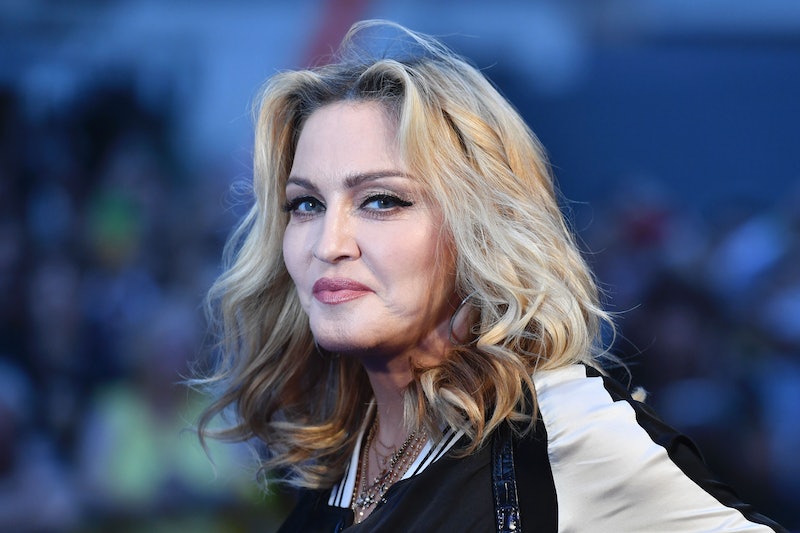 For many months Madonna has been vehemently spreading love for presidential candidate Hilary Clinton, and her support of the candidate has only increased over the past few days. On November 4, the reigning Queen of Pop shared a photo of herself performing with a vibrant "Hilary" written on the inside of her jacket. The caption of the photo read, "Bitches Are You In My Gang??? Doing a surprise intimate very small acoustic concert Monday night in support of Hillary. Stay tuned!" For the next few days, Madonna continued to share Hilary-centric images full of patriotic emojis and kind words about the Secretary of State.

This politically charged series caps off with a final post featuring Madonna wearing a black turtleneck, her blonde hair tucked under a red, white, and blue winter hat as she confidently throws up peace signs. The caption announced the location of Madonna's small concert, and reads "Meet me in Washington Square Park at 7:30 Let's Go Hard For Hillary Clinton!"

While Madonna is doing her thing in New York, the woman she's honoring is holding her own rally with the participation of potential "First Dude" Bill Clinton, the Obamas, and Bruce Springsteen at Independence hall in Philadelphia (where the Declaration of Independence was signed!). It's nice that Madonna gave thought to those New Yorkers who can't make it to Philly, but are still "with her" and want to get down with Clinton.

The rocking impromptu concert featured a Madonna who was seriously killing the acoustic guitar and folksy sound. After that inspiring display of Madonna-infused patriotism, I can't be the only person who wants Madonna to drop an Americana album. Can I?

Performance aside, it's inspiring that Madonna is taking her art a step further to make change she wishes to see. She's not using her power and pizazz for her own benefit, she's thinking about the whole country — and that is a beautiful thing. Whatever the election results, it's good to know that there are citizens out there who care about their home turfs and keeping love alive. Thanks Madonna, you da best.