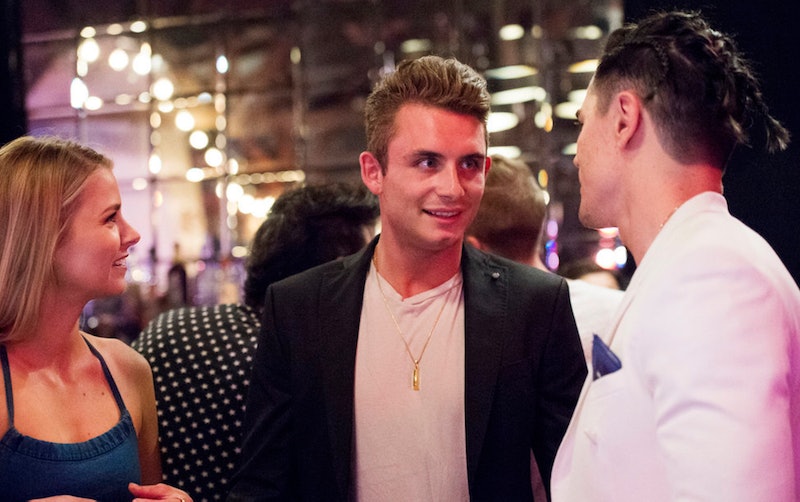 Whether it be a party crasher or a party brawler, a Vanderpump Rules season premiere just doesn't feel complete until some chaos breaks out at an invite-only event. Let the record show that Season 5 did not disappoint. At the beginning of the Pump Rules premiere, we learn that the dynamic of the group really has not changed since the the Season 4 reunion: Scheana, Stassi, Kristen, Katie, Tom Schwartz, Jax, and Brittany are on one team; Lala and James are on the opposing team; Tom Sandoval and Ariana are stuck in the middle. And on Monday's episode, the teams skip past the boring niceties and get right to butting heads at an OK! Magazine party (or, as Tom Sandoval calls it, SUR’s Christmas party). No warmup needed.

As Stassi, Kristen, Jax, Brittany, Scheana, Tom Schwartz, and Katie hang out at their reserved table at the OK! get-together, they are so happy to be in each other's company. They laugh and drink and joke and —

Wait, what’s that? A dist-SUR-bance in the force? Could it be James and Lala?

Yes. Yes, it could. Just as their coworkers settle in and get comfortable, Lala and James show up to the party and make a beeline for the other Pumpers' table. The other Pumpers are less than happy to see James and Lala. Within milliseconds, names are called, nose job jokes are made, and jabs about “summer bodies” are dished out. The other Pumpers tell James and Lala to go away, but James and Lala refuse to leave. And then, the final straw happens: James points at Katie and snidely asks if she is pregnant. This infuriates Scheana, moving her to stand up out of her seat and swat at James’s hand. She knocks his drink to the floor.

The glass shatters, Scheana yells, the rest of the group stares in silence. But James is not done: He picks up a bottle off of the Pumpers’ table, pours himself another drink, holds the cocktail in front of his crotch, and shakes the glass suggestively. Liquor splashes all over the floor and table. The other Pumpers watch in horror.

But before things can spiral out of control (i.e., before Jax can do anything that’ll impact his Sunglassesgate parole), the argument is broken up. Lala and James go to another table. And that is that. Another Pump Rules premiere fracas in the books.

Listen, I hate altercations/confrontation/loud noises as much as the next anxious person, but conflict at a party is basically Vanderpump Rules season premiere tradition at this point (see: James and Sandoval's Season 3 premiere quarrel; Shay and Schwartz's Season 2 premiere argument; Ariana's Season 4 premiere eye-daggers). The sweet, sweet din of Pumpers screaming over the sweet, sweet din of glassware exploding on a sticky bar floor is music to my Pump-loving ears. This season is already good as gold.