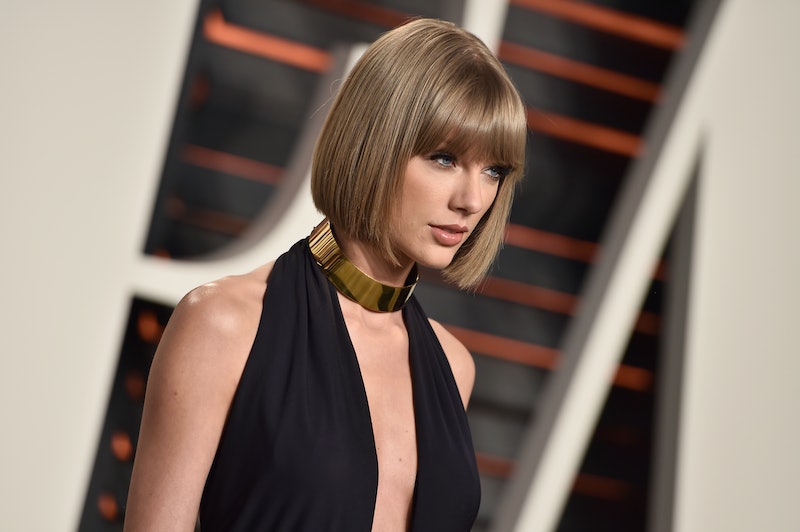 As election day rolls on, celebrity voting pictures are flooding social media, with dozens of the entertainment industry's biggest names either declaring that they're #withher or posting pictures with their "I voted" stickers. It's clear that no matter how rich or famous you are, the political process (and those great stickers) can still get you excited. Now, one notoriously politically silent pop star is joining in, though maybe not the way fans would hope. A new photo has many eager to know who Taylor Swift is voting for in 2016, but the answer remains a mystery.

On Tuesday morning, Swift posted a picture on her Instagram that showed her standing in line to vote — just like all us regular folks — and pointing to a sign that said, "vote entrance." The singer captioned her Instagram post, "Today is the day. Go out and VOTE." It's an important message, and one that many fans are relieved to see Swift delivering on a public platform.

But despite the photo and the many fans and publications wanting to know her political leanings, Swift hasn't declared who she's voting for yet, and it seems unlikely that she will. Even so, to some it's a surprise that Swift is making even this much of a political statement, as she typically remains silent on those issues.

Swift has always made it clear that she intends to put feminism at the forefront of her image, but she's been notoriously silent about the 2016 presidential election, to the consternation of those who believe that she, as a high-profile celebrity, has an obligation to speak out. In October, Fusion noted that she alluded to voting for Obama in a past Rolling Stone interview, and Swift was recently seen in an Instagram picture posted by one of her friends which had an #imwithher caption. Yet unlike many of her friends and peers, such as Lena Dunham, who has been leading a very active social media campaign and stumping for Clinton at many events, and Swift's ex-pal Katy Perry, who has been publicly #withher for many months now, Swift hasn't endorsed a candidate or said who she is voting for.

But even if she doesn't publicly announce her preference, Swift is encouraging everyone to go make the choice for themselves by voting, which is a hugely important message. In fact, the star has been passionate about voting for years. In 2012 during the presidential race between Obama and Romney, the singer talked to NPR about how she registered to vote on the day she turned 18 because she felt it was so important. Later in that interview, she also made it clear that he didn't think it was the right choice for her to publicly endorse a candidate or even reveal who she was voting for.

"I just feel like I don't have enough wisdom about myself as a person yet to go out there and say to 20 million followers on Twitter, and these people on Facebook, and whoever else is reading whatever interview I do, 'Vote for this person,'" Swift said. "I know who I'm going to vote for, but I don't think that it's important for me to say it, because it will influence people one way or another."

It looks like Swift is keeping to that belief in 2016 and sticking with a nonpartisan message that everyone can get behind.

More like this
Taylor Swift Fans Caught A Possible ‘1989’ Clue In Her Latest Awards Show Speech
By Grace Wehniainen
'The Summer I Turned Pretty' Using “Cruel Summer” Has Twitter Begging Taylor Swift To Release A Music Video
By Radhika Menon
Here’s How Lizzo Is Supporting Abortion Rights After The Roe v. Wade Reversal
By Brad Witter
Taylor Swift's “Carolina” Theme For 'Where The Crawdads Sing' Soundtrack Is Here
By Jake Viswanath
Get Even More From Bustle — Sign Up For The Newsletter