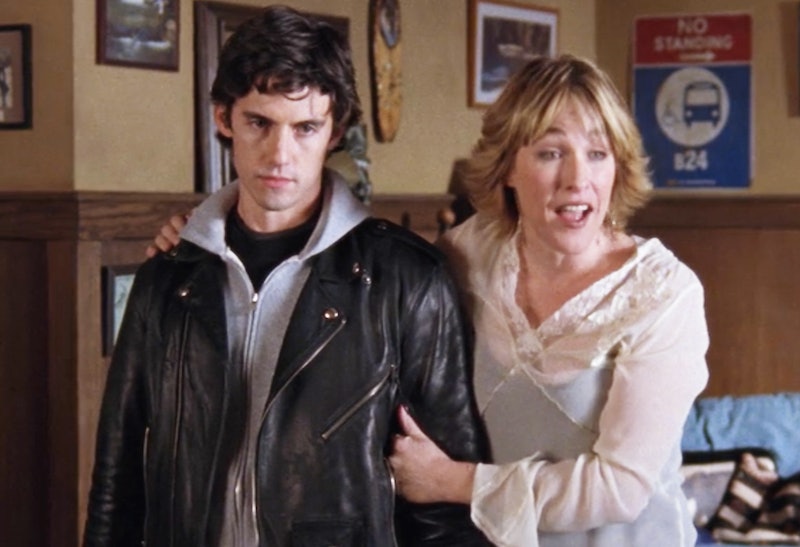 Let me just start by saying that I am 100 percent #TeamJess. While Dean made the perfect first boyfriend, and Logan was well... Logan, Jess related to Rory's reading habits, helped her first begin to explore her wild side without getting arrested, and never stood in the way of Rory and her dreams. Jess Mariano (played by actor Milo Ventimiglia) had just the right amount of bad boy and passion to leave us wanting more. However, though he stole our hearts, Jess also gave us moments where it was hard to be Team Jess. Lorelai often called Luke's nephew's motives into question, and so too have I had to question the city boy's judgement more than once.

Like any human being, Jess was by no means perfect. He's had doubts about himself, he feared falling in love, and he chased the crumbs of his broken family all the way to California. At times, it was hard to forgive the things he said and did to Rory — even if I was still able to eventually find my way back to Team Jess. Before tuning into the Netflix revival series, Gilmore Girls: A Year In The Life , here are some of Jess' worst moments. Unfortunately, we can't just overlook the past even as we root for this couple in the future.

Having two boys fighting over you might sound romantic, but Jess' jealously over Rory's relationship with Dean went too far. Even though he showed up at the Stars Hollow dance competition with a date, Jess refused take his eyes off Rory. This ended up being the last straw for Dean and Rory's relationship.

2. When Jess Is Rude To Lorelai

While Dean and Lorelai had a strong bond, Lorelai didn't like Jess from day one — and he certainly didn't help the situation. Jess' attitude toward most adults was astounding, but, given how important both Lorelai and Luke were to Rory, a little bit of effort to be polite on his part would've been nice.

3. When Jess Is Disrespectful To Emily Gilmore

Sure, it's hard for anyone to meet Emily Gilmore's expectations. However, when she set up a dinner to meet Rory's new boyfriend, Jess not only showed up late, but continued to disrespect both Emily and the occasion. It gave a bad first impression and caused a riff between him and Rory that wouldn't have existed if he'd just been honest about his black eye in the first place.

4. When Jess Lied To Rory About Skipping School

Jess hid the fact that he was skipping school from Luke, which is one thing, but hiding it from Rory was something else. Considering how school-obsessed Rory was, I can certainly sense the embarrassment that would come with telling her the truth. But lying to your girlfriend is never a good habit to fall into.

5. When Jess Cheats Rory Out Of Going To Prom

Jess dropping out of school is one thing, but not telling Rory that his grades were preventing him from purchasing prom tickets was an even bigger no-no.

6. When Jess Came On Too Strong At That Party

While it's clear that Jess would never do anything to hurt Rory, things did get scarily close to taking a dark turn when he tried to take their relationship to the next level without permission. That was enough to make this Team Jess fan question a lot of things about their relationship.

When life got tough for Jess, he escaped his problems by escaping Stars Hollow. He left no note for Rory, no message on the answering machine, not even a word for Luke to send Rory's way. This not only broke Rory's heart, but left her without closure.

8. When Jess Doesn't Say Anything Over The Phone

Jess' most aggravating moments had to be when he would call Rory and remain silent on the other end of the line. Even when he was making attempts to reach out, he always got cold feet when it came to actually speaking up.

9. When Jess Flees After Expressing His Love

After returning to repair his car, Jess avoids Rory before suddenly telling her he loves her. However, his announcement wasn't as romantic as it sounds. Jess literally fled Stars Hollow before Rory could even respond.

10. When Jess Expects Rory To Run Away With Him

During Rory's time at Yale, Jess briefly interrupted Rory's fling with Dean to try and win her back once again. Instead of saying he loved her, Jess proposed that Rory run away with him and lead a completely different life. In the middle of her college education. Yeah, OK.

11. When Jess Was Bad At Communicating With Rory

Rory would spend hours trying to distract herself as she waited for the phone to ring. In these moments, Jess was equivalent to every guy who has ever left us waiting for a text back.

12. When Jess Didn't Want To Join In On Stars Hollow Events

Whether it was a town festival, a high school dance, or even a movie night with Rory and her mom, Jess didn't show much interest in activities that didn't spark his interest. While watching Gilmore Girls, I often found myself trying to convince Jess to do something with Rory through the television. Is that too much to ask for?

Despite it all, I've still managed to remain a proud member of Team Jess. These faults actually don't outshine his positives, and sometimes love can make us do crazy things.