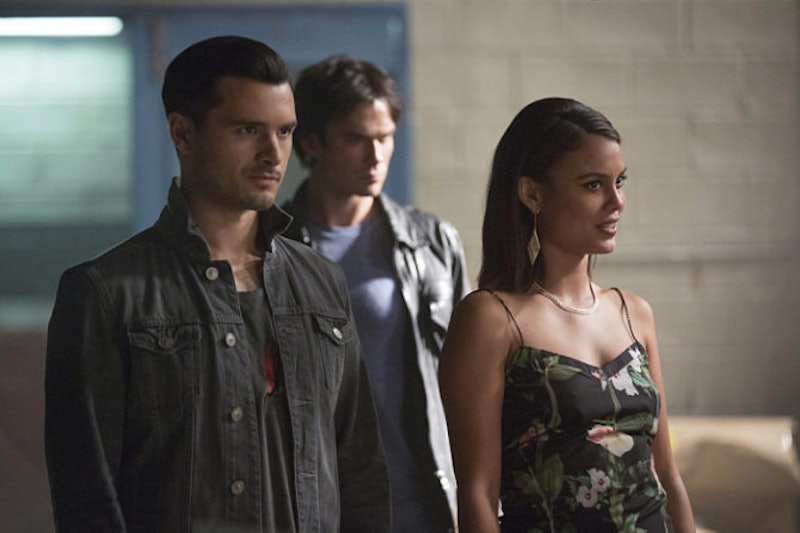 With The CW's The Vampire Diaries now in its final season, it's time to start anticipating a few things that might happen. One is that Elena (Nina Dobrev) will most likely make an appearance before the series comes to an end, and the other is that our flock of anti-heroes will probably be facing some kind of huge, big, bad villain before riding off into the supernatural sunset of reruns. But three episodes into Season 8, I'm finding myself underwhelmed by the supposed Big Bad, Sybil the siren. In my eyes, TVD has to do something huge, something totally out there, and bring in a villain that has way more umph — like the freakin' Devil.

The Vampire Diaries gang has faced many villains over the years, with some of the crew even having been villains themselves on occasion. There have been original vampires, werewolves, witches, demons, mad scientists, and ancient beings all spilling blood, taking lives, and making the lives of Elena, Stefan, Caroline, Bonnie, and Damon a bit harder. Back at Comic Con in July, the showrunners said, according to The Hollywood Reporter , that "the Season 8 villain is going to be the most formidable big bad of the series," calling it "the ultimate evil." Yet while that may have been the intention, I, for one, haven't been satisfied with the villainy and conflict brought upon by the siren.

As described in ancient texts, sirens were dangerous and beautiful (and yes, female) creatures who would lure sailors to their deaths through alluring songs. While they are creepy, mythological creatures, it just seems a little tame for a show as out there as TVD. A siren doesn't feel any more dangerous to me than a vampire, werewolf, or witch, even if she is an ancient creature, so it doesn't feel like the show is really upping the ante when it comes to its final villain. Plus, the whole siren thing falls a bit too much into the sexy, sultry villain-seducing-the-men-folk trope that TVD has used oodles of times in the past.

But what if Sybil isn't really the real deal Big Bad for the final season? The history of sirens, the ancient connections, and a lot of the plot points are pointing elsewhere, a place that's been referenced but not yet really talked about yet on TVD: Hell. And who runs Hell? The Devil. Sirens are connected to the underworld in Greek mythology. New character Georgie has told Alaric her near death experience story, believing that she has, in fact, been to Hell. And for all of the series' supernatural elements like magic, mystical beings, an other side, and ghosts, it's never tackled "big" topics like Heaven and Hell. God and the Devil. Why else would Sybil be ordering Damon and Enzo to kill "bad people" if not to send them to Hell? Remember when the other side collapsed and Katherine was dragged away by an unknown force. Where'd she go? And with all of these tiny pieces alluding to Hell, I'm wondering if and hoping that TVD's final villain is going to turn out to be the Devil him (or her) self.

Bringing the Devil, or Satan, or whatever you want to call it, into the series as the final Big Bad would be a really powerful and dramatic way to end the series. I get that the showrunners might not want to get too heavy into religion-based topics, but with all of the evil forces that have plagued our beloved characters over the years, a siren just seems like no match for them. It doesn't feel like the stakes are as high as they should be for a finale, even if Sybil keeps stealing away characters' memories. Plus, if it's too grand, the Devil doesn't even have to be played by a singular person; the show could present it as man, woman, and monster in various ways and through various actors. After so many seasons,The Vampire Diariesdeserves to go out with a bang. So bring in the Devil already.