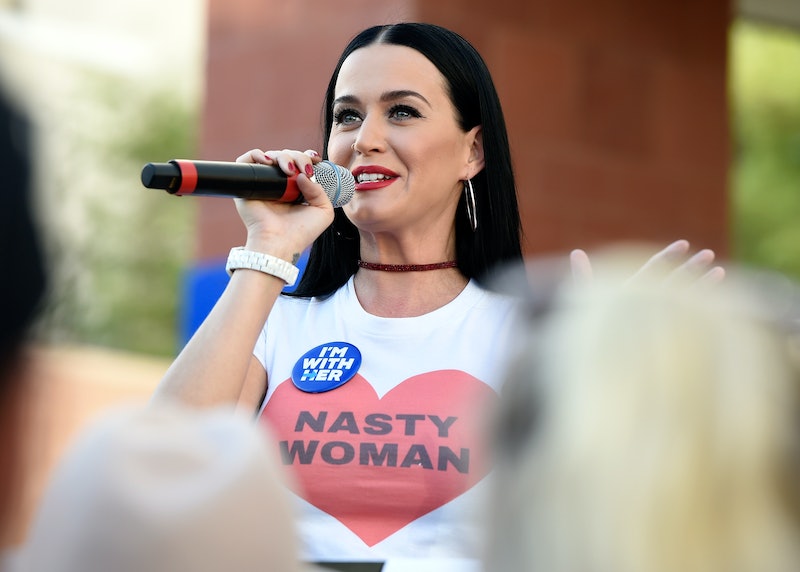 With this being one of the first elections where social media is a prominent force in reminding people to vote, celebrities are doting their best patriotic apparel to show their support. There have already been some outrageous voting outfits seen during Election Day like Lady Gaga's suffragette outfit, and even Katy Perry rocked some red, white, blue even though she voted early in October.

It's true that singer Katy Perry hasn't been a stranger to this year's election or some crazy patriotic outfits — especially when it comes to supporting Hillary Clinton for president. The star has been heavily supporting Hillary's campaign via social media, and she even performed at the Get-Out-the-Vote concert in Philadelphia on Nov. 5 and at the 2016 Democratic National Convention. While at the concert in Philly, Perry wore a blue cape-like coat that said, "I'm With Madame President," which has been one of many festive outfits Perry has worn in support of the #ImWithHer campaign.

Perry took part in early voting in October, but of course that didn't stop the star from wearing stars and stripes to support Hillary. Perry wore a white tee, jeans, a stars and stripes robe, and an American flag clutch to match.

Even though Perry voted early on her birthday on Oct. 25, she wished Hillary Clinton a happy early birthday by putting in her vote while also rocking the perfect voting robe at the same time!

On Election Day, Perry posted on Instagram showing when she voted early in October.

And because it might be a long night of watching to see the final results, you might have time to order a robe like Perry's to wear all week long.