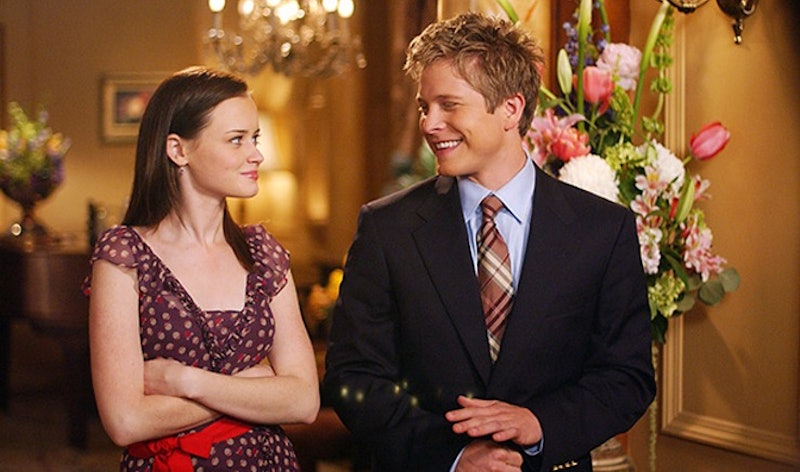 This may not be surprising, but it certainly gave me pause. Logan Huntzberger may not be in the final scene of the Gilmore Girls revival, and that could mean big things for his role in the new episodes. And by big things, I mean small things, because this news dispels a number of fan theories about how the series ends. If Logan isn’t there for the final four words, then he definitely isn’t one of the ones to say it. In other words, if this news is true, the final four words aren’t some loving exchange between Rory and Logan. Sorry, Team Logan, but Matthew Czurchy may have just dashed all of our hopes.

In a recent interview with Haute Living, Czurchy refused to discuss any details about the series or how it ends. But, in refusing to talk about it, he sort of gave away an important detail. When asked if he was happy with the ending, Czurchy said,

“I am not going to talk about the details of the ending right now. That is for Amy and Dan to talk about because it is their ending, not mine. I am very protective of Amy and Dan since they trusted me by sharing the last scene and last four words with me before the release of the series.”

He may not have meant to reveal any details, but he kind of did with that response. I mean, if they shared the final scene with him before the series released, then he likely wasn’t in the scene where the final four words are revealed, right?

That isn’t exactly delightful news for those of us who are Team Logan and have been hoping that his role in the revival is a significant one. I personally have been hoping that he does a lot more in the revival than simply wax nostalgic and look beautiful, and I’m not the only fan who hopes for the same thing. One fan theory that has been bandied about is that the final four words will somehow incorporate the wedding that is rumored to be happening in the revival. If that’s the case — and if Logan is not in the final scene — than the wedding definitely isn’t between Logan and Rory.

Sadly, it sounds like some of the show’s biggest players have been excluded from it, and, from the sound of it, Logan may be one of the unlucky ones. Sorry, Team Logan. If he isn’t in the final scene, it might just be because he isn’t Rory’s endgame.