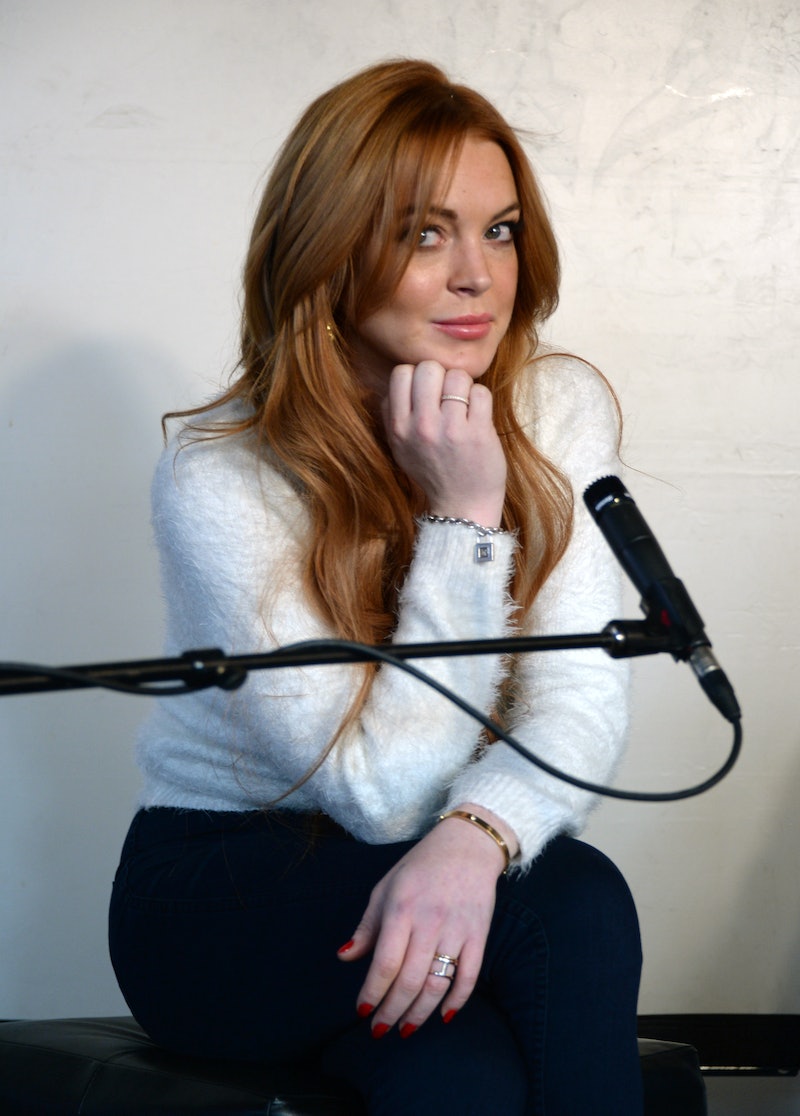 The Lindsay Lohan sex list has taken on a life of it's own since it's release on March 12. It reveals names slowly and seemingly at its own will. It drew a response from James Franco. This list really seems to exist separately from Lindsay Lohan because no one knows if she wrote it, if someone else wrote it, or if it came into existence by pure magic. But now that's changed because Lindsay Lohan spoke about the sex list when filming Monday's episode of Ellen. Lohan doesn't confirm or deny anything, but she acknowledges that the sex list exists, so feel free to assume that means "Omg! I knew she wrote it!" or "Lohan's just keeping it classy. The list is fake, but she's doesn't need to defend herself."

The list comes up during the Ellen interview when DeGeneres mentions one of Lohan's other appearances on the show, a 2004 episode where Lohan performed a song. DeGeneres plays a clip of the performance and afterward says, "I don't remember you actually ever singing? Did you sing longer than just on my show?" Lohan laughs it off and responds, "That's probably why I'm not singing right now." She goes on to say, "That was a really emotional song. It was like about my dad — no, I’d just broken up with someone." DeGeneres asks if she remembers who and Lohan replies, "Apparently there’s a list of many guys… It was Wilmer actually. It was Wilmer Valderrama."

The way this goes down — as you can see in the clip — seems a bit unnatural. Lohan kind of interrupts DeGeneres to bring up the fact that the song was emotional. Then, the way she interrupts herself when she realizes she wasn't upset about her dad but about the breakup seems almost like a forced way of getting to the point about the sex list.

Still, I want to give Lohan the benefit of the doubt and assume that I'm reading too much into this. (Seriously though, watch the clip. I can't be the only one who senses something odd.) It could be that this was pre-planned as part of the interview, but whether or not that's the case, it was a great way for Lohan to handle the situation. If she came right out and said it was fake, people would claim that meant it was real because she cared enough to deny it. On the other hand, if she said it was real... well, she would never say it was real. There's no point. By just dusting it off like it's nothing — again, this might have been specifically planned out by her PR person — it brings just the right amount of attention to it from Lohan that let's everyone go, "Hey. She made a statement about it and that's all we're getting from her." She just might need a little brush up on her acting skills.

More like this
20 Celebrity Couples Who You Forgot Dated In 2002
By Jake Viswanath
Spice Girls’ Net Worth: The Richest Member Is Wealthier Than The Rest Combined
By Hugh McIntyre
Harry Styles Addresses The Theory That His New Song "Daylight" Is About Taylor Swift
By Jake Viswanath
Joe Alwyn Reacts To Taylor Swift Earning An NYU Doctorate In A Rare Interview
By Jake Viswanath and Nicole Pomarico
Get Even More From Bustle — Sign Up For The Newsletter