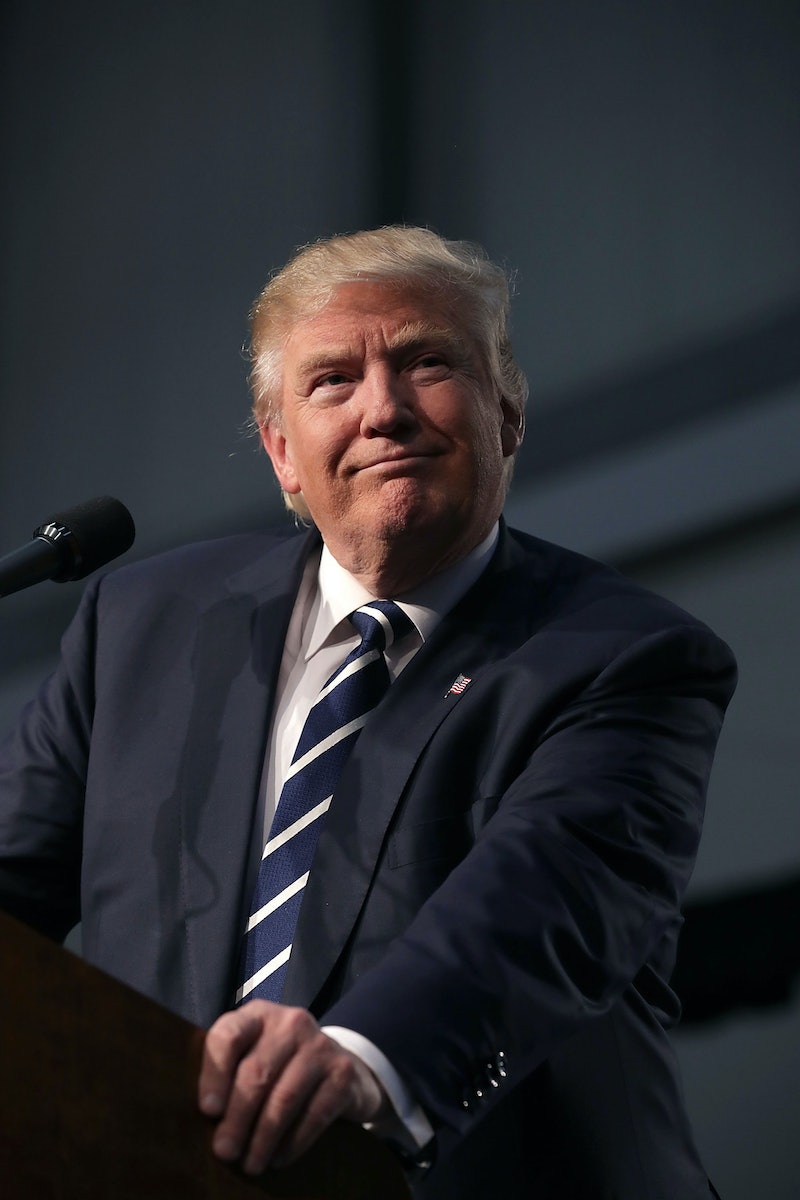 While the election results haven't been announced just yet, votes are leaning more toward Donald Trump than many people expected. Reactions on social media have ranged from shock to heartbreak to disbelief. One of the most poignant responses to Trump's success comes from a Twitter user. Referencing the sexual assault allegations against Trump, @Paxmee wrote, "Tell me again how rape and sexual assault accusations will ruin a man's career." These words call into question what Trump's campaign says about our country's support of sexual assault survivors, as well as what we're teaching the younger generation. In other words, what America's children are learning from all of this.

To say the least, that tweet is a gut punch. Whether Trump is ultimately elected or not, the results thus far show that he is a candidate that's taken seriously. That means millions of people are supporting a man, who was recorded on tape saying he helps himself to women's bodies. In a 2005 clip, Trump stated, "I just start kissing them, it's like a magnet. Just kiss. I don't even wait. And when you're a star they let you do it, you can do anything ... Grab them by the p*ssy. You can do anything." That language is not OK. Not only that, but what kind of message does that send to America's youth about consent? An absolutely awful one.

By letting this man make it this far in the election, in many ways, it silences the voices of his accusers, as well as any other women and men with stories of sexual assault. On top of that, it teaches kids that such traumatic things can be brushed under the rug if you're a powerful man. And that even if someone is accused of sexual assault — arguably one of the worst crimes of all — they can still garner tons of votes across the country.

The message is disheartening, to say the least. Making the situation more upsetting, the Twitter user who posted the initial tweet wrote a follow-up, likely from the onslaught of negativity received in response.

Yes, it goes without saying that anyone is innocent until proven guilty. But at the same time, that doesn't mean the voices of potential victims should be dismissed. Even setting Trump's alleged actions aside, it's unfathomable that someone who's said such offensive things about women has made it this far. How is it possible that saying you want to "grab women by the p*ssy" isn't enough to put a damper on your career? How can someone who says such degrading things run an entire country?

Little kids are watching the election, and it impacts their futures just as much — if not more. While I'm at a loss about what's going on right now, there's one thing that's for sure: This definitely is not the right message to send to such an impressionable audience.

More like this
Romance Authors Are Mobilizing For Reproductive Rights
By Natalia Perez-Gonzalez
Buckingham Palace Shuts Down Rumour About King Charles III's Coronation
By Sophie McEvoy and Sam Ramsden
New Coins Unveiled As King Charles III's Reign Gets Underway
By Sam Ramsden
The 'Love Is Blind' Season 3 Trailer Teases A Possible Fiancée Swap
By Kadin Burnett, Grace Wehniainen and Gabrielle Bondi
Get Even More From Bustle — Sign Up For The Newsletter