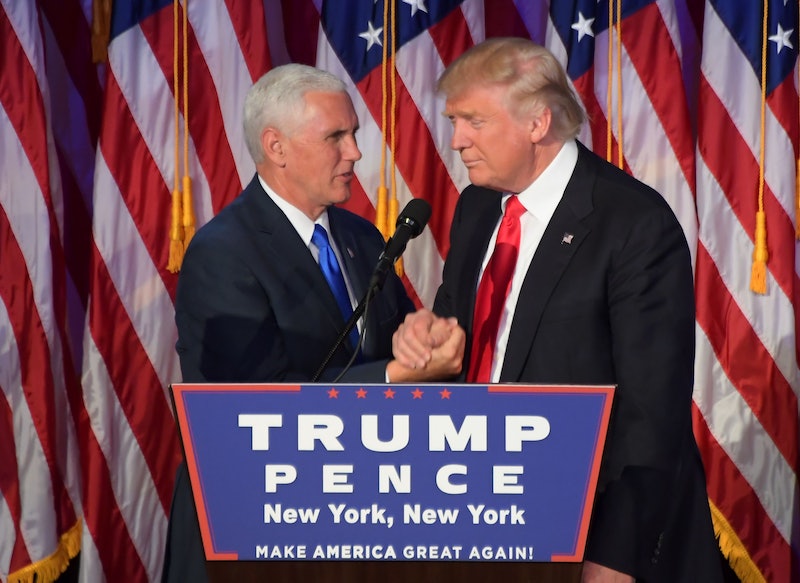 While you may still be reeling from the 2016 election results, facts are facts: Donald Trump is the president-elect. So what would a timeline of Trump's future presidency look like? It's hard to know exactly, since his greatest strength is making big promises, while simultaneously being vague on concrete details. But here's what I've uncovered so far: To start, unlike in other countries' presidential elections, Trump won't assume his place in the White House immediately. Instead, the incumbent president Barack Obama will stay in the White House for a few more months in order to give Trump some time to construct his cabinet.

Given the broad swaths of changes that Trump has promised to put in place — from an aggressively pro-life platform that means he could limit women's access to affordable birth control to deporting illegal immigrants — knowledge is power. And the more you know about his plans, the more prepared you'll be and the more advantage you can take of these last few months prior to Trump's inauguration. So if you're feeling in any way threatened by the prospect of Trump as president, I urge you to make every last minute count. It's still not too late to protect yourself from future policies that could affect you.

The president-elect is set to appear in court. According to Politico, "Trump University class-action lawsuit (is) set to begin jury selection" with "Trump called as a witness by both sides and certain to face sharp questioning about his venture’s marketing practices." It's particularly enjoyable for Trump's detractors since the judge on the case will be U.S. District Court Judge Gonzalo Curiel, a man whom Trump has referred to as "Mexican" and "Spanish" and who was born in Indiana. He's also a man who, Trump has argued, is biased against him, thanks to his Latin-American heritage.

January 2017: Trump Will Choose His Cabinet

According to Inquistr, Trump will start confirming the members of his cabinet in January, prior to officially assuming the mantle of president.

This will be Trump's first day in office as the official POTUS. According to the Evening Standard, "After the ceremony, Trump and vice president Mike Pence will attend a lunch held by Congress, before a parade down Pennsylvania Avenue to the White House." He will also attend a series of inaugural balls that day.

According to Mother Jones, Trump will enjoy a singularly busy first day in office, based on everything he and his running mate Mike Pence have committed to achieving in their first 24 hours in the White House. He's committed to, in his first hour, "begin swiftly removing criminal illegal immigrants from this country" before moving on to "repeal every single Obama executive order," "end the war on coal," "begin working on an impenetrable, physical, tall, powerful, beautiful, southern border wall," "meet with Homeland Security officials and generals to begin securing the southern border," "convene his top generals and inform them they have 30 days to come up with a plan to stop ISIS" and well, many, many more things. Check out Mother Jones for the full list.

Perhaps most importantly for female readers, however, are Trump's first day plans to repeal the Affordable Care Act (also known as Obamacare) on the first day of his administration. This is the act that mean birth control pills are free. If you're concerned about your ability to pay for birth control without the act, I urge you to consider getting a IUD (Intrauterine Device) installed as soon as possible. The costs of this is covered by many insurance companies and it protects women against an unwanted pregnancy for at least five years.

When the Republican Party blocked Obama's attempts in February to appoint federal judge Merrick Garland to the Supreme Court following the death of Antonin Scalia, they left a place free. It looks like their bet will pay off: Trump will nominate a new Supreme Court justice in January, following his inauguration.

Fortune predicts it will take Trump at least a year to dismantle the Clean Power Plan, Obama's environmental legacy, which attempted to reduce carbon emissions via pollution regulation.

2021: Trump Could Pull The United States Out Of The Paris Climate Change Deal

According to Vox, this will be the earliest Trump could pull the United States out of the Paris Climate Change Deal. This isn't unlikely — Trump has previously called climate change a "hoax." However, as the site also acknowledges, he could also hinder any environmental process by ignoring the deal during its first four years.

Since a U.S. presidential term lasts for four years, this is the earliest Trump would leave the White House. However, since U.S. presidents can serve for two terms, there very well could be a 2025 exit date for Donald Trump.

Still, given Trump's habit of getting embroiled in legal cases, I wouldn't necessarily rule out impeachment or jail time. Malcolm Gladwell hasn't.