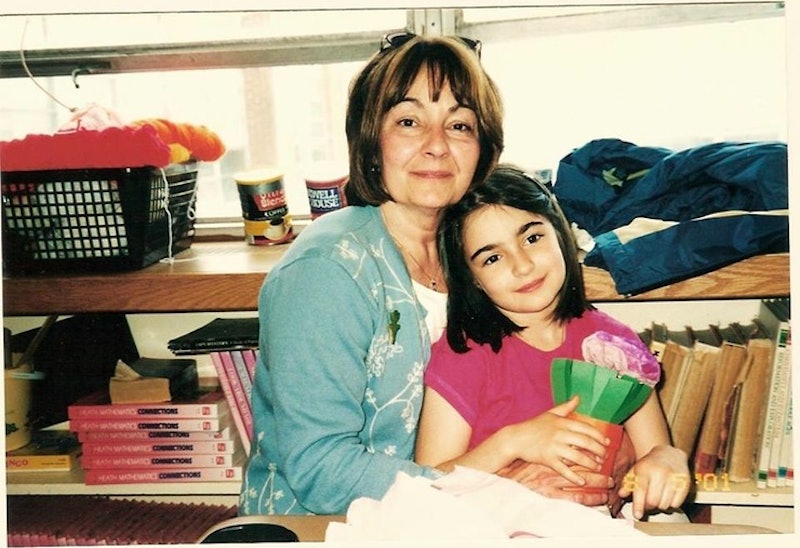 My mom and I rarely agree on anything, so why would our opinions about the most controversial presidential election in U.S. history be any different? My mom is a staunch Trump supporter, and has been since the very beginning. Meanwhile, I am a former Bernie Babe who recognizes the futility and privilege of protest voting, so whether I like it or not, #ImWithHer. (Or #IWasWithHer, I guess.)

I went to bed on Election Night seriously questioning our country’s stability, and woke up to some truly terrifying political news: “The Donald” J. Trump is our President-elect. Say what you will about Hillary and her ties to Wall Street (and her damn emails), but in my opinion, anyone would have been a better presidential choice than a man I believe is charlatan, con artist, and bigot.

My mood was awful when I staggered into the kitchen Wednesday morning, exhausted from not only Election Night, but the toll this entire election cycle has taken on my emotions. I made my eggs and poured my coffee with a heavy heart. My mom, on the other hand, prepared her oatmeal with a spring in her step and a smile on her face.

Normally, we snap at each other over stupid things, like how to properly load the dishwasher, and how to leave me alone about properly loading the dishwasher. But our conversations about this presidential race turned ugly pretty quickly.

My mom isn’t particularly politically active, but that doesn’t stop her from thinking she’s a great armchair pundit. If asked, she would probably compare herself to Megyn Kelly, but I’d have to say she’s more like Ann Coulter. She is weirdly, deeply conservative. Bill O’Reilly and Sean Hannity are to her what Harry Styles and Zayn Malik are to preteen girls. Fox News is always playing in the background in the living room while my mom plays Candy Crush and reads, I dunno, Breitbart, until I come home and try to change the channel. My mom once looked me dead in the eye and earnestly told me that network was known as being “fair and balanced.” I could barely keep from laughing in her face.

This particular election season, more than any other, has brought out the worst in the both of us. Normally, we snap at each other over stupid things, like how to properly load the dishwasher, and how to leave me alone about properly loading the dishwasher. But our conversations about this presidential race turned ugly pretty quickly.

She seized every opportunity to casually insert her fondness for Trump into any conversation, and did an incredibly bad acting job at feigning shock when I told her I was voting for Hillary. I have a “Feel The Bern” sticker on my bedroom door, for crying out loud. Did she really think I was voting for Trump?

“Oh are you?” She would ask, giving a fake little gasp. “Why? Why ever are you voting for Crooked Hillary?”

What is your deal? I wanted to ask her. I might not be crazy about Hillary Clinton as my candidate, but at least she’s not an orange-tinted maniac like Trump.

“That’s the thing — I really don’t care,” she said, raising her eyebrows and shrugging her shoulders, a mannerism that I recognize I've inherited from her. "It's just politician talk. After all, people say things all the time that they don’t really mean."

During dinner a few weeks ago, after one of my mom’s verbal digs, I finally lost it and snapped at her. “You know that the main reason Trump is so popular is that he appeals to uneducated white people like you and Dad who are too stupid and ignorant to know any better.”

“Well, these, ‘uneducated, ignorant white people’ were the ones who sent you to college,” she said, visibly upset. She left the room.

I hated myself for upsetting her, but I was still frustrated. What is it with you and men? I keep wanting to ask her. How can a savvy, strong woman like my mom, who has gone through so much in her life, not be excited about the prospect of shattering the ultimate glass ceiling once and for all?

Emotions were running fairly hot at my house on Election Night. Against my better judgement, I tried to have a frank conversation with her about her political stance. “Doesn’t it bother you,” I asked, “that Trump is an awful misogynist who says terrible things about women? That a dozen women have come forward about possible assault allegations? That this guy literally brags and laughs about grabbing women’s genitals? How is any of this OK with you, as both a woman and a human being?”

“That’s the thing — I really don’t care,” she said, raising her eyebrows and shrugging her shoulders, a mannerism that I recognize I've inherited from her. "It's just politician talk. After all, people say things all the time that they don’t really mean."

I wanted to scream. The same two-faced qualities that she condemns in Hillary are the exact same hall passes she gladly writes for Trump and his rape culture excuses. But after 24 years and nine months of knowing her, I know you can’t argue with my mom. Calling attention to her logical fallacy would just be met with sneers about my being “too educated.”

“This is a perfect example of a qualified, proficient woman competing against a man with absolutely no experience for the same job, and potentially losing,” I said to my mom. “Can’t you see how frustrating that is for a young woman like me to see?”

"I never thought of it like that," she conceded. On TV, Clinton was falling behind in the polls. My stomach clenched. Is this really happening?

I tried to focus my attention on my mom, but my eyes kept flicking nervously to the news. “I just want to know, woman-to-woman, what appeals to you about Trump. Tell me one positive thing about him that has nothing to do about how awful Hillary Clinton is.”

With total sincerity, she answered: “He’s unique. He’s not like everybody else. He’s not a ‘good ol’ boy.’”

“Look, I’m not crazy about Hillary, but she’s incredibly accomplished and I feel that she can get the job done,” I said. “I just feel that Trump stands in direct contrast with every social, political, and economic point of view that I have. I’d rather have four more years of the same thing, both good and bad, than the horrifying unknown with Trump.” Seeing my attempt to meet her in the middle, my mom tried to do the same.

“Everybody is tired of the same old bullshit. I want change when it comes to what’s going on in this world. In my 60-plus years, nothing has really changed, and I want to see the world turn into a better place. I think we both want the same thing, and both of our candidates are trying to get us there in the way they know how.”

People like my mom are the reason that Trump was able to secure the presidency. Trump is so appealing to voters like her because he’s an outsider who isn’t a politician beholden to anybody. He’s not part of the political dynasty like the “terrible Clinton machine.” But the truth is, working-class Americans like her and my dad rely on conservative fear-mongering, nativism, and ethno-nationalism to instill a sense of security in an increasingly diverse and shifting socio-political landscape, one which looks a lot different than the Irish- and Italian-American urban communities they grew up in. To them, the picture that Trump paints of today's America is scary. After all, fear is way more marketable than hope, and Trump is nothing if not a seasoned businessman.

Yet I don’t believe my mom voted for Trump to be malicious, racist, or xenophobic. She is a beautiful, resilient woman who wants to see that our country is a great place for me to become an adult in. I do think, however, that she is misguided and needs to consume media other than Fox News.

Politics will continue to be a touchy subject in our house for the next few months. I know I can’t talk to my mom without getting angry and calling her ignorant, because this is a subject we will never see eye-to-eye on. As the Trump presidency plays out over the next four years, I know the debates, fights, and arguments will continue at my house. Every time Trump does something monumental, my mom will nod in agreement and rub my nose in it. Every time he incites hatred and violence, I'll let her know how disgusted I am that people like her elected him president.

I'd like to tell you we'll find a way to meet in the middle. My plan was to continue living at home for the next few months while I look for a better job and search for roommates. But the truth is, much like America, now I'm not so sure if my divided house can still stand.