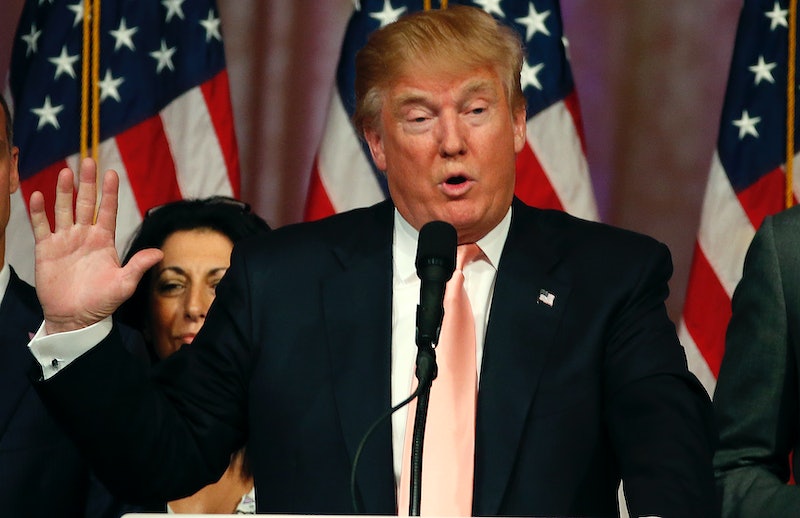 Hang on to your solar panels, friends. Donald Trump's presidency could mean big things for climate change. And those big things aren’t necessarily good ones. In a tweet, BuzzFeed reporter Mary Georgantopoulos shared that she spoke to a protester who believes Trump’s effect on climate change could be long-lasting. But could climate change be the most damaging facet of this presidency? If he tows the hard line that he’s been letting out about climate change all along the campaign trail, it just might be.

So let’s go over the facts, shall we? Even though Trump has been pretty evasive when it comes to laying out any real plans for how he plans on running his term in office, he has made enough comments on the campaign trail to terrify just about anyone who believes that the environment should be America’s priority.

To begin with, Trump simply doesn’t believe in climate change. He may deny it now, but he did in fact say that it is a hoax, perpetrated by the Chinese. (There's a tweet to prove it.) With that level of disbelief running throughout his presidency, paying any real attention to environmental issues is probably not at the top of his list.

But it’s Trump’s threats about what he plans on doing once he’s in office that have people the most concerned. Not only did he say that he plans on using a man who does not believe in global warming to head his EPA transition team, he’s talked about getting rid of the same regulations that President Obama worked tirelessly to put in place to limit carbon emissions. In addition, the president-elect has hinted in the past that may want to get rid of the EPA entirely. But maybe the most terrifying plan of all is that Trump has said he plans on saving the country billions by repealing federal spending on clean energy. These plans, he says, would save our country billions. But saving our country money may come at the cost of our world.

So will climate change be the thing takes the biggest step back under a Trump presidency? From the sounds of the promises he’s made on the campaign trail, it very well could be.