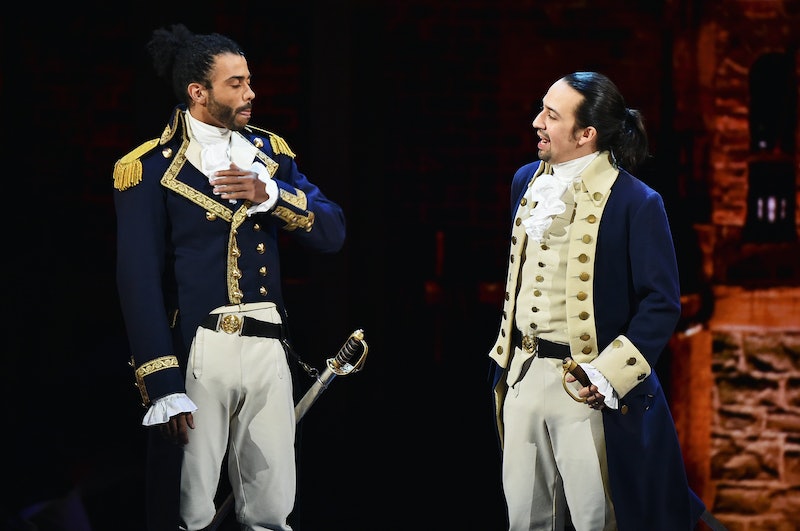 Lin Manuel Miranda's Twitter has been a beacon of positivity during the days following the U.S. election, and the the upcoming Hamilton Mixtape has provided worried citizens with something to look forward to. However, his Twitter on Thursday morning might leave U.S. supporters wondering where they can listen to "Immigrants," a Hamilton Mixtape track that some people have already gotten their hands on.

Miranda promised early Thursday morning that "Immigrants" and "Satisfied" would drop at "midnight tonight, wherever you are." Like any midnight release, this has led to some confusion among fans, especially now that some people are tweeting out lyrics to tracks others can't find anywhere. While the new tracks aren't yet available in the United States, they have been released in places that already had their "midnight tonight" after Miranda's announcement — like Australia. The song lengths have already tantalizingly appeared on iTunes in the US, where the song will soon be available to purchase, whenever midnight happens to be for you.

While a lot of fans are freaking out about Sia's rendition of "Satisfied" (which features Miguel and Queen Latifah), "Immigrants (We Get The Job Done)" by K'Naan, Snow Tha Product, Riz MC, and Residente is the subject of special anticipation, as the name of the track is not featured on the original Hamilton soundtrack. However, the title will be familiar to those who closely follow Hamilton and Miranda. In "Yorktown (The World Turned Upside Down)" Lafayette and Hamilton rap those words, and, at the University of Pennsylvania's commencement address, Miranda indirectly called out Donald Trump and elaborated on how Hamilton's story is a testament to the power of immigrants:

“In a year when politicians traffic in anti-immigrant rhetoric, there is also a Broadway musical reminding us that a broke, orphan immigrant from the West Indies built our financial system, a story that reminds us that since the beginning of the great, unfinished symphony that is our American experiment, time and time again, immigrants get the job done.”

It's an important and highly timely message, so "Immigrants" is bound to be powerful. Apparently, out of all the verses on the mixtape, Miranda's dad is a personal fan of Residente's "Immigrants" verse. But it has stiff competition; the mixtape also features renditions of "That Would Be Enough" by Alicia Keys, "Dear Theodosia" by Regina Spektor, and John Legend on "History Has Its Eyes On You."

The Hamilton Mixtape will be released on iTunes on December 2, but it's available for pre-order now. iTunes definitely seems like the best bet for downloading the early release tracks, but it's very possible the overall mixtape will be available on streaming services like Spotify. We can hardly wait.

More like this
Beyoncé Is The First Woman To Have A No. 1 Album Since Adele Did Almost A Year Ago
By Radhika Menon
The Lionesses Are Calling For Equal Access To Football In Schools
By Sophie McEvoy
Charlene White & MPs Lead Tributes For Bristol Bus Boycott Organiser Roy Hackett
By Sam Ramsden
'The Capture' Is Finally Back – & S2 Looks Tense AF
By Sophie McEvoy and El Hunt
Get Even More From Bustle — Sign Up For The Newsletter