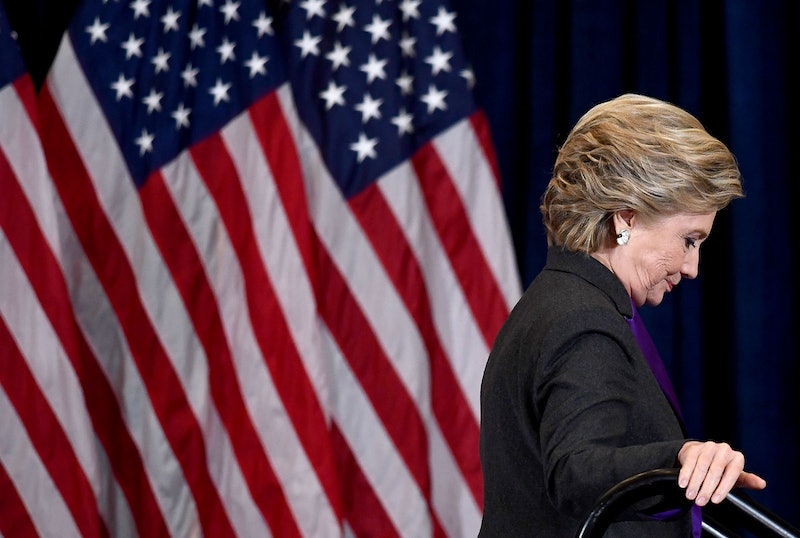 Now that Donald Trump has been elected president in a shocking surprise victory, numerous petitions to change the electoral college have begun circulating online. To the consternation of many Americans, Trump became the president-elect despite losing the popular vote to Hillary Clinton by a slim but significant margin — one that has held up as the final votes are being counted. The situation is reminiscent of the controversial 2000 presidential race between George W. Bush and Al Gore, in which Gore won the popular vote but Bush was elected president. Currently, according to NPR, Clinton has received 228 electoral votes, while Trump has won 279.

So how is it that Clinton won the popular vote but not the presidency? It's all thanks to the American electoral college system: Before the election, each political party chooses electors to represent them. When voters choose a presidential candidate, they're also selecting the corresponding elector, who votes accordingly in December. In most of the country, it's a winner-takes-all system; whoever wins a state's popular vote is awarded all the electoral votes for that state. The catch is that these votes are based on a state's number of senators and house representatives, so they vary from state to state. It's more important to win states with a high proportion of electoral votes — like Trump taking Wisconsin and Florida — than to receive the most votes overall.

Trump's astonishing victory has reawakened criticism of the electoral college system, which has been criticized for decades. David Boise, a lawyer who represented Gore in Bush v. Gore in 2000, told the New York Times that he considers the electoral college a "historical anomaly," and his concerns have been echoed by others online.

If you've found yourself nodding along so far, there are several petitions to change the electoral college system online. Here are five petitions to get you started, plus a few honorable mentions.

This Change.org petition asking Congress to get rid of the electoral system has received more than 45,000 signatures.

On MoveOn.org, the creator of this petition writes, "It is time we elect the President of the United States by Popular Vote. Let us end the electoral college and finally have presidents that are truly elected by the people."

Despite its name, this is actually a different petition than the first, and it's amassed more than 62,000 signatures. The petition can be found at MoveOn.org.

Found on Petitionsite.org, this petition is still picking up steam.

Finally, I would be remiss not to note two other petitions quickly accumulating support online: The Change.org petition asking electors to vote for Clinton despite the outcome of the election, and my personal favorite, the petition asking NASA to launch Trump into space, where he'll hopefully wreak less havoc than he did on Earth. A girl can dream, right?

More like this
The 7 Best White Face Paints For Halloween In 2022
By Maria Cassano
Here’s What It Means If You See 222 All The Time
By Nina Kahn
The Spiritual Meaning Of Angel Number 444, Explained
By Nina Kahn and Kristine Fellizar
15 Halloween Costumes Inspired By TikTok Trends
By Emma Carey
Get Even More From Bustle — Sign Up For The Newsletter