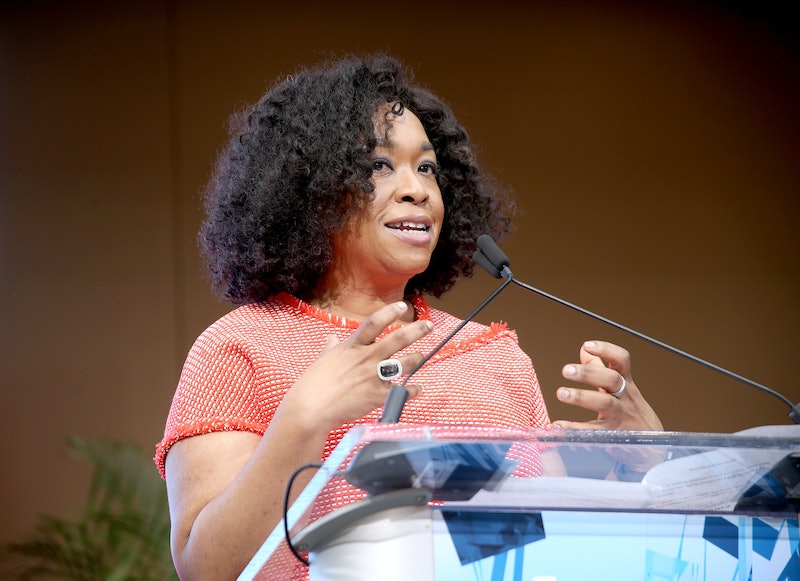 It goes without saying that Shonda Rhimes is an influential woman. Her shows — Grey's Anatomy, Scandal, and How To Get Away With Murder — have been so well-received by the public that she has her own television block on ABC known as ShondaLand Thursdays. She is the face of the ShondaLand production company, and has reached a level of success that many women of color aspiring to work behind the camera can only dream of. But, when I spoke to her recent causes, the writer and producer had a powerful message for women that has become even more resonant in the days since Donald Trump became president-elect of the United States. "Every single person has a story," says Rhimes. "Every single person has an accomplishment. And, even if there’s no [grant] waiting for you, you still have the opportunity to be an overachiever."

As anyone who follows her on Twitter knows, the writer and producer often uses her platform to speak about causes that are close to her heart. One such cause is inspiring people to change the world, as Rhimes is supporting a grant that is actually giving them the means to do so. "[The grant] is a way to really celebrate people who are working really hard, but [are] also taking the time out to give back to their communities," she says. "I think that we spend a lot of time celebrating celebrities, but we don’t spend a lot of time celebrating the people who should be celebrated, which are the ones who are actually working to make real change."

Although the interview was conducted prior to the results of the presidential race, Rhimes' words become even more of an inspiration in the aftermath. Trump's election came despite the fact that he has advocated treating women like objects — which made it clear that we are living in a country that not only doesn't respect women but also has an overwhelming amount of internalized sexism. (According to The New York Times, 53 percent of white women voted for Trump.) This has led to more than a little disillusion and helplessness among non-Trump supporters, and that's understandable. But that doesn't need to be the end. As Rhimes says, every single person has a story and every single person has the opportunity to be an overachiever. To make real change. To make a difference.

Making a difference can be hard, if not nearly impossible — especially in today's political climate. But Rhimes has advice for women who aspire to achieve her level of success, and it's the kind of advice that can apply to most anything that a person might want to accomplish.

Rhimes' words are the motivating movement we need to never give up on ourselves or on the world in which we live. They should also be the call to action that we need to be the change that we wish to see in the world, because she is doing her part to make it easier for us to get things done. "I love the fact that we’re trying to find a way to reward people — not the people you see on television, not people who are famous, but real people who are doing something special," she says. "It’s a really great way for me to feel like I can help give back, and it’s really wonderful to encourage other people."

And isn't that the most important thing that we can focus on post-election? Supporting and encouraging one another to make this world a better place? In fact, Rhimes says that's one thing that she wishes she had more access to when she was younger. "There are so many amazing programs that are really just about women getting to know women and women getting to help women," she says. "I always call them the new Girls Club, in the way that old Boys Clubs used to exist, that I wish had existed when things started. I think that would have really helped me have the confidence and the courage to get out there and do things that it took me much longer to do."

We are living in a time with these programs, with this support, and with a grant that not only encourages us to succeed, but also dares us to. Now, all we need is that confidence and courage, which Rhimes' message can hopefully help to provide.