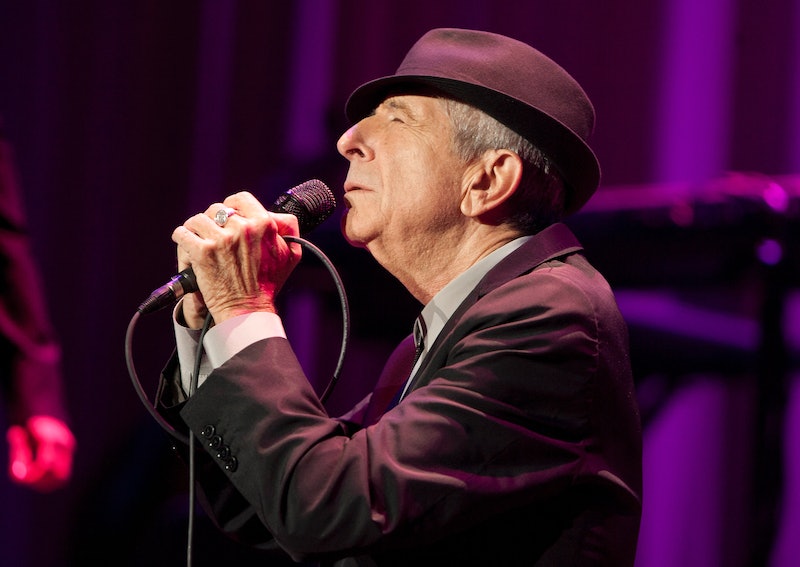 Back in 1984, Leonard Cohen's career seemingly hit a rough patch. After a hiatus from the limelight, label executives weren't looking forward to his new music. His previous albums in the '70s, Recent Songs and Death of a Ladies' Man, didn't have the best sales, according to a recollection from Rolling Stone. However, the label took a chance anyway and released Various Positions — which yes, included Cohen's iconic song "Hallelujah." When news broke on Thursday, Nov. 11 that Cohen passed away at age 82, this song instantly came to mind. This track may not have been an immediate hit, but since the late '80s, the song has been covered on a massive scale, and as you can imagine, the most iconic "Hallelujah" performances range in every way imaginable.

Sure, it took bit of time for "Hallelujah" to hit it big. But eventually, it secured its spot as not only a classic, but a classic that is insanely popular to cover. Bob Dylan played "Hallelujah" during some of his shows in '88. In 1991, The Velvet Underground took on the track. It wasn't until 1994 when Jeff Buckley released his version that it really took off, according to Rolling Stone. In fact, the song even inspired an entire book by Alan Light called The Holy or the Broken: Leonard Cohen, Jeff Buckley & the Unlikely Ascent of "Hallelujah." Oh, and you can't forget the song's appearance in Shrek in 2001.

Even though he's rarely attached to the version you hear — given there are so many out there — "Hallelujah" was arguably Cohen's most famous track. Take a look at some of the song's best versions.

Spektor performed her version live at the Jewish Heritage Festival when she was only 25. Her voice seems to find that vulnerability and idleness that so perfectly mimics the themes in the song.

Lang’s performance at the 2010 Vancouver Olympics was one to remember.

To die-hard Cohen fans this might feel sacrilegious, but the Wainwright version — also known as the one from Shrek — was another driving force behind the song's popularity. It appeared on the soundtrack. However, in the movie itself, they used John Cale's version. (See below.)

The specificity of Cale's voice lent something wholly unique.

During a Montreal show in 1988, Dylan honored Cohen's original song, but with his own twist.

Buckley’s recording was the undisputed highlight of 1994’s Grace. The exhale in the beginning and closing moments make the version truly his own, and it's easy to see why the re-imagining made the song soar in popularity.

Of course one of the most legendary versions has to come from the man himself. Taken from Cohen's 2010 album Songs from the Road, which is a collection of 12 tunes from his 2008 and 2009 concert dates, this live cover encompasses the artist's vocal skills.

Cohen's legacy — "Hallelujah" and beyond — will be massively influential for years to come.