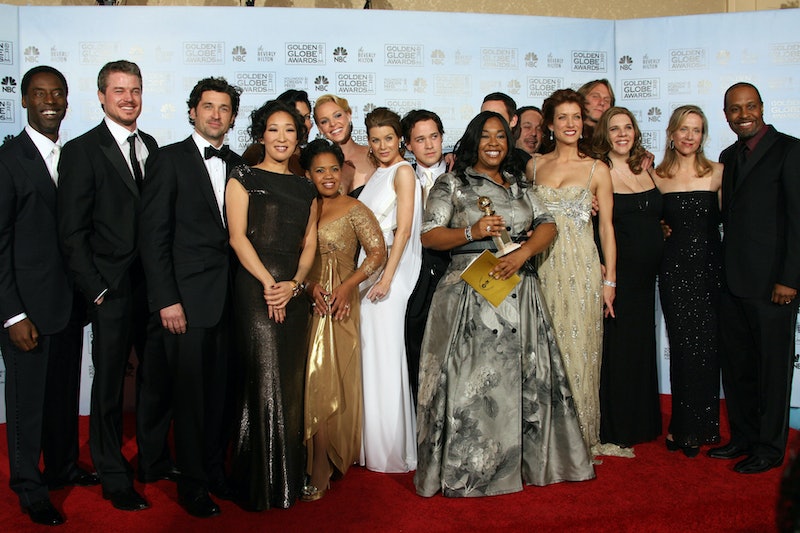 It's been so long since beloved Shondaland character Derek Shepherd died in a car accident. But, on Thursday, Derek returned to Grey's Anatomy , kinda, in a scene with a thoughtful Meredith Grey. Patrick Dempsey didn't actually film anything for the scene. According to Hollywood Life, it was done with CGI, superimposing old footage along with current Meredith. The outlet reports that "The Derek 'moment' was pulled from Season 2 Episode 8 titled 'Let It Be,' during which Meredith thought she lost Derek to Addison." It was fitted into this season when Meredith was remembering how Derek died in a car accident and was taken from her far too soon.

The moment was only a few seconds, but that Derek smile melted everyone and reminded us how empty the show is without his presence. I mean, Meredith and co. do a great job at the hospital, and it's still fun to tune in, but I will forever miss Derek. His and Meredith's romance was one for the TV ages.

It's kind of nice that even though Derek is dead, that doesn't rule his character out from ever returning. Thanks to the magic of CGI, Dempsey doesn't even have to be on board to give fans a taste of McDreamy. I mean, yes, that's strange, but I'LL TAKE WHAT I CAN GET IN 2016, OK?

Obviously you can't have a Derek flashback (daydream?) without fans freaking out. They came out in full force on Thursday.

Same. Can we just all agree to go back to a time when Derek was alive and things were still good on this planet? Great.

More like this
'Grey's Anatomy's New Intern Got Advice From Dr. Bailey Herself
By Grace Wehniainen
This Episode 6 Moment Foreshadows Viserys' Fate On 'House Of The Dragon'
By Grace Wehniainen
Nicola Coughlan Shared A Lady Whistledown Excerpt From ‘Bridgerton’ Season 3
By Grace Wehniainen, Alyssa Lapid and Sam Ramsden
Everything To Know About 'The Last Of Us' TV Adaptation
By Sophie McEvoy and Radhika Menon
Get Even More From Bustle — Sign Up For The Newsletter