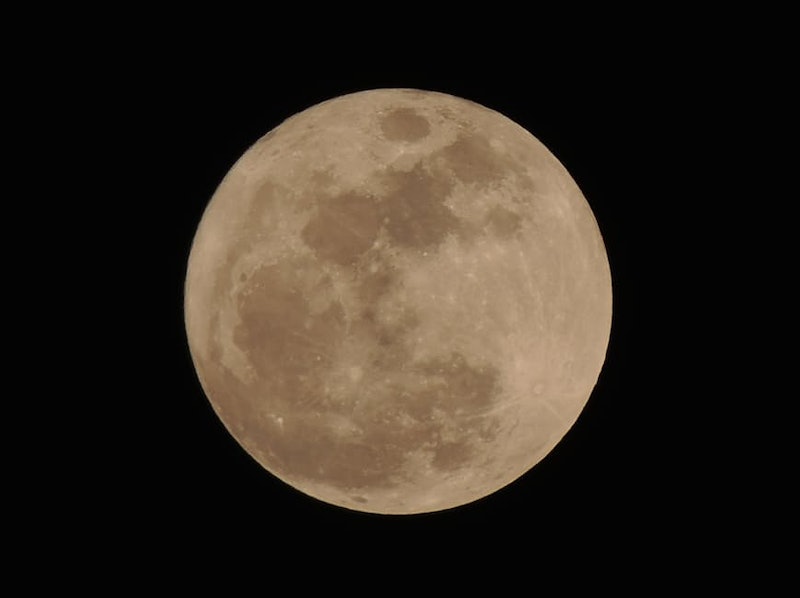 Myths surrounding the full moon seem to be as old as time. For centuries, it's been believed that this lunar phase can affect everything from people's state of mind, to fertility, to crime rates. While most of it seems a bit "out there," scientific studies have shown that the full moon can cause weird things to happen.

Now, it might not include the "lunacy" that folklore tells us about. This phrase "derives from the Latin for 'moonstruck' ... as people used to think that epilepsy and madness were disease caused by the moon itself," says Matteo Cantiello, chief scientist at Authorea and theoretical astrophysicist at the Kavli institute, in an email to Bustle.

That's long since been debunked. But when you think about the way the environment can affect our bodies, a few other bizarre moon effects begin to make sense. Of course, there does exist a little thing called confirmation bias, which might explain many modern reports "lunacy" and other nefarious full moon deeds.

As Scott O. Lilienfeld and Hal Arkowitz noted on Scientific American, "When there is a full moon and something decidedly odd happens, we usually notice it, tell others about it, and remember it ... In contrast, when there is a full moon and nothing odd happens, this nonevent quickly fades from our memory. As a result of our selective recall, we erroneously perceive an association between full moons and myriad bizarre events." Humans like to look for connections and patterns, and we use the moon as a sort of excuse. But, like I said, science does support a few odd goings on. Read on for some of them, and brace yourself for the next full moon.

1. Your Dog May Need A Trip To The ER

In the days surrounding a full moon, researchers have found that "dogs have a 28 percent higher chance of visiting the emergency room," says Cantiello. "The exact cause was not determined, although a possibility is that taking [your dog] out during a full moon is definitely charming, but also increases the chance of getting him hurt." (Sad face.)

2. Tides Can Be More Dramatic

Gravity is what causes the tides to rise and fall each day, with the moon's gravity being the key player, according to science writer Andrea Alfano on TechTimes.com. The sun plays a role as well, but to a lesser degree. That is, until all three celestial bodies combine forces. "When Earth, moon, and sun align — which occurs during new and full moons — the sun's gravitational pull lines up with that of the moon, making these effects stronger," she says. And just like that, we've got ourselves more dramatic tides.

3. Your Menstrual Cycle May Be Regulated

If your period has been a tad irregular, a good ol' full moon may be just what you need. According to a 2011 study published in the journal Acta Obstetricia et Gynecologica Scandinavica, there may be a connection between full moons and menstrual cycles. The study, which tracked the cycles of 826 women ages 16 to 25, showed that nearly 30 percent got their periods around the full moon. "The next biggest grouping of women menstruating during a certain phase of the moon was just 12.5 percent of the participants," said senior health editor Susan Rinkunas on News.Health.com. Unexplainable, but definitely interesting.

4. The Birth Rate Can Increase

An increased birth rate during the full moon is one of the myths that's been passed down for centuries. And, as it turns out, it does have some scientific backing. Researchers in Kyoto, Japan tracked 1,000 births in private hospitals. "They found that more babies were born the closer the moon was to the Earth, when the gravitational pull is the strongest," Rinkunas said. Although the effect was only seen with a supermoons, which are much closer to earth than regular full moons.

5. More Crimes May Be Committed

Many people say the full moon brings about an increase in crime rates. And while that may be true, we can blame it on statistics more than anything else. As science writer Benjamin Radford said on LiveScience.com, "People are more active during full moons than moonless nights." With the extra light, innocent people and criminals alike are drawn out into the night. The mix isn't exactly the best (as you can imagine) and can lead to an increase in theft and crimes. "If there is even slightly more activity — any activity — on a full moon night, then that may translate into a slight but real increase in crime, accidents, and injuries," he said.

6. Your Sleep Can Be Affected

If you're tossing and turning at night, the full moon may be to blame. This strange sleep connection was shown in a study published in the journal Current Biology. According to Rinkunas, study participants spent three days in a sleep lab where they couldn't see clocks or any outside light. Researchers discovered that during full moons the participants took five minutes longer to fall sleep, slept 20 minutes less overall, and had 30 percent less deep sleep — all while being totally "oblivious" to the goings on of the moon.

The "lunatic" moon theory has long been debunked, but some data show a full moon can make us a feel a bit off. A publication in the National Criminal Justice Reference Service showed extensive analyses of data on the subject. Noting the analyses, AccueWeather.com staff writer Chaffin Mitchell said, "Lunar astronomy accurately indicated that the repression of the moon's gravitational influence brings about social tension, disharmony, and bizarre results." Not all studies support this connection, but it's pretty interesting to think about.

8. Surgery Results Can Be Slightly Better

A connection has been found linking surgery success and the full moon. As Rinkunas said, "Researchers found that patients who had an emergency heart surgery called acute aortic dissection repair during a full moon had shorter hospital stays and were less likely to die than patients who had the same operation during two other moon phases." If such a scary thing ever happens to you, you may consider yourself lucky if it happens during a full moon.

On a lighter note, let's talk about sea turtles. Apparently they like to wait until the full moon's tide to come ashore to lay their eggs, according to staff writer Laura Poppick on LiveScience.com. This may have something to do with the more dramatic tide, as mentioned above. If the water is deeper, it may wash them further ashore where it's better for them to make a nest. How cute is that?

While not backed by the best science, casual experiments from gardeners have shown that seeds planted by the light of the full moon tend to grow better. "According to the theory, plants that are sown in the few days before a full moon become stronger and more productive, and those sown as the moon is waning tend to be less so," said reporter Guy Walters in the Daily Mail. This may have something to do with ground water levels, which gardeners say is affected in the same way as ocean water — thus better hydrating their seeds.

11. Coral May Reproduce At A Higher Rate

When it comes to fertility, the full moon may or may not have an affect on humans. But it most certainly does for coral that lives in Australia's Great Barrier Reef. "Each year, hundreds of species of coral spawn together at the same time," Poppick said. "A variety of environmental factors — including temperature, salinity, and food availability — likely contribute to the timing of the event, but the level of moonlight appears to be the main trigger."

See what I mean? Things can get pretty weird. There may not be lunatics, or werewolves, or any other full moon mythical beings running about. And science may debunk and re-confirm our myths on regular basis. But it does seem a few interesting things can happen. If you want to check it out for yourself, keep an eye out for the next full moon in August 2017.