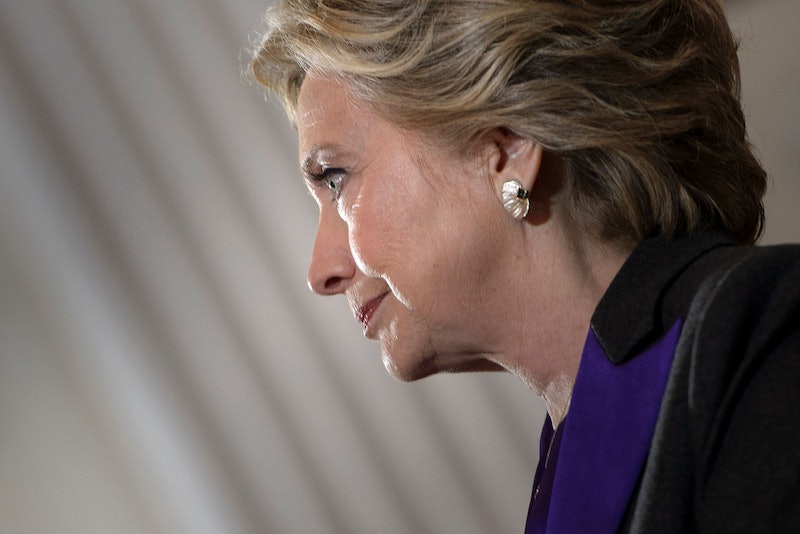 Following Donald Trump’s shocking win on Tuesday, you may have seen a number of petitions going around, asking electors in the Electoral College to vote for Hillary Clinton when they formally elect the president in December. Can electors make Hillary Clinton president on Dec. 19? Putting aside for the moment the question of whether they should buck precedent and vote for Clinton (which, honestly, seems highly problematic to me), do they actually have the power to do so? Technically, yes. Will they do so? That’s incredibly unlikely.

The narrow possibility that Clinton could still be elected depends on the workings of the Electoral College. Here’s the situation: On Tuesday, American’s didn’t actually vote for Trump or Clinton. They really voted for a set of electors in their state who will, in turn, cast the official votes for their state on Dec. 19. So, technically, Trump hasn’t been elected — but a group of electors who’ve pledged to vote for him have. Although the Electoral College was in part originally put in place to ensure that people out in the boonies didn’t do anything too out of whack, these days, the December Electoral College vote is mostly a formality — people simply assume that the electors will vote according to the popular vote in their states. But technically, they don’t have to.

An elector who chooses not to vote in line with the popular vote is known as a “faithless elector.” According to the National Conference of State Legislatures, there’s no federal or constitutional law against faithless electors, but 30 states have provisions in place that would punish or replace electors who don’t vote for the party that nominated them. The constitutionality of those laws isn’t totally clear, in part because they have been so rarely tested — The Daily Dot reports that there have only been 157 faithless electors in all of U.S. history.

A number of petitions have popped up to argue that the 2016 electors should defy tradition and vote for Hillary Clinton. For example, a Change.org petition that’s received more than 2.3 million signatures argues,

Mr. Trump is unfit to serve. His scapegoating of so many Americans, and his impulsivity, bullying, lying, admitted history of sexual assault, and utter lack of experience make him a danger to the Republic. Secretary Clinton WON THE POPULAR VOTE and should be President.

The petition claims that even electors in states that have provisions against faithless electors can change their votes without much consequence. “If electors vote against their party, they usually pay a fine,” the petition states. “And people get mad. But they can vote however they want and there is no legal means to stop them in most states.”

And that appears to be true. However, even if it is theoretically possible that the Electoral College could elect Hillary Clinton, it is extremely unlikely that it will do so. That’s largely because of who the electors are: For each election, the political parties in each state select a group of electors who will vote in the event that the party’s candidate wins. So a state’s Republican party will select a group of Republican electors, and Democrats will do the same. Often people are selected in recognition of their contributions to their party (though in some cases, a person campaigns for the appointment and the party votes on it). So the electors aren’t a bunch of randos off the street — they are people with significant ties to their political parties. In this case, getting the Electoral College to vote for Clinton would mean convincing a bunch of dedicated Republican electors to defy their party (and centuries of precedent) and vote for a Democrat.

And, as Vox points out, it’s not just a few people that would need to be convinced — 37 Republican electors would have to switch their votes from Trump to Clinton to change the election results. That seems… implausible.

And, to be honest, I have some major qualms about this whole idea. As much as I sympathize with the longing for a different outcome to this election — and as much as I am absolutely terrified of a Trump presidency — the push to have the Electoral College rewrite the election results doesn’t sit right with me. We can’t change the rules of the game after the fact. By all means, let’s modify or simply abolish the Electoral College — which, I’ll remind you, was created in part to allow states to count slaves toward their total population (and therefore representation), without allowing those slaves to vote — to prevent future instances of presidents being elected on a technicality and not the will of the people. But for now, we need to heed the advice of Hillary Clinton. “I still believe in America and I always will,” she said in her concession speech on Wednesday. “And if you do, then you must accept this result and then look to the future.”

More like this
5 Ways To Stand In Solidarity With Women In America From The UK
By Sophie McEvoy
How To Fight For Reproductive Rights, Based On How Much Time You Have
By Courtney Young
How Getting An Abortion Has Changed From The ’60s Through Today
By Amanda Chatel
How To Protect Your Digital Privacy If You Need An Abortion Post-Roe
By Kaitlyn Wylde
Get Even More From Bustle — Sign Up For The Newsletter