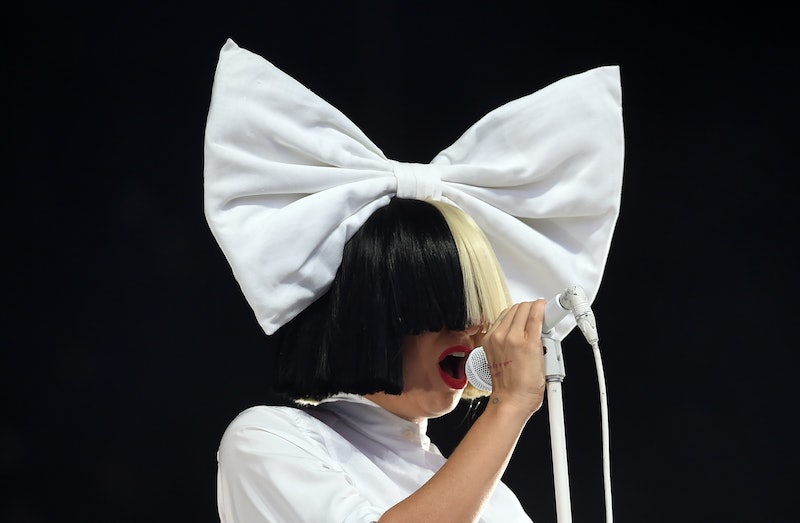 The brightest bit of entertainment news in the last month is, without a doubt, the impending arrival of The Hamilton Mixtape . Featuring a bevy of the best talent working in the music biz today (including Kelly Clarkson, John Legend, and Alicia Keys), the Lin-Manuel Miranda-helmed project is going to deliver everyone's favorite musical to them in an exciting new way. Luckily for fans, you can preview some of these divine tracks before the album drops on Dec. 2, including Sia's beautiful cover of "Satisfied." For those who are dying to hear Sia belt out the pensive bars of "Satisfied," Spotify can help you get your fix. Trust me: You do not want to skip out on previewing this track.

The song was originally sung by Renée Elise Goldsberry, who played Angelica Schuyler, aka Alexander Hamilton's sister-in-law. In "Satisfied," Angelica sings her warm wishes for a happy marriage between her sister, Eliza, and Hamilton. She remembers the night she first met Hamilton. Angelica acknowledges that she was Hamilton's intellectual equal and that she found him attractive, but gave up pursuing him because her sister was so besotted with him. It's a wistful, emotional, soaring song that contemplates a future that never comes to fruition, while reflecting on the weighty choices of the past. For Sia, a singer who has recently taken a deep dive into examining her past through song, connecting to the song was a no-brainer.

Sia's take on "Satisfied" is heart-wrenching and perfect. She's joined on the track by Miguel and Queen Latifah, singing as Hamilton and Eliza, respectively. The lyrics of "Satisfied" getting belted out from the same singer who heartrendingly sang "Chandelier" and "Elastic Heart" nails the "What if?"-melancholy of the Hamilton number. In short: It's beautifully done. Sia also excitingly shares the singing duties with Latifah. She's naturally adroit at rapping the quick verse of Angelica's remembrances of meeting Hamilton for the first time. Both Sia and Latifah work so well off each other, while Miguel's smooth voice laces the song with soul perfectly. Basically, you need this song in your life ASAP. I'm not kidding. Listen to "Satisfied" on repeat.

Bonus: If you want to have your heart melted, take a moment to revel in Jonathan Groff (aka Hamilton's King George) reacting to Sia's version of "Satisfied" while Miranda records. His pure astonishment and joy will give you all — and I mean all — the happy feels.

Basically, it's hard to be unhappy when listening to the Hamilton soundtrack in any of it versions; The Hamilton Mixtape is poised to prove that to fans once more when it's released in a few weeks time.