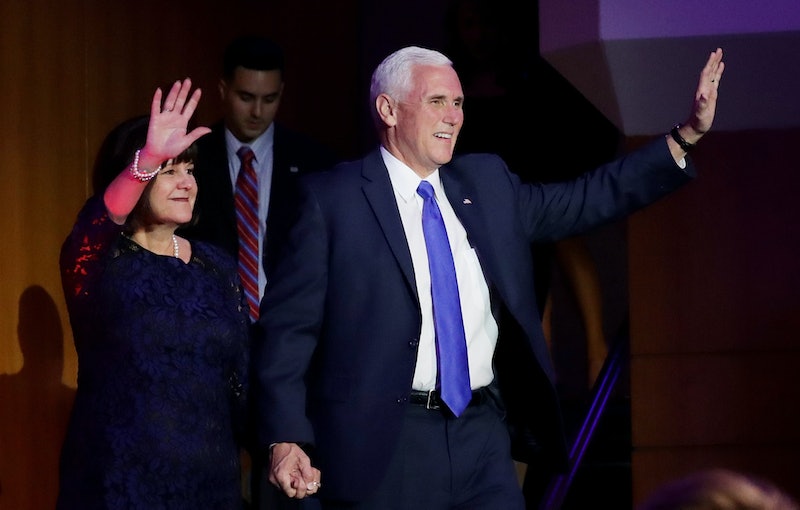 Since the results of Tuesday night's election were announced, Americans have been grappling with the knowledge that not only will Donald Trump be the next president of the United States, but Mike Pence — the Republican credited with spearheading the movement to defund Planned Parenthood — will be vice president. It's a scary prospect, but here's an idea to make you cackle in feminist joy: Donating to Planned Parenthood in Pence's name. The next four years are certainly going to be tough for women's healthcare, but at least there's an opportunity for some poetic justice to be served.

Pence, an evangelical Christian and strong anti-abortion advocate, has had a beef with Planned Parenthood since at least 2007, when he sponsored an amendment to defund the organization. He continued to introduce similar legislation until 2011, when the House of Representatives passed a bill blocking federal funds for the organization. (The bill later failed in the Senate.) Under his time as governor of Indiana, he passed severely restrictive laws regulating access to abortion in the state, and he slashed state funding to Planned Parenthood in particular. This led to five Planned Parenthood clinics shutting down; these closures were later tied to an HIV outbreak in one of the counties where a clinic was forced to shut its doors.

That being said, considering Pence's history and Trump's own vow to defund Planned Parenthood, the organization is likely to face difficult times ahead. But there is a silver lining: Trump's victory appears to have sparked a wave of donations, as well as a rise in demand for long-acting contraceptives like IUDs.

Donations are instrumental in protecting women's healthcare, especially in the current political climate, but some donors have taken things a step further by making the donations to Planned Parenthood in Pence's name. It's a win-win: Planned Parenthood receives money that helps them stay open, and you get the satisfaction of donating to a cause that Pence actively works against.

If you can afford it and want to get in on the trend, here's a step-by-step guide to donating below.

1. Head To The Donation Page

2. Select The "In Memory" Option

After you choose the amount you're donating, select the option to give in honor of someone else.

Fill in Pence's information accordingly. His name is Mike Pence (obviously), and you can use the address for the Office of the Governor in Indiana.

After that, just fill in your own contact and payment information and hit the "make your gift today" button at the bottom of the page. Trump's administration may be a terrifying, infuriating prospect, but much can be done to protect women's rights — starting with helping to keep Planned Parenthood afloat. Besides, isn't it nice to imagine Pence breaking into a cold sweat every time another donation is made in his name?

More like this
25 Inspiring Quotes From Black Women To Celebrate Black History Month
By Kyli Rodriguez-Cayro and JR Thorpe
How Ovulation Affects Your Sense Of Smell, Libido, & More
By JR Thorpe and Lexi Inks
24 History-Making Black Women You Probably Didn't Learn About In School
By Ayana Lage and JR Thorpe
These Artists Are Reimagining Black History Month To Create A Better Future
By Katie Mitchell
Get Even More From Bustle — Sign Up For The Newsletter
From hair trends to relationship advice, our daily newsletter has everything you need to sound like a person who’s on TikTok, even if you aren’t.