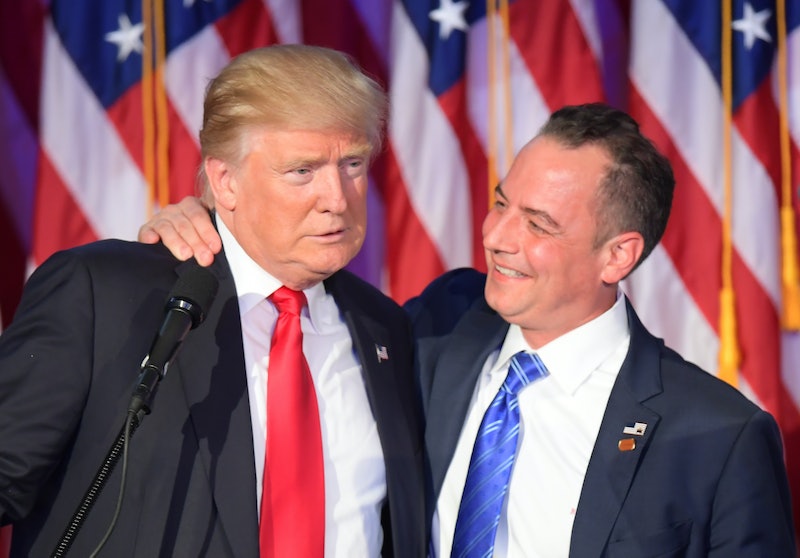 The Trump administration is beginning to take shape. President-elect Donald Trump named Reince Priebus his chief of staff, multiple news outlets reported Sunday. News of the Republican National Committee chairman's appointment as White House chief of staff, a key position within the administration, was later confirmed by Trump's transition team. It was also announced that chief executive of the Trump campaign, former Breitbart CEO Steve Bannon, had been hired as chief strategist and senior counselor to the president.

"I am thrilled to have my very successful team continue with me in leading our country," Trump said in a statement released Sunday by his transition team. "Steve and Reince are highly qualified leaders who worked well together on our campaign and led us to a historic victory."

In naming Priebus, a man set to be the longest-serving RNC chairmen in the party's history, Trump could very well anger the supporters who carried him to the White House in the first place. Trump framed his presidential campaign around the idea that he was a political outsider and in October vowed to "drain the swamp," or kick the political outsiders out of Washington. It was a message many in his base rallied around. And yet you can't get much more political insider than Priebus.

Along with a long tenure heading the GOP, the RNC chairman is known for being a close ally of House Speaker Paul Ryan. His appointment to a key White House position could be a signal Trump is looking for ways to work with the establishment rather than against it. The day before Trump announced Priebus as his chief of staff, Republican political strategist Roger Stone tweeted the move "would cause a rebellion in Trump's base." Stone had served as an adviser to Trump until the businessman cut ties with him in early August.

A statement from Trump's transition team said Priebus and Bannon would work "as equal partners to transform the federal government, making it much more efficient, effective and productive."

Priebus called the appointment an honor Sunday in a brief statement expressing his gratitude for the opportunity. "I am very grateful to the president-elect for this opportunity to serve him and this nation as we work to create an economy that works for everyone, secure our borders, repeal and replace Obamacare and destroy radical Islamic terrorism," Priebus said, echoing several key points of Trump's campaign platform.

It remained unclear Sunday who would replace Priebus as RNC chair.