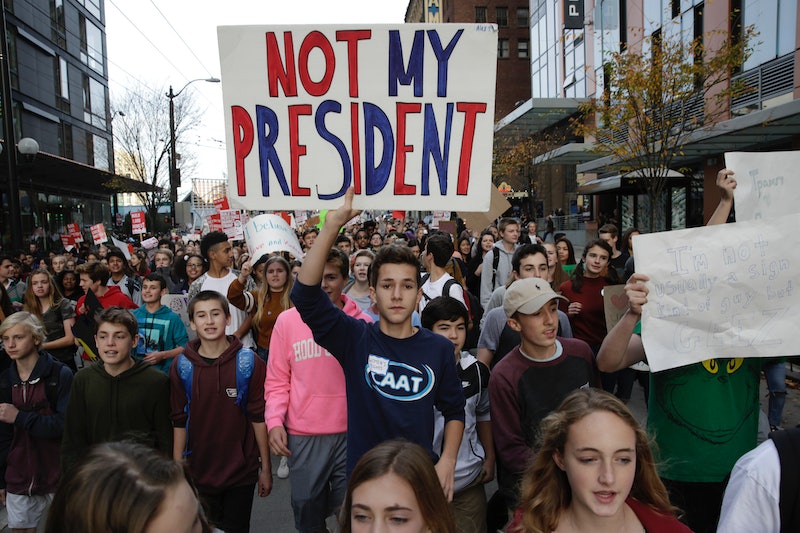 In the aftermath of the 2016 election, one thing has become clear: a lot of people are terrified, angry and determined to make themselves heard. From the Women's March on Washington planned for the day after Trump's inauguration, to the many anti-Trump protests occurring across the country, the protest movements across America are strong and are only likely to get stronger as concrete issues of policy begin to materialize in the new administration. But psychology reveals to us that there is actually more than just anger and a sense of group feeling that compels some of us to get out on the streets and protest — and that there are many contextual factors that influence how people feel about protests, and even how likely those protests are to succeed.

Protests have been part of the fabric of human civilizations — whether imperial or democratic, fascist or run by monarchs — for an incredibly long time. We have records of a labor strike in ancient Egypt in the 12th century BC under the pharaoh Rameses III, nearly 4,000 years ago; it was a sit-down protest among scribes who worked on the pharaonic tombs, because nobody had given them rations for nearly three weeks. We can't speculate on the psychology of people who died thousands of years ago, of course, but you can definitely feel sympathetic to their grievances; and since then, everyone from Rome's aristocratic women to Gandhi has attempted to change the world through mass protest. It's a common human impulse — there's more to it than just making a placard and coming up with some snappy slogans.

Why Do Some People Protest While Others Don't?

You get upset about something, you go out into the street, that's it. Right? Not so fast. There's actually quite a lot of social psychology theory about what drives certain people to protest and what holds others back. Some theories have been more popular at particular points in time, but we're gradually coming to understand that the complexity of peoples' motivations and understandings of protest are likely a combination of theories.

There are, according to political scientists, three theories currently at the forefront of our understanding of why people protest: expectancy-value theory, relative deprivation theory, and social identity theory. These sound tricky, but actually boil down to fairly fundamental beliefs. Expectancy-value theory is all about the expectations one has about an activity and what value you think you're going to get out of it; people with particular expectations and ideas abut the success of protests are probably going to be more likely to do them. Relative deprivation theory means you compare yourself with some other standard (black societal treatment versus white societal treatment, for example, or workers versus bosses), see that there's a mismatch, and get annoyed enough to protest. And social identity theory is the practice of feeling part of a group or identity, which makes people more likely to protest if they feel that group is threatened or powerless.

There are, however, other things in play. Professors Jacquelien van Stekelenburg and Bert Klandermans, world experts on the psychology of protest, point out that both emotions and social networks play a part in protest decisions. There are, they say, "two emotional routes to protest: an anger route... and a contempt route when legitimate channels are closed and the situation is seen as hopeless, invoking a ‘nothing to lose’ strategy". And those create different kinds of protest. Social networks also contribute, online or in real life, because they help people to share political information and spur each other into action. It's a complex cocktail.

The "relative deprivation" factor has been one of the biggest in our modern discussions of protest. Income and privilege gaps between sectors of society, and the perception that one group is deprived of something that another group has easily, are often the engines that drive protests. Psychology Today called it "an important predictor of social unrest" and cited a classic study in which people were asked if they'd rather have a huge home surrounded by slightly smaller homes, or a medium home surrounded by much smaller ones. People tended to choose the medium one, even though it was smaller overall, because it represented such a jump in status relative to everybody else. If relative status is threatened or entrenched relative deprivation flares up, protests ensue.

Professor van Stekelenburg pointed out to the London School of Economics that the likelihood that a protest or series of protests will be effective (i.e. if they'll change the way politician think, get lawmakers to pay attention, and ultimate create legal change) depends on a number of different things. She highlights four: "a democratic regime, a programmatic party system, a polity open to the challenger’s’ claims, and political allies’ support." This is bad news for protestors who are shouting out against a very powerful regime or in a climate that doesn't favor them; a lot of protest is about getting the timing right, and autocrats and monarchs don't have to listen if they don't want to.

You Can Often Stop Protests By Justifying The System

A fascinating series of studies published in 2011 found that there was one interesting way of quelling protest feelings in people: something called "system justification," or arguing that the way things are, the status quo, is both good and necessary. The scientists looked at using "system justification" in three different areas: American students protesting against Wall Street in 2008, May Day austerity protestors in Greece, and British members of a teacher's union. In each case, they found that if they exposed the subjects to thinking that justified the way things were, they were less likely to be angry and less willing to protest, while anything that was "system-rejecting" amped them up. They also looked at uncertainty: the more uncertain people were, the more worried they became about their futures and the correctness of their judgements, and the less likely they were to protest. This goes the other way, too: to get people to protest, you need to make them believe that the system isn't working for them, and (more trickily) figure out a way to give them reassurance.

Protesting Can Be Good For You

This is an interesting addendum: nobody's suggesting that you should go out into the world and grab a placard purely for the sake of your health. But research from the University of Sussex in 2002, in which 40 different activists were interviewed about their involvement in over 160 protests actions, showed that the prevailing emotion of protestors, particularly when they recalled their time later, wasn't anger. It was happiness and empowerment. "Empowering events were almost without exception described as joyous occasions," the main psychologist explained. "Participants experienced a deep sense of happiness and even euphoria in being involved in protest events. Simply recounting the events in the interview itself brought a smile to the faces of the interviewees."

The Sussex scientists believe that the happiness of the experiences wasn't just a matter of rose-colored glasses; it was about feeling part of a group, sensing that you were really making a difference, and experiencing mutual belonging and help with fellow protestors. This may, in the run-up to protests, feel irrelevant, particularly if they're of the "we're furious and we're not going to take any more" kind. But it's notable that you may feel less hopeless about the state of your country, and the world, if you get out there with thousands of other people and protest about it.