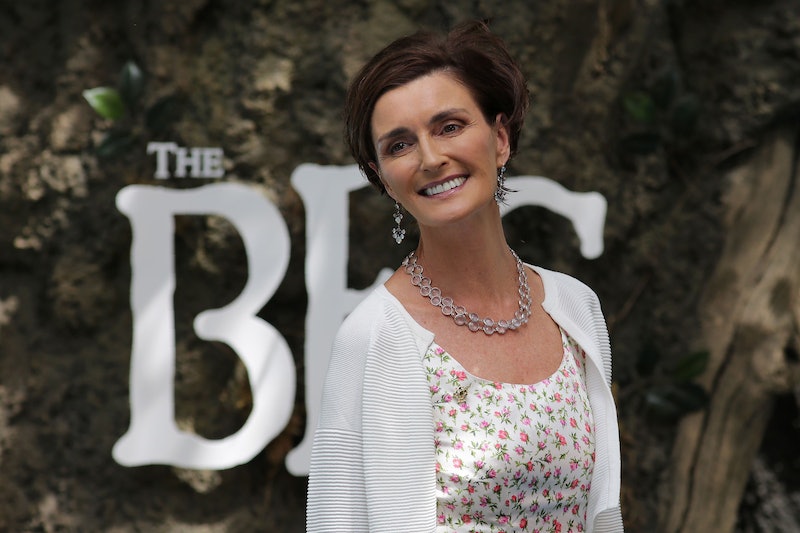 From James and the Giant Peach to the classic tale of Matilda, Roald Dahl's books and stories have shaped several childhoods in a way that's far from being forgotten. The 2016 release of Disney's The BFG has brought yet another one of Dahl's beautiful stories to life on the big screen. After years of witnessing her father's legacy unfold onto multiple generations of readers, Lucy Dahl — Roald Dahl's youngest daughter — shared what it is she loves about The BFG and her father's work.

"My favorite character out of all of them is the BFG because he reminds me so much of my father," Dahl tells Bustle. In the story, the BFG (or Big Friendly Giant) is a benevolent and caring 24-foot-tall giant who collects and distributes good dreams to children, truly making him the kind of friend you'd want to have by your side. In a world where orphaned children are abused and mistreated, this gentle giant sheds a beam of light on the life of young Sophie, a girl who lives at Mr. Clonker's orphanage. Together, these two lost and lonely characters find friendship and love through one another.

What many fans of this classic tale of friendship and hope might not know is that the BFG himself shares a few of the same characteristics with Roald Dahl himself. "People might not know that the shoes the BFG wears were styled after a pair of my father's Norwegian sandals that he used to wear through the summer, and his clothes were styled after some of my father's clothes," Dahl said. "There's lots of little bits and pieces ... And the BFG — he lived under the orchard behind our garden in our childhood home, so to me he's very real."

These bits and pieces of Roald Dahl are present not only in the books themselves but also in some of the film adaptations of his beloved stories — particularly The BFG. "I would have to say I think The BFG is the most beautiful adaptation of them all," Dahl said. "When I first saw the film, I honestly felt like I had just spent two hours again with my father. The way that Steven Spielberg had recreated him was very personal."

Portrayed by Tony and Oscar award-winning actor Mark Rylance, the title character of The BFG is the embodiment the story's essence of love and friendship. Combining Rylance's extraordinary portrayal of the BFG with fantastic CGI effects, and a director like Steven Spielberg — with such famous works as Jaws, E.T. The Extraterrestrial, and the Indiana Jones series — The BFG film captures all the beauty of this magical story on the silver screen.

For fans of all ages, The BFG is a tale of wonder and love that falls in line perfectly with all of our favorite childhood classics. "It's wonderful to see his stories become absolute classics in the same realm of Alice in Wonderland, Oliver Twist, and those types of timeless stories ... timeless in a way that will always speak to children," Dahl said. "I think the reason that he always can speak to children forever and ever is because he understood children. He understood what they wanted, what their triumphs were, what it felt like to be the underdog."

As children, and even as adults, we look for understanding in the books we read to reassure ourselves that we are not alone, and that's exactly why Roald Dahl's stories have been able to stand the test of time. As far as which film adaptation Roald Dahl himself would have admired the most, Dahl tells Bustle that The BFG and Fantastic Mr. Fox would have likely been her father's favorites. "I think both of those are equal in their sentimentality in what our life was like, and in the same genre of my father's way of thinking."

But, for Dahl, it wasn't so much about the animation or mediums used to create the film adaptations, but about the calmness and essence that each film managed to pull from the original stories about what life was like in the United Kingdom for Roald Dahl. "Those directors really did take the care and the time to slow things down," Dahl said. "So many films now are all about bright lights and flashy lights and noise and color. Those are those films where life is sort of slowed down to almost quiet time. It's slowed down so that the heart can speak to the heart, which doesn't happen very much anymore in film. I think that's the way that my father wrote — the heart speaking to the heart.

Lifelong readers of Roald Dahl's work will agree his stories very much do speak to the heart. Dahl himself had a very particular style and method of writing, which helped him to produce so many wonderful works. Being November, NaNoWriMo might be on your mind this very second, as it is for many Roald Dahl fans who are scrambling to reach their word counts. Were Roald Dahl here today to give you a piece of advice as you write, it's likely he would pull out his favorite piece of writing advice told to him by the great Ernest Hemingway. "He used to say, 'Always stop when you're going good,' and then he'd laugh because of the incorrect grammar," Dahl said.

"Basically, what that means is, when you're writing story and you know where you're going with it, before the next page or the next paragraph or the next beat, stop and walk away and live your life — because then you have something to come back to and something to look forward to." So, if you are participating in NaNoWriMo, remember to take a break from your own mind while the ideas in your head are still flowing to ensure you don't find yourself staring worriedly at a blank page during the remainder of the month.

Whether you're a writer yourself or not, Roald Dahl's works might just inspire you to create your own form of magic in the world. From the story itself to the recent film adaptation, The BFG is a reminder for readers of all ages that we are never truly alone and everyone can find a little bit of magic if they look hard enough. "The BFG is really a beautiful love story of friendship between two people from very different worlds who shared the same loneliness and the same troubles in life," Dahl said. "They both had beautiful hearts and they found each other."