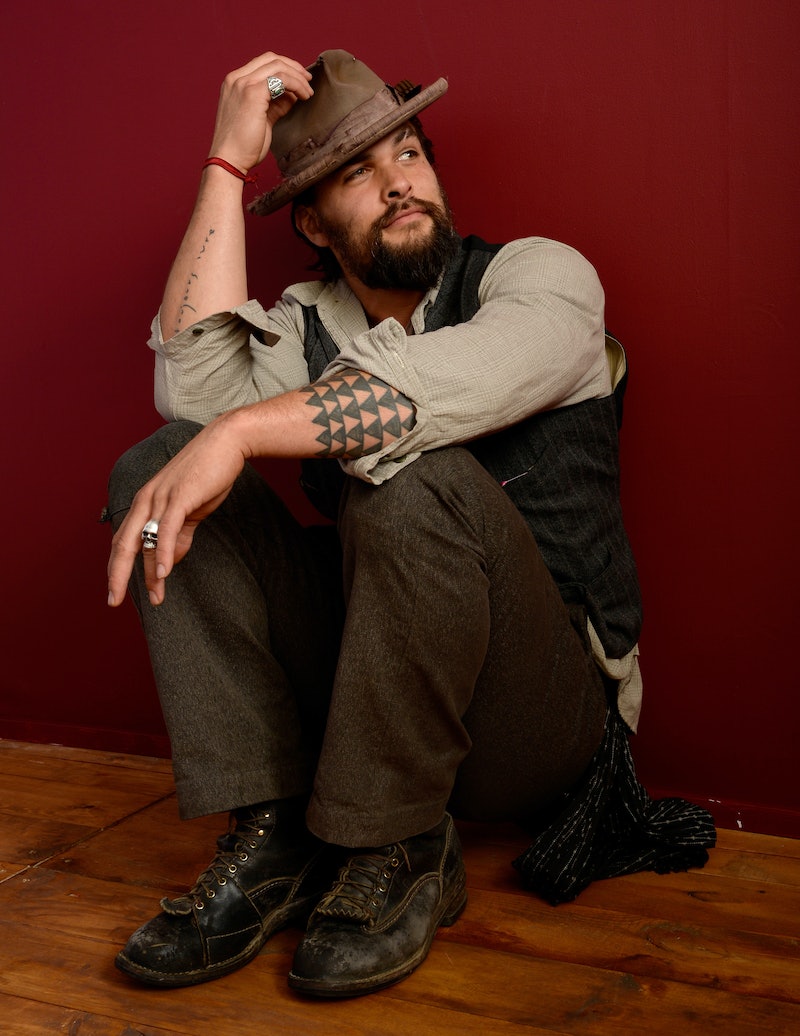 It has been over five years since Game of Thrones' noble horse lord Khal Drogo took his last tortured breath, smothered to death with a pillow by his beloved Khaleesi, but the character played by Jason Momoa remains as popular as ever. He only lasted for one season on the fantasy hit and here we are, waiting for Season 7, and fans are still asking when Khal Drogo will return to Game Of Thrones . Well, the Dothraki king may not be making a comeback anytime soon, but Momoa sure is. Not only is he starring in the upcoming Justice League movie and his own solo Aquaman film, he also has the new Netflix drama Frontier on the horizon as well — and the first photos from Frontier look intense.

According to Netflix, Frontier is an "action-packed adventure drama following the chaotic and violent struggle to control wealth and power in the North American fur trade in the late 18th century. Told from multiple perspectives, the series takes place in a world where business negotiations might be resolved with close-quarter hatchet fights, and where delicate relations between Native tribes and Europeans can spark bloody conflicts." Momoa will be playing the character of Declan Harp, "an ambitious, confident, charismatic and untamed man with a reputation for being a ruthless trader, driven by lust and revenge."

The subscription service has released the first official Frontier pictures, and they give fans a glimpse at the bloody drama that's about to unfold:

Yep, that looks about right. Momoa may not be playing a character named Khal Drogo, but it's pretty clear that Declan Harp will be every bit as ferocious as the Dothraki horse lord. In fact, I'm getting a distinct Game Of Thrones-meets-The Revenant vibe from these pictures, with Momoa basically playing a beefier, even more bloodthirsty version of Hugh Glass, The Revenant character that won Leonardo DiCaprio an Oscar earlier this year. If that movie's brutal bear attacks and graphic scalpings and its whole sleep-inside-of-a-carved-out-horse-carcass thing weren't enough for you, Netflix might just bring it with Frontier.

The best part of Frontier is that you won't even have to wait that long to see it, since all six Season 1 episodes will be available for streaming on Jan. 20, 2017 — that's in just about two months. (If you live in Canada, you can see it even earlier; the show is currently airing north of the border on Discovery Canada.)

Even more good news: you won't have to live in anxiety over whether or not Netflix will cancel the show, since Frontier has already been renewed for a second season, as reported by Variety. This is pretty great news all around for Momoa fans who want to see more of him on TV — but his return to Game of Thrones will have to wait.