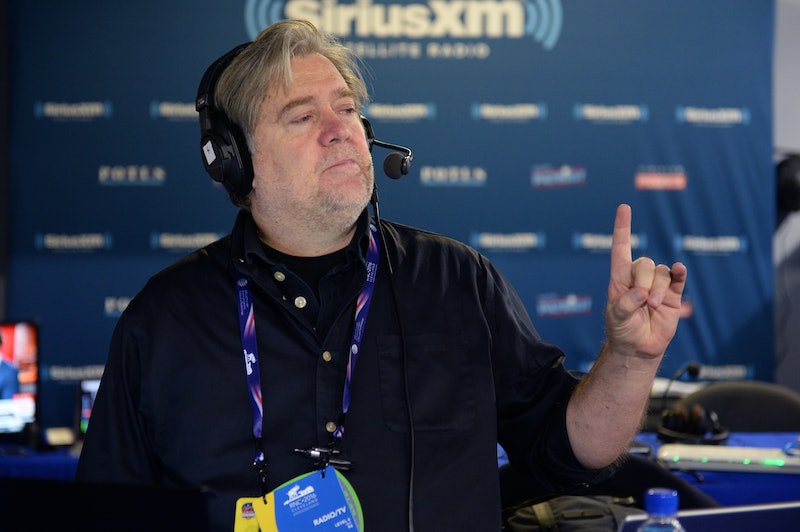 Although his 17-month campaign was light on specifics about what a potential administration would look like, President-elect Donald Trump has started announcing key appointments. These provide an ominous look into the likely environment at the White House over the next four years. Aside from being dominated by straight, white, Christian men, perhaps the most controversial appointment Trump has made so far is naming former Breitbart publisher and Trump campaign CEO Steve Bannon as chief strategist. Here's why so many people are panicked about that choice, and what you can do to voice your own concern.

For the uninitiated, Bannon is a proud member of the so-called alt-right, and spent the past four years turning Breitbart, already a right-wing conservative outlet, into a megaphone for white supremacists. Even fellow conservative pundits, like former Breitbart editor Ben Shapiro, have warned about how extreme Bannon is.

And though established GOP leaders like House Speaker Paul Ryan are happy to wait and see what Bannon does with his newfound national influence, many Americans aren't willing to take that chance. Esquire said that Trump's decision to bring Bannon to the White House with him is just as bad as if the president-elect had picked former Ku Klux Klan grand wizard David Duke for the role of senior adviser.

In fact, Duke told CNN today that he thinks Bannon's appointment is "excellent," while other white supremacist leaders expressed hope that Bannon would hold Trump to the campaign promises he made about deporting 11 million undocumented people, building a wall along the Mexican border, and bringing "law and order" to the "inner cities" that Trump described as "hell."

In his interview with CNN, Duke made clear that he's counting on Bannon to saturate the upper levels of the administration with the alt-right's racist, white supremacist way of thinking. "You have an individual, Mr. Bannon, who's basically creating the ideological aspects of where we're going," Duke told CNN. "And ideology ultimately is the most important aspect of any government."

If that isn't the ideology you want influencing the highest office in the land, there are a pair of petitions currently circulating online demanding Trump rescind Bannon's appointment. Both focus on the claim that a self-proclaimed white nationalist is unfit for any job in the White House, let alone such an influential position at the top of the incoming administration. It's a refrain echoed by several Democratic leaders in Congress:

The Southern Poverty Law Center (SPLC), a progressive legal nonprofit based in Birmingham, Alabama, also launched a petition addressed to the president-elect, bluntly stating that "Steve Bannon has no place in the White House." What's more, appointing the objectively radical Bannon flies in the face of Trump's election-night promise to "bind the wounds of division" currently gripping the country, SPLC's petition claims. A media spokesperson for SPLC tells Bustle that more than 153,000 people had already signed the petition as of 7 p.m. ET the day the petition was posted.

A second petition, hosted on Change.org, asks Republican leadership to reject Bannon's appointment. In just 24 hours, that petition has garnered more than 17,700 signatures, well on its way to its goal of 25,000 signers. Started by Oregon-based writer, professor, and editor Shaindel Beers, the Change.org petition asks Trump, Speaker Ryan, and the Republican National Committee to affirm that "Bannon's vitriol and divisiveness have no place in the White House." The petition goes on to point out Bannon's long history of problematic statements, including his 2011 remarks claiming that liberal feminists didn't like conservative women because people like Sarah Palin and Michelle Bachmann weren't "a bunch of dykes that came from a Seven Sisters school."

Although Bannon has in the past denied that he is anti-Semitic, a 2007 court document stemming from his divorce from Mary Louise Piccard claimed that Bannon told his now-ex-wife that he didn't want their children going to school with "Jews." That court document also alleged that Bannon had assaulted Piccard, then destroyed a telephone when she tried to call for help. A spokesperson for Bannon said he maintained a great relationship with his ex-wife, and the assault case was eventually dismissed.

While it's still unclear precisely how much power Bannon will have in Trump's White House, his appointment as senior adviser indicates that Bannon will certainly have the president-elect's ear. And that, POLITICO noted, could spell major trouble for journalists and publications that are hoping to uncover possible corruption in a Trump administration. By elevating Bannon (and subsequently, the right-wing outlet Bannon oversees) to this influential post, "Donald Trump will have a weapon no president has ever wielded," wrote POLITICO's Jack Shafer.