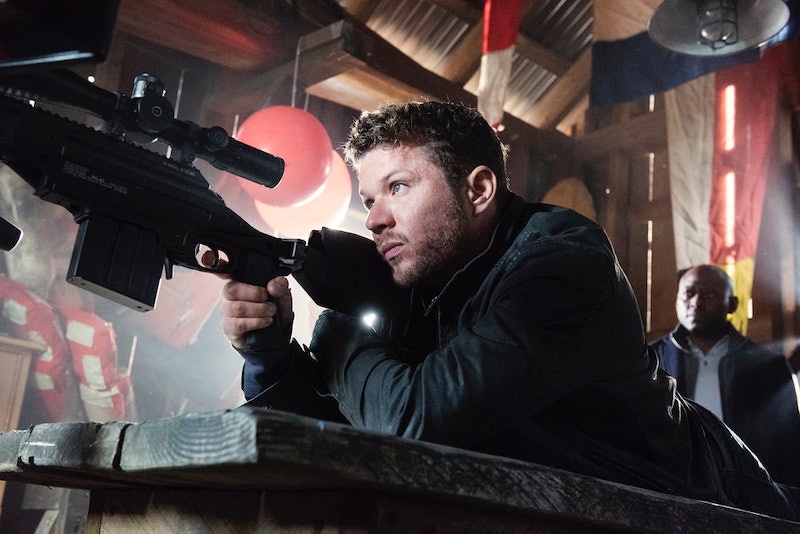 This Tuesday, fans will finally get their long-awaited first look at Ryan Phillippe in Shooter, the new USA drama based on the 2007 Mark Wahlberg movie of the same name (which in turn was based on the 1993 novel Point Of Impact by Stephen Hunter). The action series has been delayed twice: first, Shooter was pushed back a week from its intended July 26 premiere after a sniper in Dallas killed five police officers; then USA pulled Shooter from its summer schedule for good when more officers were gunned down in Baton Rouge later that month. Now, the drama that eerily reflected real life is finally taking its delayed bow. But there's another way that the show might find parallels in true events: Is Shooter character Bob Lee Swagger a real person?

Scouring the annals of history, you're not likely to find someone with that particular colorful name — but that doesn't mean he's not real. In fact, Point Of Impact novelist Hunter based his sharp-shooting protagonist on an actual historical figure: USMC Scout Sniper Carlos Hathcock. The Arkansas native was a well-known figure in the Vietnam War, famous among both the Marines and the Viet Cong (who nicknamed him "Long Trang," or "White Feather") for racking up the highest confirmed kill count of the entire bloody conflict. "The number 93 reflects his confirmed kills, but his actual total is believed to be well over 100," the LA Times reported in their obituary of Hathcock. "As a testament to his effectiveness, North Vietnam once put a bounty of $30,000 on his head."

Of course, just because Hunter was inspired by Hathcock in his creation of Swagger doesn't mean that the television show Shooter is in any way based on the man's actual life. For one thing, he's certainly not currently a 42-year-old man living in modern-day America, given that the retired Marine passed away in 1999 at the age of 57 after a battle with multiple sclerosis. Secondly, he was almost certainly never involved in helping to unravel a conspiracy to assassinate the President of the United States, as Swagger is in Point Of Impact, the Shooter film, and the Shooter TV series.

In fact, Hathcock's career as a sniper was effectively over before he returned home from Vietnam, so there would have been no calling him out of retirement to help save the country even if there had been an outlandish plot to assassinate POTUS. According to the LA Times obituary, "Hathcock's career as a sniper came to a sudden end outside Queson in 1969, when the amphibious tractor he was riding on was ambushed and hit a 500-pound box mine. Hathcock pulled seven Marines off the flame-engulfed vehicle before jumping to safety. … He came out of the attack with second- and third-degree burns over more than 40% of his body and was evacuated to Brooke Army Medical Center in Texas, where he underwent 13 skin graft operations. The nature of the injuries left him unable to perform effectively again with a rifle."

The obit goes on to detail how, upon returning home from Vietnam, Hathcock suffered from depression in addition to MS, the latter of which eventually confined him to a wheelchair — so the Hathcock's post-war life was clearly very different from Swagger's. But the real man would probably take a small amount of comfort in knowing that his fictional counterpart is still out there saving the world. The LA Times concludes its obituary with a passage from Ernest Hemingway:

Certainly there is no hunting like the hunting of man, and those who have hunted armed men long enough and like it, never really care for anything else thereafter

"He got that right," Hathcock was quoted as having said about Hemingway's words. "It was the hunt, not the killing." Thanks to Shooter, some part of Hathcock will get to continue the hunt — even in death.