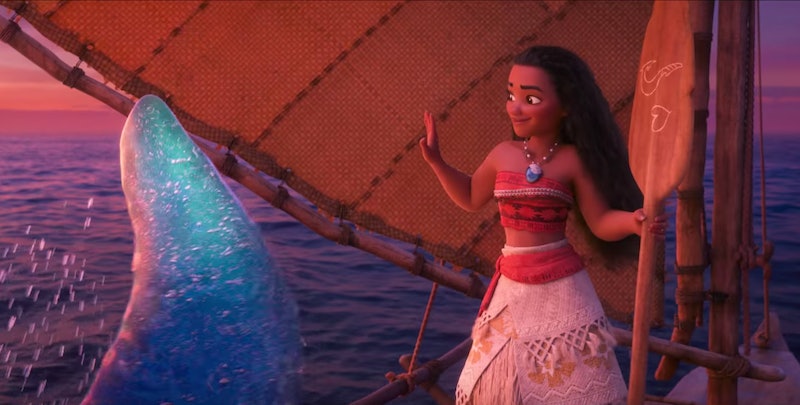 November feels like the month that would never end, but even though this month brought us the craziest election in forever, it is also giving us Moana. Disney's newest animated feature, Moana, introduces its newest female protagonist, also named Moana — the studio's first Polynesian female heroine (we're well beyond that Princess title). Moana is a first for Disney: ethnicity aside, Moana doesn't have a love interest, and she's not helpless or captured against her will. She's a tough, teenage heroine who goes her own way, sailing across the seas in search of a mystical island. It's not surprising, then, that her name perfectly embodies her spirit, and the answer to what does Moana mean is pretty telling of her character.

According to SheKnows, Moana means "large body of water" in Hawaiian and Maori (a Polynesian language). Moana is very much a Polynesian story, and it's clear filmmakers made great efforts to make the film's Polynesian roots as authentic as possible. They worked closely with members of the Oceanic Story Trust, according to The New York Times. Star Aulii Cravalho, who voices Moana and is a native Hawaiian, told Seventeen, "I'm Hawaiian, and I can honestly say I'm proud of this film." I'd assume that proud spirit includes Moana's name.

One key aspect of Moana is its heroine's own people's dedication to navigation and exploration across oceans, something that mirrors an important part of Polynesian culture. Specifically, Moana embraces Polynesian wayfinding navigation that used celestial charts and intricate canoes to navigate. "Wayfinding isn't something they made up for animation purposes. It was truly almost lost in the Polynesian culture," Cravalho said during a recent interview with The Huffington Post. With navigation and the ocean playing such huge roles in Moana, the name not only represents the heroine Moana, but also the larger themes of the film.

Moana's name is also an expression of her deep relationship with the ocean. "The ocean is a friend of mine," she tells demigod Maui in the trailer for Moana . The ocean frequently shows up to help Moana, and has since she was a baby. It helps her float and stay safe as a baby, it helps her find her way to Maui. It's no surprise she should share its name. But, make no mistake, Moana might receive help from the ocean, but she's a woman on a mission with or without boosts from her namesake.

Moana is a new brand of Disney heroine: she's not a princess, but a chief's daughter. And, at 16, she's already getting ready to inherit her father's position as chief. With a little help from the ocean she loves so much, Moana goes on a magical adventure with Maui to find a fictional island. No sweet prince or charming pauper required. Sure, her name comes in handy sometimes, but I think it's safe to say that, in this case, Moana outshines the ocean by a long shot.

More like this
These 25 International Horror Movies On Netflix Prove Fear Is A Universal Language
By Bustle Editors
Read The First Pages Of Emma Rosenblum’s Highly Anticipated Debut, 'Bad Summer People'
By Samantha Leach
20 Photos Of The 'Hocus Pocus' Cast Then & Now
By Radhika Menon
12 ’90s Movie References You Missed In 'Do Revenge'
By Radhika Menon
Get Even More From Bustle — Sign Up For The Newsletter