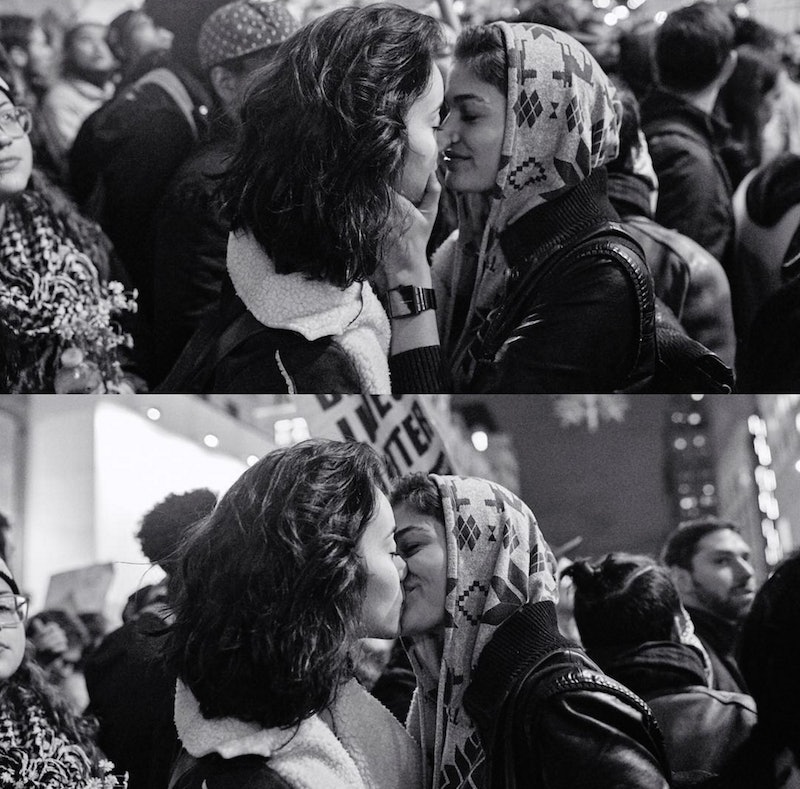 After Trump's election, several U.S. cities erupted in protest. Mostly, the protesters have been marching and chanting criticisms of the future president and vice president's views and policies. But photographer Hennessy Vandheur captured something different: photos of two women kissing at a Trump protest on Fifth Avenue in New York. So far, they have over 1,000 Instagram likes and over 30,000 likes in a tweet by the user @killfemme. Perhaps they've garnered so much attention because after an election that's been discouraging to many, they demonstrate hope.

Fordham University student Laura Hetherington has confirmed to Bustle over Twitter direct message that the two photos depict her and her girlfriend, Giovanna “Jo” Barba. Hetherington told Buzzfeed that she and Barba were there to protest "hate and intolerance in the form of racism, sexism, discrimination towards the LGBTQ+ community" and to promote "emotional support and understanding." She hopes they'll serve as a "reminder for those who see it: In the midst of hatred, opposition, and oppression our love will persist."

Many LGBT people considered Trump's election a defeat, given that vice president-elect Mike Pence has advocated gay conversation therapy, expressed opposition to same-sex marriage, and opposed anti-LGBTQ discrimination laws and Trump himself has wavered in the views he's professed on marriage equality and other LGBTQ issues.

For Vandheur, the kiss stood out because it showed that despite all the hate that has come out during this election, people were still showing love. "When I saw the two girls holding one another, so lost within each other amidst this huge crowd all protesting around them, I was struck by how lovely it was," he tells Bustle over Twitter direct message. "Just a really sweet, pure moment in all this post-election chaos."

Vandheur believes that while to many of Trump's supporters, his election has come to legitimize homophobic or other forms of intolerance, the couple's kiss is a symbol of a different kind.

"I think a lot of people, especially the LGBTQ community, lost a lot of hope when Trump was elected because he is a symbol of oppression against them and many other groups considered minorities," he says. "Seeing the two women kissing and so openly in love just brings back that hope, that hey, it's gonna be okay. There's still love, everyone can still be themselves and stand unafraid and confident. It's a sign of positivity in the uncertain future."