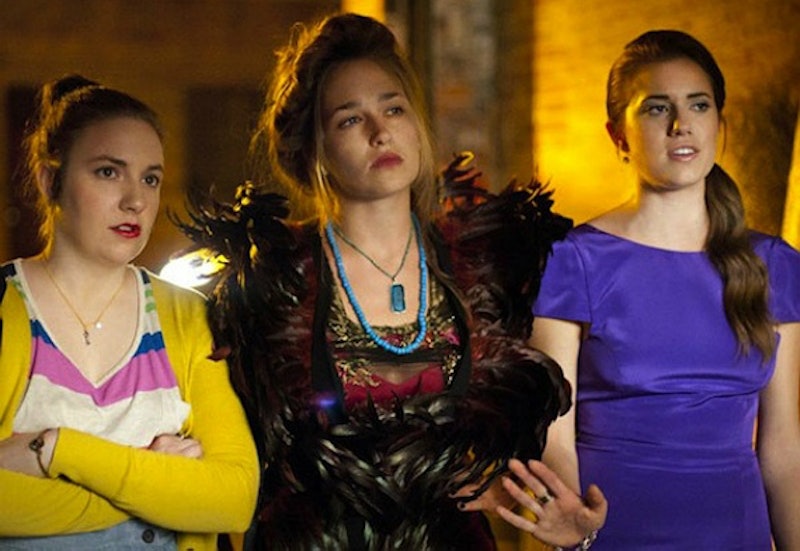 Let's talk about loft parties. How cool are they? So many artsy people standing around in black turtlenecks talking about existentialism! Okay, does anyone actually have loft parties? And if so, where's my invite? And does this Tommy Hilfiger make me look out of place?

The Loft Party occupies a similar place in our cultural imagination as does the Cool Girl; e.g., we want to attend/be one, but we're not entirely sure it really exists, at least not in its purest, most cliché form. But we've got the signifiers of the Loft Party down pat. There's exposed brick. There are candles everywhere. There's definitely a performance artist in at least one of the corners, and somebody, somewhere, has already used the word "conceptual" twice in one sentence. There's no food, because the party-goers subside on nothing but Ideas, but there sure is a lot of "cheap red wine" around (note: not actual cheap red wine, gross). Add a skyline view and some chalkboard paint in the kitchen and you've got yourself a shindig.

Let's say you've been invited to an actual Loft Party — what in the world would you wear to the event? It's simple, really: anything that makes you look a little closer to the intelligentsia than you really are. If that means you force yourself to get a first tattoo and double cartilage piercing on the way to the party, so be it.

Well, obviously. Black is the color of 1950s beat poets and mysterious leading ladies and anyone who's ever felt moody in Paris. You'll fit in at the loft party, no problem. But black for black's sake isn't enough...

Nothing says "I live by my own rules but also pay attention to Fashion Week" like someone wearing a transparent sheath with artfully placed undergarments beneath. Knowingly chic granny panties simply aren't optional here.

I obviously don't endorse the habit, but if we're talking authenticity, well, chances are everyone and her cute boyfriend will have something tightly rolled and smoking perched elegantly between their fingers.

Your hair should match all the leaning-precariously-over-the-roof-talking-about-Life-in-very-literal-terms you'll be doing. Which you will be doing, because this is a Loft Party.

5. Something that could double as modern art.

At a Loft Party, there's always a chance you'll be called upon to "give back" to the "energy" of the place by engaging in some sort of terrible performance circle. Unless you're feeling bold enough to scoff at your friends' vapid idealization of capital-a Art, make sure you're wearing something that you can easily turn into a performance, like a scarf you can whirl around or bracelets that you can clink together in a "trance-like" state.

6. Something that Andy Warhol would want to film you in.

While getting dressed, as yourself the hard question: "Would Andy Warhol, seeing me in this, demand to put me in his newest art film?"

If the answer is no, take off your pants, add a necklace, and ask yourself the question again.

Something has to contain all your wild hair and wilder emotions, right? Make sure you don't let it slip that you'd really be stoked if the DJ put on a little Kesha...

Loft Parties are one of the rare times in artistic circles when naturalism is totally abandoned and everyone's appreciative of a little artifice. Go ahead, flatter those drugstore feathers at the "bartender" (he's really the host's kid brother).

Wearing a hat inside is like wearing sunglasses inside, with less risk of getting stoned by angry mobs who think you look like an idiot. It conveys to the crowd that you're kind of too cool to be there (as in, you might leave any minute), but also serves to showcase your amazing taste in early 1900s fedoras.

Every time someone gushes over your (inevitably perfect) outfit, tell them you don't remember where you got it. Pause. Run your hands through your hair. Say, "Oh wait, now I remember — this little vintage store down on 75th. Totally run-down place but you can find some decent pieces." Then laugh merrily — aren't material goods so not the point? — and suggest that everyone engage in a round of collaborative finger-painting.