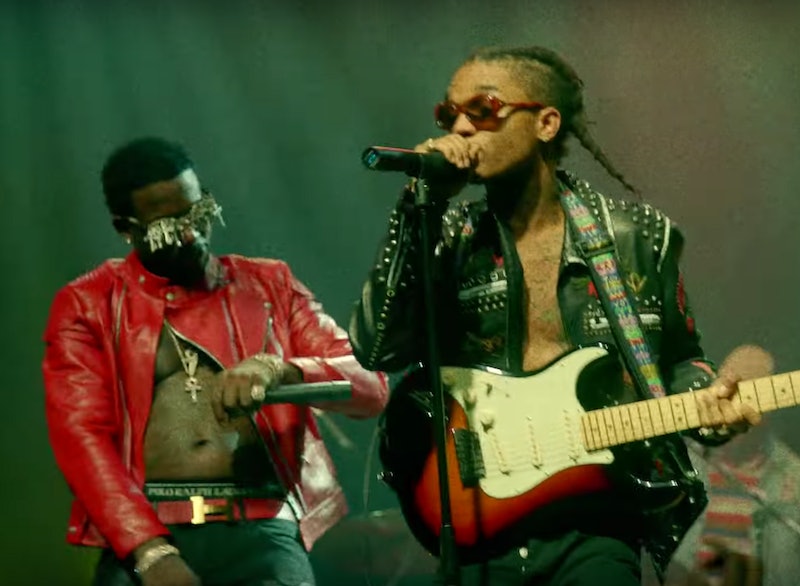 It’s believed that the first instance of the Mannequin Challenge was performed by high school students at Ed White High School in Jacksonville, Florida, and posted by Twitter user @pvrity___ on October 26. However, that video didn’t include “Black Beatles.” People started taking up the challenge and making new videos, and, at some point (it’s not clear exactly when), the first few lines of Rae Sremmurd’s “Black Beatles ft. Gucci Mane” became the backing track for almost all of them. In video after video, we see everyone from high school students to Hillary Clinton frozen in place to the lyrics,

That girl is a real crowd pleaser Small world, all her friends know of me Young bull living like an old geezer Quick release the cash, watch it fall slowly Frat girls still tryna get even Haters mad for whatever reason Smoke in the air, binge drinking They lose it when the DJ drops the needle.

Rae Sremmurd even performed their own Mannequin Challenge at a November 3 concert in Denver.

“Black Beatles” was released in late September, as part of SremmLife 2, the second album from Rae Sremmurd, an Atlanta-based hip-hop duo comprised of brothers Khalif “Swae Lee” Brown and Aaquil “Slim Jxmmi” Brown. The track did fairly well on its own, garnering about 30 million views on YouTube before the Mannequin Challenge struck in late October, according to The Daily Dot.

SremmLife 2 executive producer Mike Will Made It told Fortune that “Black Beatles” almost didn’t make it onto the album. He said that he wrote the music for the song days after the album had been completed. Mike Will sent the music to Swae Lee, who quickly recorded vocals, even as he was still fiddling with the lyrics. When Mike Will went to mix the song, he had only assistant engineers to work with, because the engineers believed the album was done and had left for vacation.

Pushing for “Black Beatles” to be on the album at the last minute turned out to be a great decision, as downloads and views of the song (and the accompanying video) have increased dramatically since it became the rallying cry of the Mannequin Challenge. According to Billboard, this week “Black Beatles” jumped to No. 1 on the Hot 100 list with 144,000 downloads and 43.3 million streams on YouTube, Spotify, and other sources. If nothing else, the song’s success demonstrates that memes — even inexplicable ones — can have a huge impact.

More like this
On TikTok, Users Are Pranking Their Loved Ones With Minions Makeup
By Emma Carey
Memes Inspired By The Popular BeReal App Are Going Viral
By Emma Carey
The Best Memes & Tweets About The Discontinuation Of The Choco Taco
By Alexis Morillo
I Tried The $20 TikTok Viral Oishii Strawberries — Here's What I Thought
By Sophie Hanson
Get Even More From Bustle — Sign Up For The Newsletter