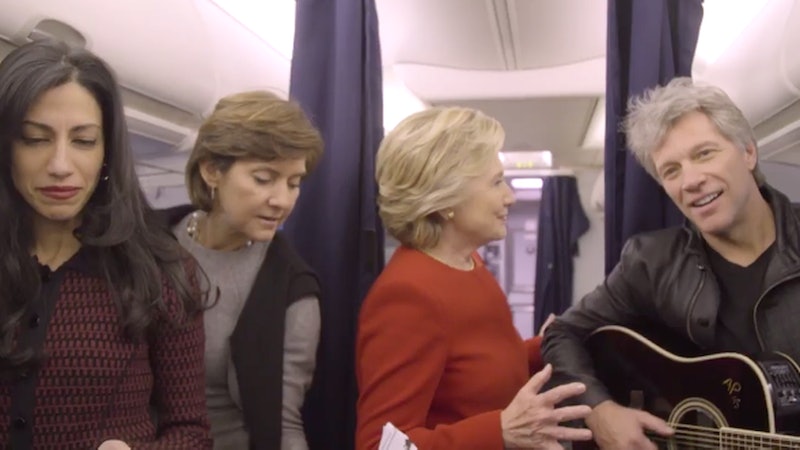 Now that the #MannequinChallenge is sweeping the nation so unstoppably that even Hillary Clinton and her crew have taken it, a lot of people are wondering: where did the mannequin challenge come from? As it turns out, the origins of the mannequin challenge aren't that hard to trace — although they do remain a little difficult to explain. The mannequin challenge consists of a group of individuals freezing in dramatic or often difficult-to-maintain poses, acting like literal mannequins as a camera pans around the room. Curiously, all of them are backed by the song "Black Beatles," by hip hop duo Rae Sremmurd. The first of these videos is believed to have been uploaded by Twitter user @pvrity___, a high school student at Ed White High School in Jacksonville, Fla., on Oct. 26. (Bustle has reached out to @pvrity___ for comment and will update upon hearing back.)

In @prvrity___'s original video, several students are frozen in position as the camera pans around them, until eventually one student unfreezes and lifts another who is still frozen in mannequin form. The original is still up on Twitter, where it has generated over 4,000 retweets since it was posted two weeks ago.

From there, there seems to be a disconnect in exactly how it inspired spinoffs, and why the song "Black Beatles" is involved. Even the pop duo themselves can't seem to supply an answer, although they did respond to the challenge by doing one of their own at a recent concert.

Since the launch of the meme, it has inspired thousands of spinoffs, ranging from groups of friends to entire football stadiums.

People are putting their own spins on them — this pole dancing class, for instance, managed to get everyone in midair.

The meme usually starts with the hook of the song "Black Beatles," specifically on the lines:

That girl is a real crowd pleaserSmall world, all her friends know of meYoung bull living like an old geezerQuick release the cash, watch it fall slowlyFrat girls still tryna get evenHaters mad for whatever reasonSmoke in the air, binge drinkingThey lose it when the DJ drops the needle

That being said, the song itself is hardly new — it came out on Sept. 22 of this year on Rae Sremmurd's second album, SremmLife 2. It had already achieved marked popularity before the challenge went viral, racking up over 40 million views on YouTube.

As you can see from watching the music video, though, there is very little in the song that explains why it would be the one used across the board in this viral meme. Even Rae Sremmurd is flummoxed, although the pop duo have both been retweeting versions of the meme from their personal accounts the past few days. Nonetheless, it's caught on like wildfire — seeming to reaching Peak Internet when Tuesday morning, the morning of Election Day, Democratic presidential nominee Hillary Clinton posted one of her own (featuring Bon Jovi, because of course).

Bustle will update this post when we hear back from Twitter user @pvrity___ about what inspired the challenge to begin with, but until then we can chalk this meme up to what we usually do — high school kids who are way, way cooler than we'll ever be.