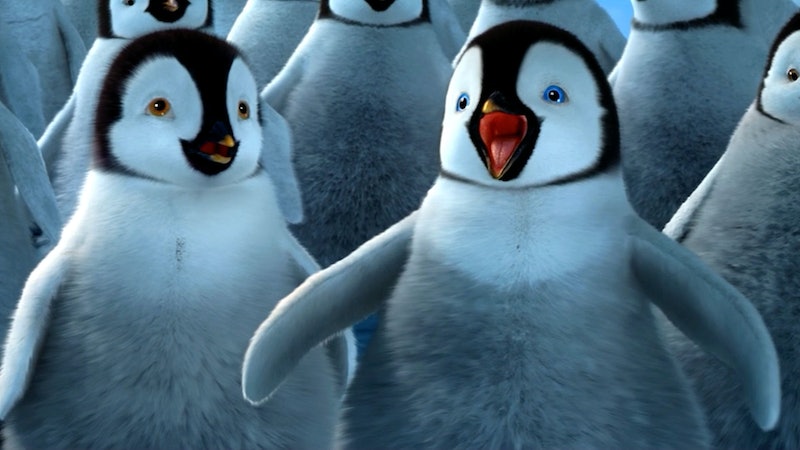 It's hard to believe that Happy Feet came out ten years ago. While there's been no shortage of incredible animated movies since the movie was released in 2006, Happy Feet left a lasting impression for several reasons. The movie tells the story of the emperor penguin Mumble (voiced by the indelible Elijah Wood), who has no Heartsong, meaning he feels alienated from the other penguins who all have amazing voices. However, Mumble has another talent that is hard to ignore — he can tap dance. And there's one thing about Happy Feet that everyone should remember for an important reason.

Throughout the course of the movie, Mumble discovers that his "hippity-hoppity" ways make him unique and are something to be treasured, which is inspiring for anyone that's ever felt a bit different. But alongside this message of positivity and self-worth, runs a much more serious topic that's still a huge concern for us all a decade later. As The Wall Street Journal wrote upon Happy Feet's release, "One particularly arresting moment: the sight of a beautifully feathered penguin with his neck stuck in a six-ring canned-beverage holder — which the bird regards as a special talisman until it starts to choke him". Despite being a movie made for kids, Happy Feet didn't shy away from exploring environmental issues, and that's still why it's so important, a decade on.

The movie's director, George Miller, told The Wall Street Journal, "You can't tell a story about Antarctica and the penguins without giving that dimension". Despite the movie's marketing campaign focusing on the fact that penguins can now dance and sing, the team behind Happy Feet were firmly on board with the film's political message. Alan Horn at Warner said, "There is a very strong environmental message, but it's couched in the context of entertainment," and the way in which Happy Feet combines a personal story with serious environmental issues sets it apart from other animations. The delicate way in which it highlighted the problems the world is facing likely helped it win the Academy Award for Best Animated Picture.

In Nov. 2009, The Washington Post reported that "Climate change is one of the main threats to penguins' existence. It is eroding the frigid habitat they depend on in the Antarctic," but it's not the only issue. As Happy Feet highlighted, pollution continues to have a huge impact on penguin populations, as does commercial fishing. In fact, The International Union For Conservation Of Nature reported in Nov. 2016 that the Ross Sea in Antarctica "is set to receive protection from commercial fishing for an initial period of 35 years... Home to vitally important populations of Emperor Penguins and Adélie Penguins, Weddell Seals, Crabeater Seals and Leopard Seals," it seems incredibly likely that Happy Feet was a call to action.

Now more than ever, it's crucial to remember that our actions can have a huge and irreversible impact on the world around us. If you take one thing away from Happy Feet, let it be that we all need to look after the world around us the best we can. Whether that means cutting up the plastic beer can holders before you throw them out, or campaigning for climate change charities, there are ways in which everyone can help. Just think of the dancing penguins!