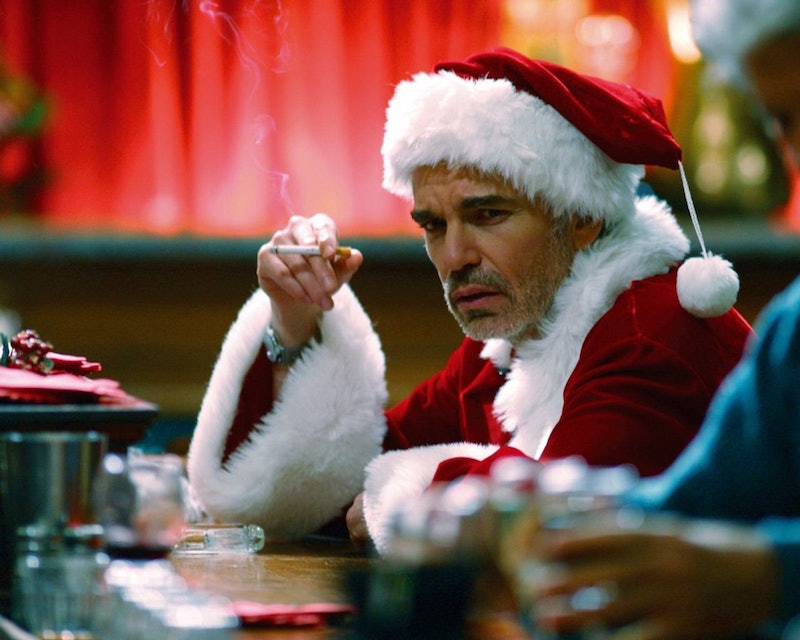 The holidays are here already, believe it or not, and that means movie theaters are already welcoming what they hope will become new seasonal favorites. Last weekend it was the comedy Almost Christmas, and on November 23 it will be Bad Santa 2's turn to bring tidings of good cheer. The film is of course a sequel of the 2003 comedy Bad Santa, but since it's been 13 years since the original, you could probably use a Bad Santa recap before seeing Bad Santa 2 .

The first film stars Billy Bob Thornton as Willie, an alcoholic, womanizing, professional thief who uses the cover of his job as a department store Santa — along with his accomplice Marcus (Tony Cox), who dresses as an elf — to rob shopping malls every Christmas season. Willie's drinking and lusting after women frequently interferes with his work as a Santa Claus, and the pair come under the scrutiny of the mall's security chief, Gin (Bernie Mac). One day at work, Willie meets Thurman Merman (Brett Kelly), a developmentally-challenged and overweight boy who believes Willie to be the real Santa Claus. After discovering that Thurman lives alone with his senile grandmother, Willie robs him and starts living in his home. However, thanks in part to his new relationship with a woman with a Santa fetish named Sue (Lauren Graham), Willie starts to develop a soft spot for Thurman, who is routinely bullied by a group of kids.

Gin eventually confronts Willie and Marcus and tells them that he knows what they're up to, and that he wants half the loot from their next heist in order to keep quiet. The pair reluctantly agree, and feeling that he has nothing left to live for, Willie attempts suicide; giving Thurman a note first that details their planned Christmas Eve heist of the mall. However, when he notices Thurman has a black eye, he postpones his suicide and finds the kid who gave it to him and beats him up. He then decides to teach Thurman to defend himself, and grows even more attached to the kid.

Unbeknownst to Willie, Marcus and his wife murder Gin to keep him out of their plans. Willie, meanwhile, has changing priorities, and almost has something resembling a family with Thurman and Sue. On the night of the heist, which Willie reluctantly still takes part in, Marcus reveals that he's going to kill Willie and cut him out completely. But before he can, the police show up and intervene, thanks to the note Willie had given Thurman. Willie escapes and makes a break for Thurman's house so he can give him his Christmas present, but the police shoot him just as he reaches the front porch. He survives, and at the end of the film it's revealed that he will likely avoid jail time thanks to writing the letter that tipped off police; and also that Marcus and his wife have been arrested and Sue has been made Thurman's temporary guardian.

In the sequel, a lot has changed compared to where things left off. Sue is out of the picture, now-21-year-old Thurman doesn't appear to have kept in constant contact with Willie (though they do reunite in the film), and Marcus is out of prison. Furthermore, Willie's reformation didn't take hold, as he is once again drinking, womanizing, and suicidal — and he's even reuniting with Marcus to rob a charity of all things. It will be interesting to see if Willie follows the same redemption arc in the sequel as he did in Bad Santa, or if the movie keeps his darkness until the end this time around.