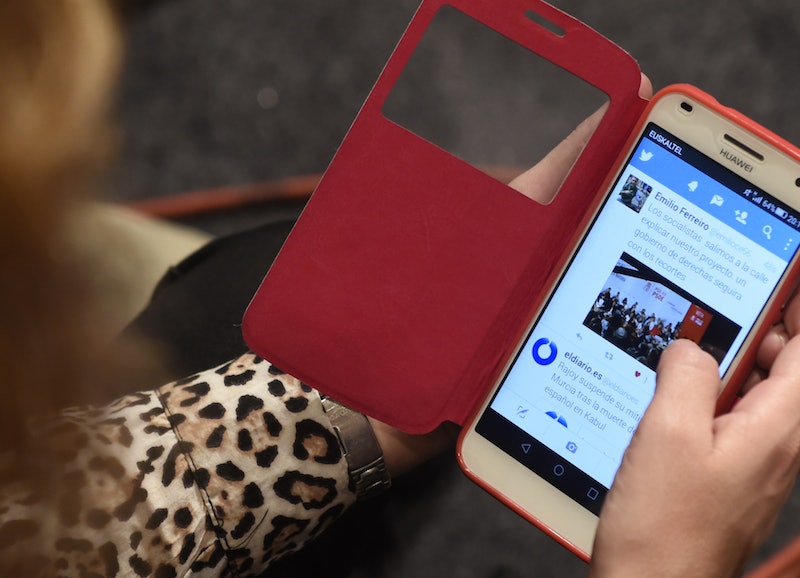 Musing about mechanics or tweeting about tech? Well, you must be a guy then. And if you're into sharing your thoughts about your feelings online, then you must be a woman. Right? These are online gender stereotypes we've all probably fed into albeit, unknowingly, at some point in our lives. But a new study suggests that the gendered assumptions we make based on social media posts are totally wrong. I mean, it's not exactly surprising that stereotypes have just been proven wrong; that's the thing about stereotypes: They're not accurate. But hey, at least we have more evidence dismantling perceived gender norms... even if I can't believe it's still necessary to do so in 2016.

A new study in Social Psychological and Personality Science from researchers at the University of Pennsylvania saw participants voice their opinions about Twitter users based solely on the content of their posts. These participants were asked to guess the age, gender, education level and political views of a wide variety of tweets in several different experiments. Interestingly, when words like "force,” “news,” and “research” cropped up, they were almost always wrongly categorised as being from a male user, reports The Independent. In contrast, posts that covered the terms “love,” “cute,” and “beautiful” were often mistakenly thought to be from female users. Jordan Carpenter, lead author of the study, said of the results according to The Independent, "These inaccurate stereotypes tended to be exaggerated rather than backwards. For instance, people had a decent idea that people who didn't go to college are more likely to swear than people with PhDs, but they thought PhDs would never swear, which is untrue."

Another couple of outdated gendered beliefs that arose from the online research included feminine-sounding users being assumed to be more liberal in their political leanings, and posts about technology usually coming from men. Of this last point, Carpenter added, "Men do post about technology more than women. However, this stereotype strongly led to false conclusions: Almost every woman who posted about technology was inaccurately believed to be a man."

Carpenter believes research like this will help eradicate online stereotypes once and for all — and hopefully, he's right. The benefits of a feminist society have been written about extensively, after all. Gendered stereotypes on and offline harm the economy; if more were women granted the same rights as men in the workplace, the UN argues, the global economy would experience significant growth. Gendered stereotypes also feed into a pattern of toxic masculinity for guys, heaping pressure on them to bury their feelings and suppress their emotion in the name of being "manly."

And interestingly, Carpenter's research follows on from an extensive study of 68,000 people earlier this year which suggests that the language used by women on Facebook today is less passive and more assertive than we all give them credit for, although men did favor discussions surrounding more competitive and activity-based topics (guns, shooting, winning, and thelike). Admittedly, we've still got a hell of a long way to go until we live in a society free of harmful gender stereotypes, but surely if we can conduct more research into how we're now communicating with each other differently and prove that we're possibly bringing about a collective shift in mindset, we can then go some way towards accelerating this move towards widespread equality — both online and off.

More like this
25 Quotes About Love To Share During Pride Month 2022
By Madeleine Aggeler and Emma Garza
Remember These Ancient Pieces Of '90s Tech?
By Lucia Peters and Emma Carey
Is TikTok’s “Villain Era” Trend Just An Excuse For Bad Behaviour?
By Chanté Joseph
What The History Of Pride Month Means For Celebrations Today
By Jay Polish
Get Even More From Bustle — Sign Up For The Newsletter