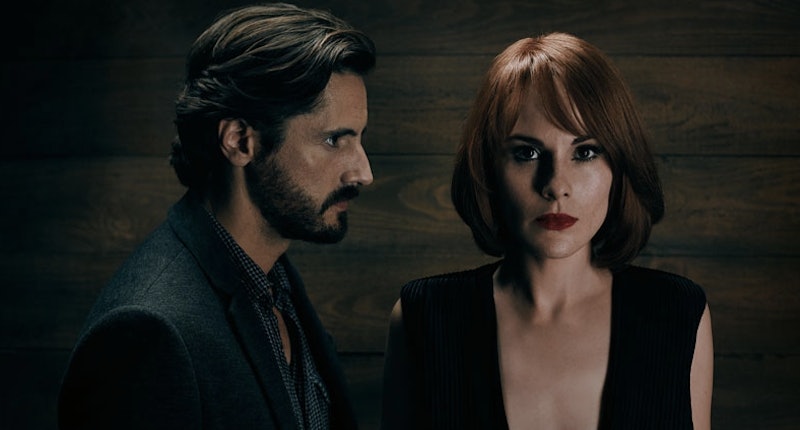 As 2016 gets closer to its end, you'd be forgiven for needing something to pull you out of reality for a bit, especially since so many of your favorite shows have started taking their Thanksgiving or, even worse, winter breaks. Enter the most non-TNT drama ever to hit TNT's drama lineup: Good Behavior . Yes, the show that has Lady Mary from Downton Abbey getting into lots of trouble. Luckily for us, the series is far more than Michelle Dockery's anti-Lady Mary protest (though she did admit during a Q&A at the New York premiere of the series that she was thankful she could finally "move [her] arms").

Dockery stars as Letty, an ex-con-con-artist who's really not doing so great with this whole "probation" thing. She's struggling with a substance abuse problem, which in the pilot, seems to range from vodka to crack (no joke). Thanks to this penchant for addiction, Letty's 10-year-old son lives with her mother, who keeps Letty out of the young boy's life as best as she can. Now, at first, this probably doesn't sound like much of an escape. This is some dark, rough stuff.

But, then comes all the sexy stuff you've seen on the posters — the intrigue, wig-swapping, and of course, the sex. Letty is, in many ways, escaping her own dark corners by diving headfirst into cons. She dons a sexy outfit, a new wig, and in one particularly memorable encounter, a new accent, escapes into these characters and plays out her own Ocean's Eleven-style fantasy. This leads her to become entangled with an actually dangerous criminal, murderer-for-hire Javier (played by Juan Diego Botto), whose own schemes serious dwarf Letty's hotel-grab-bag of stolen Louboutins and minibar items. Naturally, these two are forced into a partnership that carries them through the first season (you don't cast a beguiling actor like Botto and then just cast him aside after a few episodes).

The series is steamy and glam enough to feel like a distraction, while still dealing with some very real substance around Letty's issues and her family dynamic. It's escape television that will still entertain your brain, which frankly, is the exact kind of escape television we all need at a time like this.

TNT has made the first episode available on YouTube (above), but watch at your own risk. Dockery's Letty is easy to get addicted to.