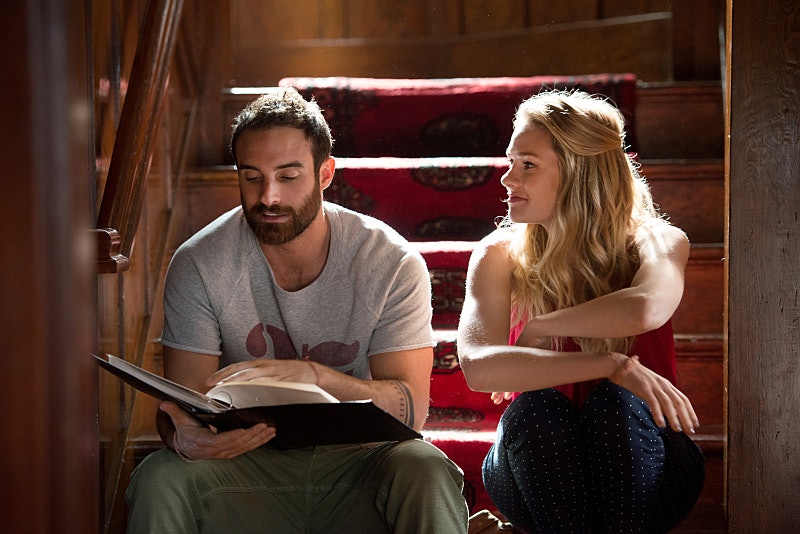 Watching the budding and high-spirited romance bloom between Evie and Xavier on No Tomorrow has been the greatest singular viewing pleasure thus far in the season. These two are the best kind of opposites that makes for exciting chemistry. They're learning new things about each other every day and having fun doing it. What's not to love? C'mon now. But it would seem that there are still some things are better kept close to the vest. At least that's how Xavier felt on tonight's episode, wherein the mystery of why he is so distant from his father was finally revealed. One thing became clear very quickly: whether or not the world is ending in a few months, Xavier needs to reach out and reconcile with his father immediately.

It's been clear for some time that Xavier's relationship with his parents is relatively non-existent and kept very much in the past. We learned earlier in the season that Xavier's mother had died. After discovering a videotape of her in an old time capsule, Xavier listened to his mother's voice for the first time in what seemed like years. It was clear that this was the parent who had had the greatest effect of Xavier. He was closest to his mother and had never quite recovered from the loss of her. His father was a different matter entirely. In acknowledging his untended relationship with his father, Xavier forced himself to come to grips with the fact that he can't always run away from his problems or compartmentalize them.

It began with the insane debt Xavier has racked up. $93,000 to be exact. The belief that he could live on plastic until the world blew up was fault thinking that led to all of his possessions being repossessed. After this serious turn of events, Xavier tried to control which big secrets he revealed to Evie because he didn't want to involve her in his problems. Noble, but totally misguided. Evie eventually found out about the debt he'd racked up and after a minor confrontation, she encouraged Xavier to consider taking a big step in being honest and getting out in front of his problems. This, she suggested, should begin by reaching out and reconnecting with his father.

In the days after that discussion, Xavier finally revealed to Evie that his father was an alcoholic and was physically and emotionally distant for most of Xavier's childhood. The two had ostensibly has a major falling out years ago. Xavier couldn't bear the thought of opening himself up to his father once more only to be heartbroken. Evie encouraged Xavier to read the letter of reconciliation his father had sent, if only to soften him to the idea. She even reiterated that she would be right by Xavier's side to support him in reconnecting with his father.

This was a big moment of development for Xavier. Usually the wise advisor or goofy free-spirit, seeing Xavier so vulnerable makes you really feel for the guy. Ultimately, we saw a man who had a lot of reckoning of his own to do. His personal affairs are anything save in order and it's nice to see him taking a step in the right direction to remedy it.