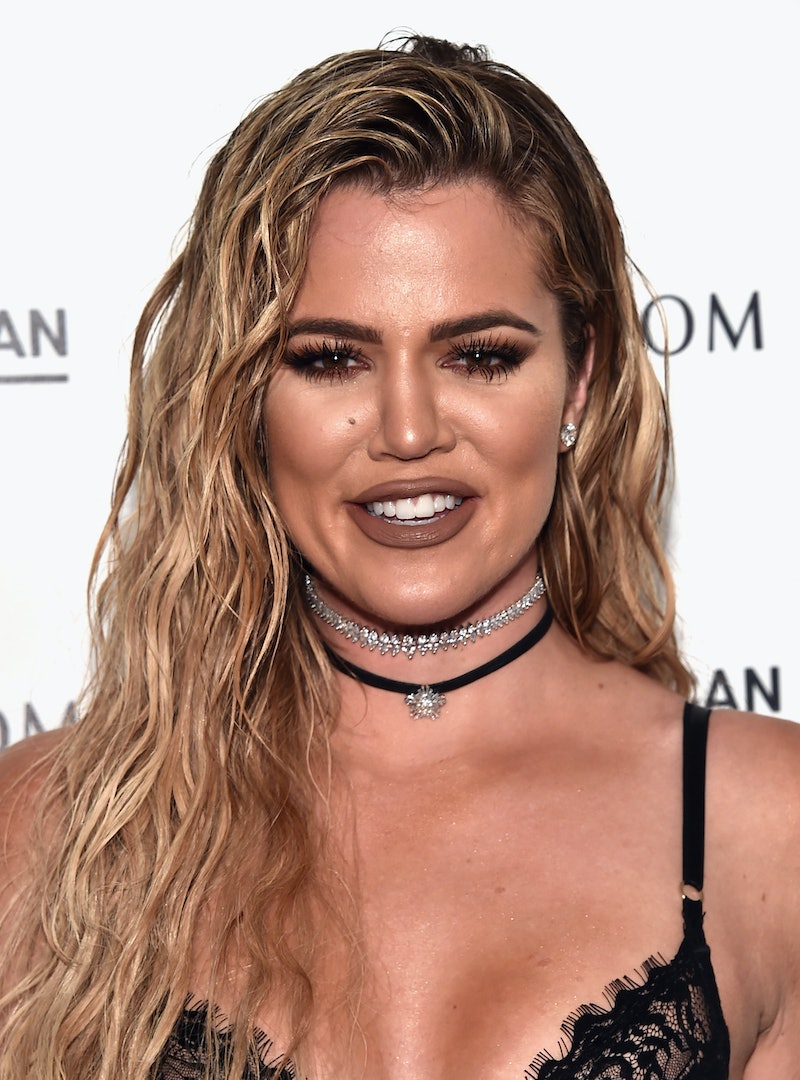 Khloe Kardashian is a hair chameleon. Whether she's brunette or blonde or rocking shoulder length or long locks, Kardashian is known for her hair changes. On Tuesday, though, it appeared as though Khloe Kardashian's haircut got a little bit shorter. However, with the Kardashians, it's honestly difficult to tell whether or not their hair has actually changed or it's just a clever styling trick or wig. While I seriously doubt Kardashian is donning a wig, her styling may just be trolling me.

While not all of the Kardashian and Jenner clan switch their hair up regularly — Kourtney Kardashian keeps her chic, long locks pretty consistent — youngest member Kylie Jenner is known for her changes. From multi-colored wigs to her now rose gold locks, she's a master at making headlines for her hair. Now, Khloe may be catching up to her. While Kardashian has been blonde for some time now, the length of her hair fluctuates, and it's certainly done so in her most recent Instagram image.

On Tuesday, Kardashian took to the social media platform with a photo of what seems to be a new, shorter, asymmetrical bob. While Jenner has been rocking a similar style, it seems like she went a bit shorter in back for a more dramatic look. Adding fuel to the fire is her caption, "BOB."

In another Instagram image from a few days ago, Kardashian can be seen with what appears to be a similar style with her hair straightened. While it's difficult to see the back, it still looks a bit longer than her current 'do.

Kardashian's curled style may, however, contribute to the seeming shortness. After all, it's not like we haven't seen this look before.

It's difficult to tell what length Kardashian's hair will be at any given point.

Just a few weeks ago at her Good American denim launch, her waves were gorgeously long and wavy.

If I had to guess, though, it looks as though Khloe Kardashian did, in fact, cut her hair even shorter. The result is total gold. It's chic, cool, and oh so Khloe. Even if it turns out not to be true, kudos to Kardashian's stylist for this bomb style.