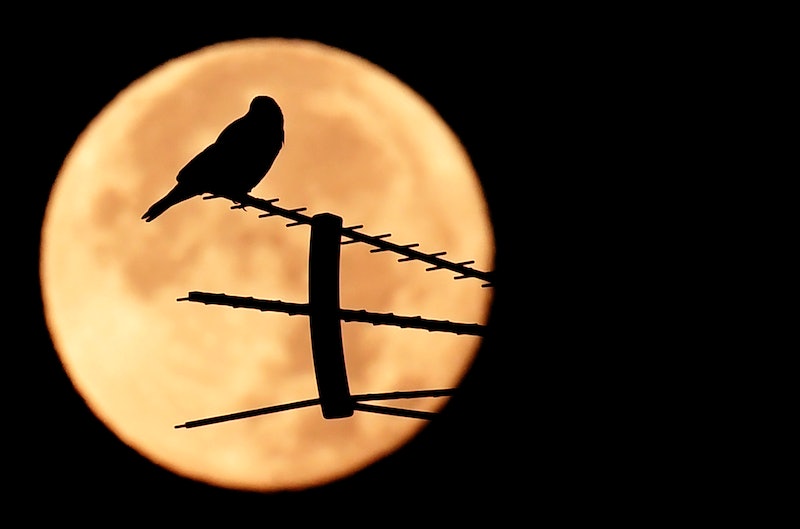 There's nothing like natural beauty to get your mind off earthly troubles, and come December all you will need to do is look up. Two remarkable celestial events are set to coincide — the last supermoon of 2016 and the Geminid meteor shower. So when is the next supermoon in 2016 going to take place, exactly? Stargazers have already observed two pretty spectacular supermoons this fall, so you may have noticed that the sky has been a bit brighter than usual on Oct. 16 and Nov. 14 — and as it turns out, you've got one more chance to see this spectacular sight before the year is out.

The November supermoon, which occurred just a few days ago, was particularly remarkable in that it was the closest full moon we'd seen since 1948. What's more, the likes of it will not be seen again for another 18 years. But if you missed that particularly stunning lunar event, don't feel too bad; December's larger-than-usual moon will still be pretty darn instagrammable. Make sure you write in a calendar reminder or set a Google alert for the supermoon's peak on Dec. 14, for your last chance to see this celestial occurrence in 2016!

With three supermoons in three months, this celestial occurence has been all over the news, but the term "supermoon" has only been popularized in recent years. The name is credited to modern astrology — not astronomy, as one might assume. According to PBS, astrologer and "world forecaster" Richard Nolle coined the term "supermoon" in an article in Horoscope Magazine in 1979. Originally, Nolle said a full moon only qualified as a supermoon if it was within 90 percent of its closest point to our planet in its orbit of Earth, but it is also used broadly to refer to most "larger-than-average" full moons.

Astronomers refer to these big, bright, beautiful moons as perigee full moons; the term "supermoon" is more colloquial in nature. Here's what that means: The moon completes a full revolution of its elliptical orbit of Earth every 27 days (plus a few hours). Since its orbit is not a perfect circle, at one side of the orbit, the moon is farther away from our planet, and at the other it is closer. The difference between its closest point, known as "perigree," and furthest point, referred to as "apogee," is approximately 30,000 miles. This means that a supermoon will be appear to be as much as 30 percent brighter and 14 percent larger than a apogee full moon. Depending on weather conditions this difference might not be as noticeable as one might hope. Cloud cover can mute the brightness of the moon, and light pollution from cities can obscure its brilliance. To get the full show, you want to view it from a dark location, preferably with some kind of natural landmark around to highlight its difference in size.

This big, bright globe will will obscure another astronomical event this year, too: The Germinid meteor shower. The meteor shower will peak on Dec. 13, but is best viewed around 2 a.m. local time (early morning of Dec. 14). If these notoriously bright meteors manage to overcome the moon's glare, they will delight night owls everywhere. The meteors will appear to radiate from the Gemini constellation (hence their name), but that doesn't mean you should try to orient youself towards a particular point in the sky. To best view the show, simply lay back and stare up at the dark expanse. But befoe you grab your sleepingbag, NASA warns that the supermoon's interference may "reduce the visibility of faint meteors five to 10 fold, transforming the usually fantastic Geminids into an astronomical footnote." Expect a dozen per hour, the bright ones should still be visible.

More like this
How To See The Lunar Eclipse On May 15-16, 2022
By Kaitlyn Wylde
Your June 2022 Monthly Tarot Reading
By Jezmina Von Thiele
Here's Your Horoscope For Memorial Day Weekend
By Mecca Woods
5 Crystals To Manifest More Self-Love
By Megan McCarty
Get Even More From Bustle — Sign Up For The Newsletter