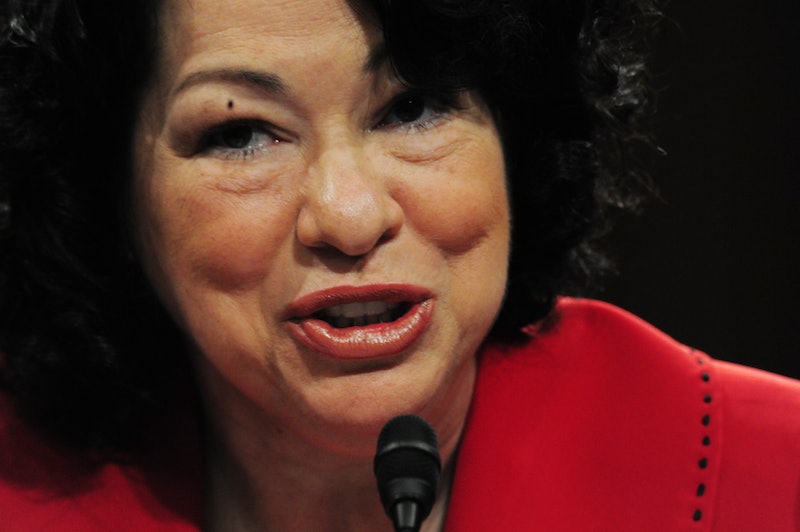 While many Americans are still trying to adjust to the new and unexpected president-elect of the United States, Donald Trump, Democratic leaders are taking it in strides and sending messages of good will and peaceful transitions. (I would like to point out how this stands in stark opposition to how many Republicans reacted to the first African American president; focusing on making him a "one-term president," as Sen. Mitch McConnell proclaimed). Most recently, Obama appointee Supreme Court Justice Sonia Sotomayor's response to the Trump victory sets the right tone on how to move forward: you don't have to like it, but you should still be an American about it.

Tuesday evening, exactly one week since the results of the presidential election, in an interview with Bill Press in his lecture series Talk Of The Hill, Sotomayor was asked what was a potentially dicey question for a member of the highest court in the land during this hectic transitional period in government. Press came out swinging, in what he referred to as an attempt to address the "800-pound gorilla in the room," asking: “Are you in any way apprehensive about what happened in this nation last Tuesday?” Sotomayor considered the question carefully and approached it as diplomatically as possible:

I’m going to demur from answering that question that way... I will answer it in a different way, which is I think that this is the time where every good person has an obligation both to continue being heard and to continue doing the right thing ... We can’t afford for a president to fail. And it is true… that we have to support that which he does which is right and help guide him to those right decisions... But we can’t afford to despair, and we can’t afford to give up our pursuing of values that we and others have fought so hard to achieve. And so for me, this is a challenge. So I’m going to continue doing what I think is the right thing. That’s the challenge we all have to face.

From my perspective, Sotomayor is setting the right example: I was trying to think of an analogy... it's like there are two parents who are responsible for a child together but fundamentally disagree on how to raise a child in just about every way. They love their child (America) very much, but one parent (Trump/ GOP) thinks you should do things like leave a kid out in the cold to toughen 'im up and the other parent (Dems) thinks that's absurd. But the fact is, the longer you argue about which ideology is "right," the longer the kid is on the way to freezing to death.

Sotomayor's statement remind me that both elements have the best interest of the country at heart. And perhaps, if we can find commonality in that, our country will progress positively.