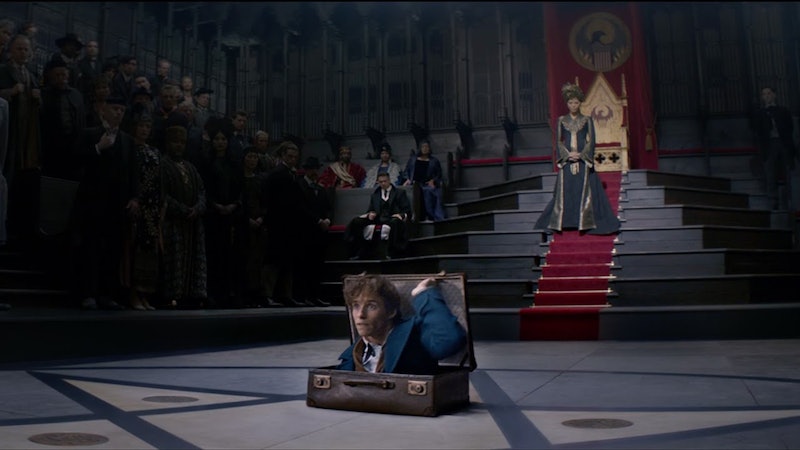 There are people in the world who don't know or like Harry Potter. So I hear, at least. I personally don't know any of them. The book and movie franchises are both juggernauts, financially. And J.K. Rowling's Wizarding World and its inhabitants have permeated all corners of pop culture. Watch public figures stump for their Hogwarts house; listen to "Wizard Rock" (or "Wrock") — an entire music genre devoted to honoring Harry Potter in song; and count all the recent political references to horcruxes, Death Eaters, and other Voldemort-related things. Those references do go over some heads. I'm talking right now to a portion those people — people who haven't read or seen Harry Potter, but who are intrigued by Fantastic Beasts And Where To Find Them, out Nov. 18. Though the movie is an extension of the universe presented in those other movies, you don't have to have seen Harry Potter to enjoy Fantastic Beasts.

Here's the deal, newbies: Fantastic Beasts And Where To Find Them is a prequel to all eight Harry Potter movies. Daniel Radcliffe isn't in it. Neither is Emma Watson. The Harry Potter franchise is set in the '90s. Eligible wizarding students receive their Hogwarts acceptance letters when they're 11. Harry starts school soon after his birthday in 1991 and the series continues from there.

That vintage fashion you see in the Fantastic Beasts trailers is there for a reason. This movie is set in 1926; it's not like modern American witches just have a thing for cloche hats. The main characters of the other franchise haven't been born yet in this film (aside from Hogwarts headmaster Albus Dumbledore, but don't worry about that right now), so trust me, you haven't missed anything.

You won't be lost in the story, but don't forget that you will be entering an established universe. The Harry Potter books and movies contain a lot of information about Wizarding World customs and history, some of which will certainly come into play in Fantastic Beasts. But those references will be Easter eggs to add color and enrich the experience for O.G. fans. They won't make the movie impenetrable for new ones.

In fact, Fantastic Beasts is a great entry point. Rowling wrote the screenplay for Fantastic Beasts and announced that Warner Bros. is planning to release four more Fantastic Beasts movies over the next several years. When Rowling spoke to The Evening Standard at the London premiere of the film, she eased the fears of moviegoers who missed out on the Harry Potter phenomenon while also confirming that Fantastic Beasts does call back to that franchise "to an extent." Rowling said:

"I’m very excited because you don’t have to have seen Potter to enjoy this. That was my ambition. We’re going back in time, you can’t rely on anything you already know."

Listen, I am strong in my belief that everyone should have the joy of Harry Potter in their life. But a lack of Hogwarts awareness won't spoil Fantastic Beasts for you. If you do any preparation at all, just give Albus Dumbledore's biography a quick glance for some basic context. After that, you'll be ready to enjoy Fantastic Beasts And Where To Find Them as it was meant to be enjoyed: by anyone who wants to see Oscar winner Eddie Redmayne wrestle with some magical CGI creatures.

More like this
Sadly, 'Fantastic Beasts: The Secrets Of Dumbledore' Isn’t Streaming — Yet
By Arya Roshanian
Harry Styles Is Set To Rival Tom Hardy With His Own CBeebies Bedtime Story
By El Hunt
Fans Of 'Anne With An E' Will Recognise 'Stranger Things’ Vickie Immediately
By Rachel Mantock
'Bridgerton' Star Nicola Coughlan Confirms Season 3 Will Focus On Colin & Penelope
By Grace Wehniainen and Alyssa Lapid
Get Even More From Bustle — Sign Up For The Newsletter