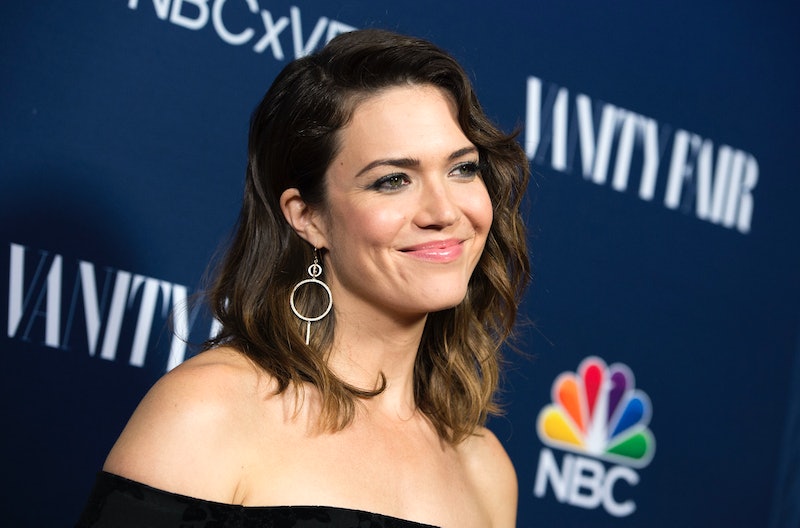 Back in the late '90s and early '00s, Mandy Moore delivered bubblegum pop hits like "Candy" and "I Wanna Be With You," even touring with *NSYNC on one very memorable (and very late '90s/early '00s) road trip around the country. And while hearing the names "Mandy Moore" and "*NSYNC" together is like taking a giant sip of warm nostalgia for fans, it elicits something a little different for the This Is Us actor. In fact, Moore recalled the time that Justin Timberlake embarrassed her during Tuesday night's episode of The Late Late Show With James Corden. And honestly? It's innocent enough, but he pretty much owes her an apology for this one.

Still cringing at the memory 16 years later, Moore set the scene: The *NSYNC guys and everyone's backup dancers were sitting around, comparing shoe sizes because of course that's something that guys do. 15-year-old Moore pops in, literally in awe of JT, who immediately takes to work crushing her dreams (unintentionally, of course, but still — c'mon Timberlake).

"I stroll up, at 15, like freaking out that Justin Timberlake is there," Moore recalled. "And he's like, 'You have big feet for a girl.'" Cue the audience groaning in sympathy.

"I'm sure he doesn't remember this at all," she clarified. "But I was so impressionable. I thought the world of him. He was on a pedestal. 16 years later it stuck with me."

"It really scarred me emotionally," she said, half-jokingly. "... I was going through puberty at the time. You know what I mean? It was embarrassing."

And trust me, I get it: For Timberlake, it might have seen like a one-off comment, something you say that seems completely innocent in your head — but to hear those harsh words out loud, coming from the mouth of someone you greatly admire and who is insanely popular at the time, that has to sting. (Also, way to stick to those gender norms, JT.)

Sure, it's 16 years after the fact, but now that Moore has gone public with the revelation, it's probably time that Timberlake tweets her out an apology. That's all I'm asking. Mandy Moore deserves it, and it would keep this nostalgia train rolling, too.