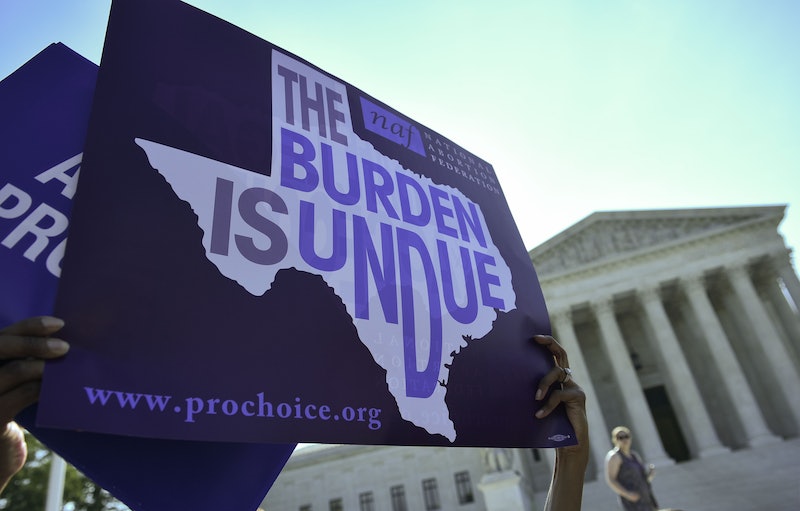 Conservative forces emboldened by Donald Trump's Nov. 8 election aren't wasting any time honing in on one of the right's favorite social restrictions: abortion. A bill introduced in the Texas House of Representatives on Nov. 14 seeks to make the state one of the strictest abortion regulators in the country, denying women the right to choose in some of the most extreme and emotional cases of pregnancies gone wrong. Texas women will need help securing their abortion rights, because no woman should be forced to carry a pregnancy she doesn't want.

The new bills would prohibit women from accessing abortion in the case of fetal abnormalities and mandate the burial or cremation of fetal remains for abortion, miscarriages, and stillbirths. Senate Joint Resolution 9, the bill's official title, generally seeks to ban abortion to "the fullest extent authorized under federal constitutional law as interpreted by the United States Supreme Court," indicating that the lawmakers have little to no regard for women's personal needs or choices when it comes to reproductive rights.

Few other states in the country have laws this strict, with the exception of North Dakota and Indiana (though Indiana's law was struck down in federal court).

There are a few ways to help Texas women keep their abortion rights safe from this assault on their freedom of choice. First, even if you don't live in Texas, you can call state legislators to let them know you oppose the bill — you can find the entire list of legislators and their contact information online. Next, donate to NARAL Pro-Choice Texas, an advocacy group that works to change laws and minds about the importance of reproductive autonomy, or any of the regional organizations listed here.

Texas already has a stark lack of abortion providers, particularly in rural areas that make up a vast portion of the state, and women often struggle just to get to the few remaining open clinics. Helping them with transportation and lodging costs will keep them from trying to perform unsafe, at-home abortions, which have very likely increased since the state began tightening its regulation.

But probably the most important way you can help Texas women is by consistently and actively calling out all the moral flaws of laws like SJR 9. It's absolutely crucial to make people understand why abortion needs to be a freely made choice, without the law preventing women from living the life they want. In this particular case, a woman can no longer choose to save her child from suffering a short life and painful death, and instead must prolong her own pain pointlessly. For all parties involved, this law will create more pain and suffering, and that's the last thing a woman struggling with this situation needs. It is all Americans' duty to fight for these women's freedom, because abortion should not be a choice made in a capital building.