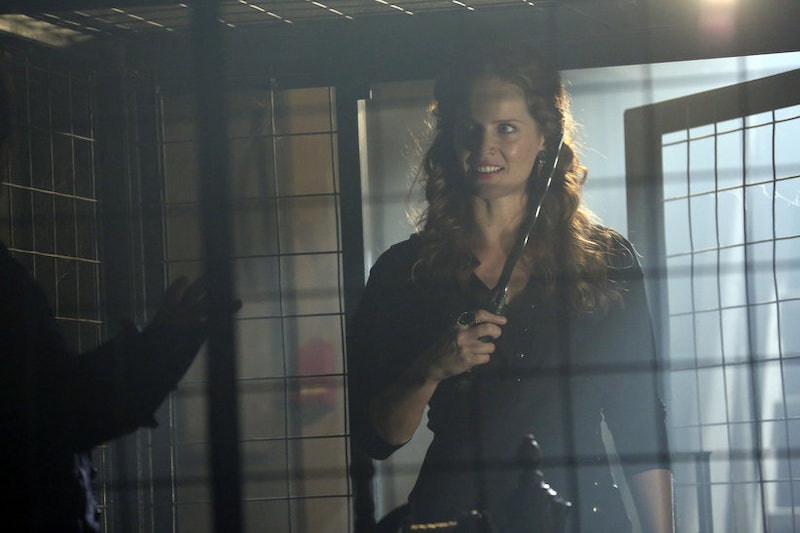 We're two episodes into the Wicked Witch's arc on ABC's Once Upon A Time and no one's nearly as scared as they should be. But after Sunday night's episode, they might have finally started to realize who they're dealing with. We knew Rebecca Mader's Wicked Witch was as evil as they come and she's down to cause as much damage as possible, but we didn't know how scared of her we needed to be until now.

Since the show's midseason premiere, we've learned a lot about Storybrooke's new villain — she's obviously more powerful than anticipated and she's got a huge score to settle. Which is cool, but now that we're pretty sure she doesn't care who she hurts to get to Regina, things just got interesting. And a hell of a lot scarier. OUAT's villains always have a creepy element (remember how Pan was actually Rumple's father, weird) but we're more terrified of the Wicked Witch than we were of Pan. Even if both of their goals were the same and their motive is basically that they're just whiney children.

On Sunday night, Mary Margaret and David had the enemy in their home — which had us ripping our hair out because they had no idea how creepy she was. She drugged David's tea, which is really just psychotic. Why is she even targeting him? And later on in the episode, Emma and Hook discovered her creepy lair in the woods — complete with storm cellar prison. It definitely doesn't bode well for our favorite fairytale characters that three episodes into her run on the series, we're terrified. Here's why NO ONE should be underestimating the Wicked Witch:

I know, Pan's Lost Boys had arrows laced with poison — but this is different. There's something much more sinister about putting powdered root of some hallucinogen into someone's tea when they're not looking. Especially when that person has a pregnant wife and you're trying to live in their apartment with them and be her midwife.

Zelena put said powdered root in David's tea because it was said to help the person "conquer their fears". What that really means is you're going to hallucinate and that image is going to call you out and threaten your life until you admit to what you're scared of. It's also going to creep you the hell out when the image it appears as is yourself, like in David's case. (Does this remind anyone else of the boggart in Harry Potter and the Prisoner of Azkaban?) This Witch is a psycho.

She's Got A Creepy Lair

Isolated and creepy-looking farmhouse in the middle of the woods? Zelena's got one — and it has that same Instagram-filtered look as the town of Ravenswood. Why is it so creepy? Because it's a farm house in the middle of the woods and she clearly feels comfortable being out their, as far from help as possible, because she's scarier than anything that could cause her trouble. (Now I'm having a True Detective flashback.)

She's Got A Storm Cellar Prison

I know, villain's lairs frequently come complete with their own prison. But Zelena's is in her storm cellar, which makes sense with the Wizard of Oz references her character brings, but is still creepy as hell. And now that we know that she's been hiding Rumpel in there all of this time while he acts like Gollum, we'll never look at a prison cell the same way again. There's just something about keeping your prisoner underground, too, that really just gives us the creeps.

First of all, those flying monkeys are epically more horrifying than the originals — thanks, CGI. Second, they're all people that've gotten too close to the town line and since Neal is missing, we know that he's one of them. That's a pretty evil way of building an army, considering she's discriminating against no one and no one really has a choice in whether they want to join or not. Also, she sent one of those monkeys to NYC to spy on Emma and try to get her to marry him. That's just the worst.

Regina, Rumpel, and Pan were powerful, but they were/are nothing like this. Which might be why Zelena scares us so much, because even in Regina and Rumpel's worst moments, they weren't this evil. Or at least, their powers didn't seem quite so sinister. Zelena's powerful and she has no intention of holding back — not even a little bit. And power that's fueled by anger and knows no bounds should scare everyone, especially when they're not entirely sure who it's coming from.

So, Mary Margaret and David should probably reevaluate their midwife choice and their terms on trusting strangers — just a quick suggestion.