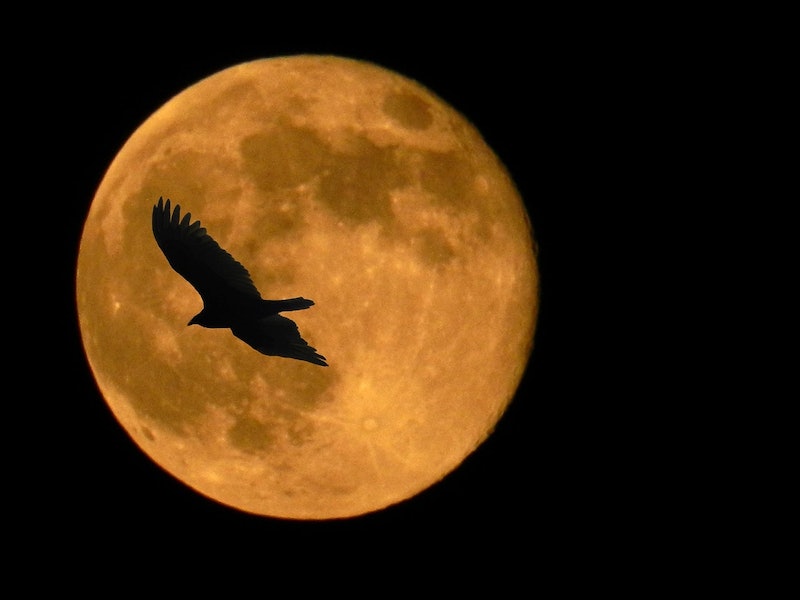 Stunning pictures of November's supermoon, the biggest and brightest in 68 years, lit up social media on Monday night. But those without an instagram-worthy view of this celestial sensation still managed to get in on the fun with a foody substitute. These tortilla supermoon pictures, which replace the full moon with a big flour tortilla (sometimes charred for effect) are now going viral, proving to be the tastiest meme since Pizza Rat.

After a particularly tough week, we can all use a little humor amidst the political tumoil — and the tortilla supermoon meme is here to help! While the memes of Joe Biden pranking Donald Trump have been giving the Internet some much needed comedic relief this weekend, the pics of a tortilla pranking the supermoon are perfect for those who need a brief break from politics. The only danger: Looking at these memes will probably make you hungry.

Though the meme started to trend on Monday, Nov. 14, the tortilla in the window schtick has been around for quite some time. According to meme database KnowYourMeme, way back in Februrary, Twitter user @savannimalz posted a picture of a tortilla as a moon substitute with the caption "The moon looks beautiful tonight." The original image didn't cause a ruckus until November, however, when it quickly gained thousands of likes and retweets.

Despite its innocence, this meme has its critics. Some are bemoaning the waste of a perfectly good tortilla, which many believe should be used to make a tasty quesidilla instead of sharable internet content. I don't know if the five second rule applies to windows, but... well, you be the judge.

I have to admit, I actually missed the extra-super supermoon on Monday (like many Americans, I have been too busy spending my evenings wrapped in blankets, rocking back and forth and raging about myfeelings). We may not see another supermoon as brilliant as the one on Nov. 14 again until 2034, but those who missed the lunar event shouldn't feel too bad. You can now make a supermoon in you very own home — just stick a flour tortilla in your window! With the last supermoon of 2016 set to rise in the night sky on Dec. 14, I believe we're going to be seeing a lot more tortillas.

For those who missed it, here are some of the best "supermoon" pictures from around the globe captured on film. See if you can really tell the difference:

Can't See The Moon Because Of City Light Pollution? There's A Tortilla For That!

If You Don't Have A Tortilla Handy, Just Use A Wrap

The Similarities Are Uncanny!

Truly A Miracle Of Nature

This Dad Is A Prank Master:

I Can't Believe It's Not Moon!

Pro-tip: If you eat the tortilla, it becomes a lunar eclipse!