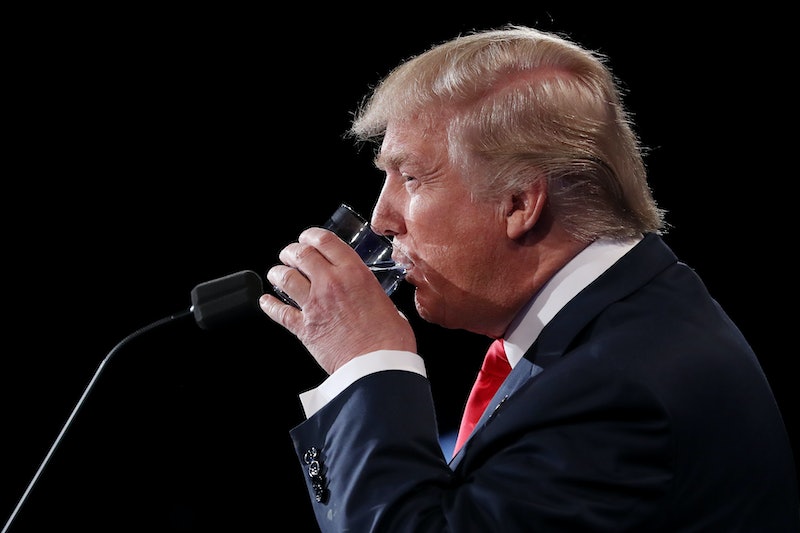 Despite losing the national popular vote, and by a margin which looks like it could near two million votes when all is said and done, Donald Trump won the electoral college comfortably, making him the president-elect of the United States. As such, maybe the gears in your head are already turning. Are there any ways Trump could be impeached over one thing or another, thus sparing the country one of its biggest leadership gambles (against the majority's will, no less) in its entire 240-year history?

The possibility has been getting a lot of air recently, thanks in large part to the fact that Trump has a fraud trial pending which is scheduled to take place prior to his inauguration (although his legal team is predictably trying to delay it). And political historian Allan Lichtman, who nailed the outcome of the 2016 race with his controversial "13 keys to the White House" analysis, publicly predicted an eventual Trump impeachment on CNN.

But it'd be a tall order, and it would require a considerable act of legal wrongdoing. In case you haven't thought about this since the Clinton administration, the articles of impeachment demand that a president commit treason, bribery, or "high crimes and misdemeanors" to be booted from office, and what that precisely means can be a matter of heated debate.

So how might a President Trump face impeachment? Obviously, it's impossible to predict with any specificity right now, seeing as he's not even the president yet. But here are some areas of Trump's political, business, and personal life that could come into play, judging from how his first week as president-elect has gone. Although it's worth remembering that Trump, like anyone, is innocent until proven guilty, and he's denied wrongdoing in virtually all of these instances.

The allegations surrounding Trump University are considerable ― like that it represented itself as an accredited educational program when it was actually more like a wealth seminar, or that unqualified instructors were hired, despite the suggestion that Trump picked them personally. Trump regularly points to the positive reviews his old Trump U customers signed after completing the program, although many of them have since admitted they were pressured into giving the program high marks.

While anything is still possible in this case ― Judge Gonzalo Curiel, the target of one of Trump's more infamously racist attacks during the campaign, has reportedly urged both sides to consider a settlement ― an actual jury verdict against Trump and his so-called university could grease the wheels toward a prompt impeachment effort.

2. Conflicts Of Interest In His Cabinet

If there's anything that's rapidly becoming clear, contrary to Trump's insistence to the contrary on Twitter, it's that his presidential transition isn't going so smoothly. Prospective staffers and cabinet members are in short supply, thanks to the president-elect's lack of experience, incendiary rhetoric, and a perceived lack of stability. As such, you're seeing some Trump loyalists like General Mike Flynn and Rudy Giuliani getting their names thrown around as potential appointments, despite the fact that both of them have been implicated in huge conflict of interest scandals in recent days.

In Flynn's case, the potential conflict reportedly stems from his consulting firm's lobbying work for the government of autocratic Turkish President Recep Erdogan. In Giuliani's case, he's reportedly been paid by an array of foreign interests since leaving New York City's government in 2001, including Venezuela, Qatar, and an Iranian dissident group.

3. All Those Sexual Assault Allegations

Trump has been accused of sexual assault and harassment by more than a dozen women in the last few months ― just one more thing that it boggles the mind to think didn't derail his presidential hopes. Needless to say, if Trump ever faced legal action over such an allegation, it'd open up the possibility of impeachment proceedings.

Trump has denied all these accusations, calling his accusers "horrible liars" and threatening to sue them once the election was over. Although, like his threatened lawsuit against The New York Times for publishing two of their accounts, there's been no follow-through on that so far.

4. Conflicts Of Interest Stemming From The Trump Organization

In the run-up to the election, Trump assured the country that he'd avoid conflicts of interest relating to his intricate, highly complex business empire by having his children run the company in a "blind trust." That's not actually a blind trust, since Trump knows full well what his company's assets are, and it'd be run by his immediate family. But for some, presumably, this excuse was adequate.

Now, however, it's becoming clear that the potential conflicts of interest are thickening, not going away. Trump has actually put three of his adult children on his transition team, and he wants his son-in-law Jared Kushner to get security clearance to join his daily presidential briefings.

5. His Dealings With Russia

After the campaign season we just saw, there were also the topics of Trump's ideological closeness with Russian president Vladimir Putin, his reported reliance on Russian investors, and the U.S. government's assertion that Russia was deliberately trying to tamper with the election at the forefront. You can be sure that people will be following the incoming president's relationship to America's rival global superpower closely, and with great interest. In the event there's a major scandal involving his ties to Russia, his decision-making as president, and his own business interests, there's no telling how big it could be.

6. Any Crackdowns On Press Freedom

Trump's made no secret of the fact that he'd like things to be tougher for the American press, even suggesting during the campaign that he wanted to "open up the libel laws." In reality, there is no federal libel law. But alongside his constant, vicious demonization of the media at his campaign rallies, it's very clear that he has an antagonistic view toward the media. And since winning the election, he's already ducked his protective pool more than once, a breach of protocol that shouldn't go overlooked.

Obviously, simply restricting press access isn't a crime. It's not even a law that presidents have to hold daily White House press briefings ― just a tradition. But antagonism of the basic norms and healthy functions of society can sometimes lead to actionable wrongdoing, and Trump's attitude towards the press is something to pay attention to.

7. Whatever Bizarre, Shocking Things He'll Do As President

I mean, let's be honest: You don't know what he's going to do, and neither do I. Simply put, after the campaign everyone watched for all those months, who can honestly say they couldn't imagine the whole administration going down in some towering, shocking moment of self-immolation?

Of course, there's a necessary acknowledgment in all this: It's the U.S. Congress which actually holds impeachment hearings, and as it stands now, both houses of Congress are controlled by the GOP. In other words, absent some incredibly damning, clear, undeniable proof that Trump committed an impeachable offense ― more clear and plain than a video of him bragging about the same kinds of non-consensual groping he's been multiply accused of, apparently ― impeachment is probably more fantasy than reality.

There is perhaps one possible exception. If Trump actually bucks the Republican Party on some crucial issues (which is not impossible, based on his past statements on some hot-button issues), party leaders might start to think "Huh, wouldn't be that bad if Mike Pence were president." In fact, if you're looking for the single most likely impeachment scenario, that's probably it: Congressional Republicans wanting to see Pence at the helm, rather than an erratic real estate magnate.