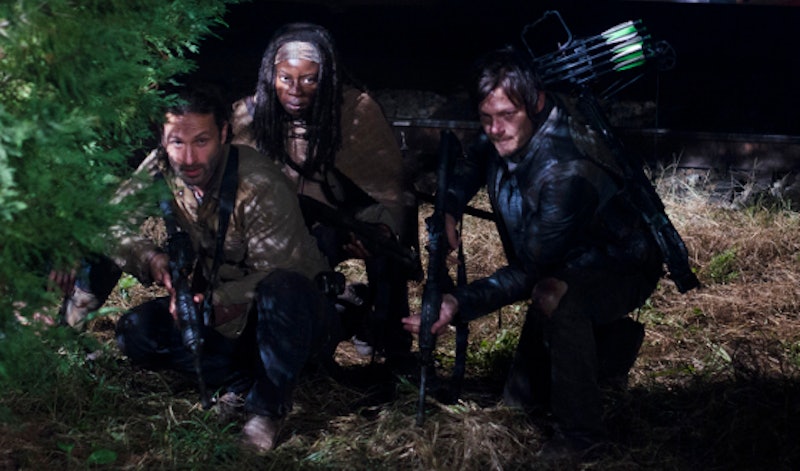 Anyone who's been watching the fourth season of The Walking Dead knew going into Thursday's finale that at least one major character was going to die. The only question was who. The various groups have been heading towards Terminus, seeking its promised safety, while viewers feared what Terminus was actually hiding. It turns out, we were only right about Terminus, because in a twist no one saw coming, everyone survived.

Well, everyone we like. Daryl's new group found Rick and in an extremely disturbing showdown, Rick, Daryl, Michonne and Carl took them down. Everyone else, however, is still alive. We didn't get an update on Carol, Tyreese and Judith, who haven't made it to Terminus yet, and Beth is still missing, but the rest of the group is definitely alive — for now.

We left them in a very dangerous place. The significance of episode's title, "A," became clear, as Rick's group, along with Glenn, Maggie and their newfound allies, are trapped in a train car with Terminus's leader Gareth and other heavily armed residents surrounding them. The motives of Terminus are still a mystery, but forcing visitors to hand over their weapons while everyone else is completely armed before trapping them in a train is not exactly a good sign.

So don't let your guard down just yet. The Walking Dead might have let everyone survive the finale just to kill them off in next season's premiere, when fans least expect it. If the show's writers wanted to ensure fans would return for Season 5 in October, they succeeded. It's going to be a long six months.