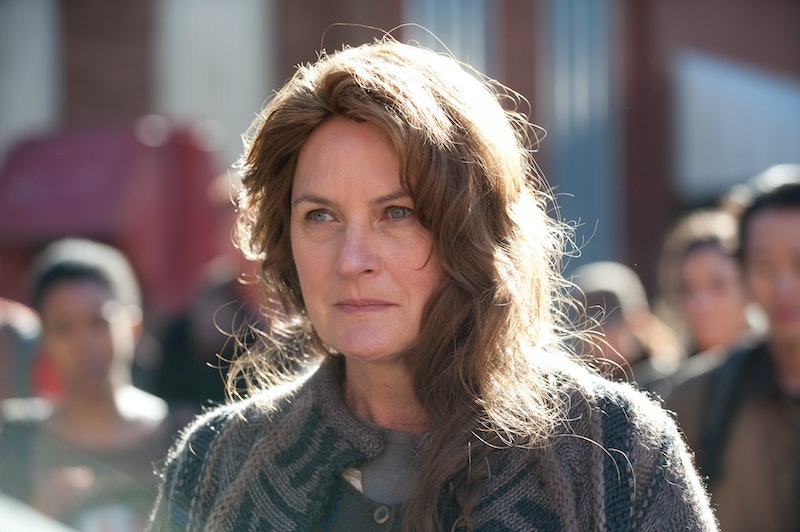 It's hard to believe that on a show where zombies lurk around every corner, the biggest threat could come from a middle-aged woman with a side braid and penchant for layering. But that's where The Walking Dead is heading with its fourth season finale. The second half of the season has followed the prison's survivors as they make their way down the railroad tracks towards this promised sanctuary. Some arrived in last week's "Us" and it seems that the rest will make it there for Sunday's finale, so we have to wonder, what exactly is happening at Terminus?

First there was speculation as to what Terminus actually is, a compound of some kind? Atlanta? The comics' Alexandria Safe-Zone or Sanctuary? Now that we've actually gotten a look at Terminus and it's a cluster of small buildings with gardens and a grill, many of those options have been disproven, but we still don't know exactly what Terminus is. The only thing we can pretty sure of is that it's not what it claims to be.

"Sanctuary for all. Community for all. Those that arrive survive." If that's the case, why was it so empty in the middle of the day, when Glenn, Maggie and the others found it? The only person in sight was that woman, Mary, who smiled and offered to make them a plate of food so serenely that it was creepy. And if anyone thinks Mary or Terminus deserves the benefit of the doubt, one Tumblr user noticed that we actually may have seen her before — and it was not a good introduction. Remember when Michonne and Carl searched a house in "Claimed" and stopped to look at its paintings?

That is quite a resemblance, and black X's over someone's mouth, surrounded by red streaks and the word "NO" is a huge warning sign. We can only hope that when Michonne makes it to Terminus, she remembers the paintings, or at the very least, that her suspicious instincts kick in.

Since all signs point to danger, here are some of the terrible things that Terminus might be hiding.

Since viewers were first introduced to the idea of Terminus, there have been theories that it is actually The Sanctuary from The Walking Dead comics, just with a fancier name (possibly to avoid spoilers). If it is The Sanctuary, that's not a good thing, despite the misleading name. The Sanctuary is run by a man named Negan. It's more of a cult than a safe haven and Negan has absolutely all of the power. He becomes a villain in the comics and things do not end well for some key characters.

It's still possible that Terminus is The Sanctuary, but not too likely. In the comics, The Sanctuary is a large former factory, surrounded by many barriers including a large fence and wall of impaled walkers. Terminus, meanwhile, didn't seem too large and was extremely easy to access, with just an unlocked fence in front of it. Additionally, the only new character revealed to appear in the show's finale is someone named Gareth, who isn't in the comics. According to The Hollywood Reporter, Gareth will be "a remix of sorts of an unidentified character from the series," but Negan is too important a character to change so much and the actor cast doesn't seem nearly as intimidating enough to portray him.

A possible explanation, but not the strongest.

What was on that grill? It would be a horrific, disgusting twist, but after the whole Lizzie debacle in "The Grove," I wouldn't put anything past The Walking Dead. "We'll make you a plate" could be the spin off of the classic sci-fi story To Serve Man, which is about alien emissaries who wish to serve man... as a delicious dish (EW's Dalton Ross has a similar theory). This would explain why Terminus seems to have so few residents and why they're so inviting of all strangers.

Think about it, why else would a supposed sanctuary do so much advertising? There are only so many resources in the world of The Walking Dead, and sure, Terminus has a garden, but it didn't seem like enough to serve anyone who's ever stumbled across one of their maps — unless Mary was planning on serving them. Maybe don't watch the finale with a full stomach.

Terminus might function efficiently enough to support many people because they are all kept in constant fear, 1984-style. Within those walls could be a lot of people performing chores and quietly waiting for their allotted food and turn to go outside, terrified of violent punishment for any infraction. It could be similar to how the Governor made people fear ever leaving Woodbury and kept them entertained with zombie fights, but worse.

All who arrive might survive, but Terminus wouldn't be a real community or sanctuary of any kind.

Mary is a Lone Psycho

In the same house where Michonne found the painting that is probably Mary, she also found a kids' room containing two dead children. This is a dark theory but The Walking Dead is a dark show (especially recently) and it could be possible that Mary went crazy and killed her children, without any cause from a walker-induced injury. That act could have made her even crazier, leading her to eventually find Terminus, where she gardens, cooks and lures in people in need. What then could happen at Terminus is still a mystery, though I think we can agree that it definitely would not be good.